Sitting on my desk next to me as I type this are two smart phones: the Samsung Galaxy Note and the Motorola Droid Razr M. Of the two, I prefer the Razr M, for one simple reason: it's that much more, well, mobile.

When smart phones first started to proliferate, they embodied a search for a useful size beyond just the desktop PC and the traditional notebook. Many people, who might have otherwise been saddled with a full-blown computer tricked out with features they might never use in the first place, do just fine with an iPad or an Android device. It's not the death of the PC, a common misconception. It's the growth of a separate kind of device outside of the PC.

Back in August when I wrote about the then-to-be-unveiled Galaxy Note II, I felt like Samsung was throwing a whole bunch of different form factors at the wall to see what stuck. Not a bad plan, especially because a company of Samsung's size could easily get away with such a shotgun-spray strategy.

The original Galaxy Note might have been big (does 14.5 x 7.75 cm device fit in your pocket?), but it was no flop. It sold some seven million units as of June, and continues to do well despite Apple threatening further legal action against Samsung. 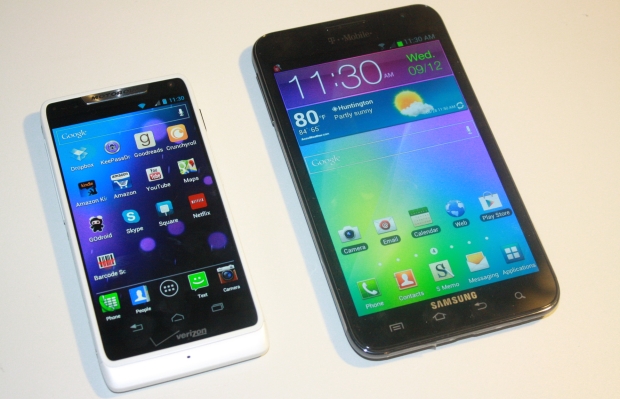 And yet, apart from the Note's gorgeous screen--the display alone for the Note is bigger than the entirety of the Razr M--there's not much more about it that commands my attention. Despite being outfitted with power management tools, it has trouble with getting through a full day on one charge. It takes forever to come up to a full charge due to the sheer size of the battery, and that's with the wall wart, not through a USB port. Its handwriting/note-taking functions, complete with an included stylus that's faintly awkward to use, are more gimmicky than valuable. Its performance is indistinguishable from the Razr M's.

The Razr M, on the other hand, doesn't force me either to get larger pants pockets or rely on a Bluetooth earpiece for casual calling. Its display isn't gigantic, but it more than makes up for it in brightness and clarity. A single charge lasts all day and then some, thanks to the power management functions in the phone, both native and user customizable. It doesn't take all day to come up to a full charge, and it's a solidly put together piece of hardware, a long shot from those early throwaway Motorola smart phones. Even typing on the Razr M's smaller screen is no hassle thanks to one of the better predictive input systems I've used on a phone.

Odd thing is, I wanted to like the Note. I admire it on a technical level, the way I admire a roller coaster for its engineering but have no inclination to ride it.

I don't find the Note a good fit for my lifestyle or my work habits, not just because of its size but because so much of what's been put into it has the aura of a solution in search of a problem. The engineering required to create the stylus system for the Note--which ostensibly helped give the phone its name--is impressive, but it's ultimately about as useful as painting with one's elbows. (Besides, how many people do you know walk around saying, "Dang, I can't use my phone like a notepad! Someone fix this!"?)

A big display isn't an automatic win, either. When the first cassette Walkman was introduced, and later the first MP3 players, I remember more than a few audiophiles turning up their noses. But more people were willing to give up audio quality for the sake of portability. Likewise, a small screen--as long as it's bright, colorful, and sharp--can be a solid draw for those who get their YouTube to go.

Much as I like the idea, and the size, the Note is a novelty. The Droid Razrs? Well, they're tools. 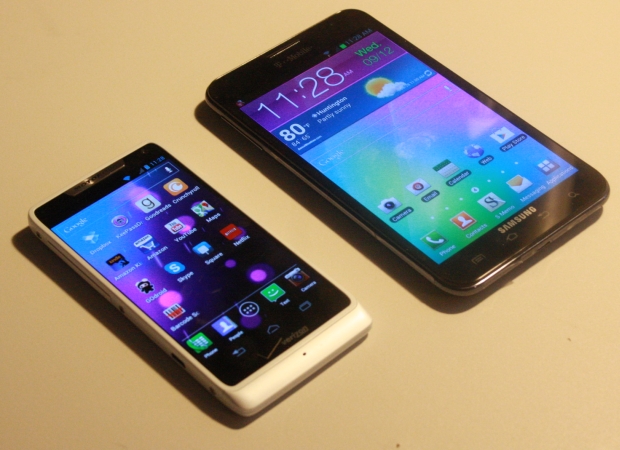