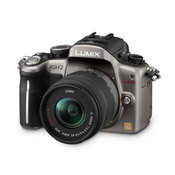 (click image for larger view)
Panasonic Lumix GH2 Mini DSLR Camera
Panasonic has launched a compact DSLR camera that fits in the palm of a person's hand and supports the company's interchangeable 3D lens. The Lumix GH2 can record full high-definition 1080p video, and can shoot still images at maximum resolution at 5 frames per second. The 16-megapixel camera has an HDMI output for showing video or images on an HDTV.

The GH2, like its predecessor the GH1, is what Panasonic calls a digital single lens micro, which is basically a compact camera for digital single-lens reflex photography. A DSLR camera, favored by professionals, supports interchangeable lenses and uses a mechanical mirror system and five-sided prism to direct light from the lens to an optical viewfinder in the back of the camera.

Besides its size, a key feature of the GH2 is its support for Panasonic's upcoming 3D Lumix G 12.5mm/F12 lens. Panasonic announced plans to release a 3D lens for select Lumix cameras in July, saying it would be available in October for $1,400. The lens adds the illusion of 3D in an image through the use of two optical systems within the lens mount. The systems capture two different views of the image, which are then processed through Panasonic's 3D processing system. The vendor says 3D images, even close-up shots, can be viewed on Panasonic's 3D Viera televisions.

The camera has a removable SD Memory Card for storing video and images that can be inserted in the supporting slot of a Viera TV or a Panasonic Blu-ray disc player. The optional HDMI connector can also be used.

The Lumix GH2, introduced Tuesday, is scheduled to be available in black and silver in early December. Prices will start at $900 for only the camera body. Body/lens kits will be available for $1,000 and $1,500.