RFID isn't changing the world, but it's being used strategically in government and business to track animals, stock products, and tag documents. 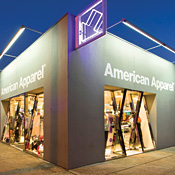 American Apparel tracks each and every garment.
RFID was expected to change retailing forever. That didn't happen. Then it was expected to make the pharmaceutical market safe from counterfeit drugs. That didn't happen either. Still, the tracking technology has grown into a $5-billion-a-year industry, and shows up in lots of places--passports, transportation passes, livestock, hospitals, and in some instances, retail and pharmaceuticals.

Radio-frequency identification technology was a niche technology until 2003, when Wal-Mart ordered its suppliers to put electronic product codes on pallets and cases of goods going to its warehouses and stores. Wal-Mart hoped to use EPC tags, which store details about products and transmit them to inventory systems using RFID chips and readers, to create a more-efficient supply chain. These tags hold more data than standard bar codes and can be read from a dozen feet away.

But only about 600 of Wal-Mart's 20,000 suppliers have joined the effort. Suppliers such as Procter & Gamble and Kimberly-Clark are no longer the public advocates of RFID they once were. The technology is complex and costly to implement, requiring investments in the chips (ultra-high-frequency tags still run more than 7 cents apiece), readers, software, and new business processes. Some Wal-Mart suppliers have had problems with liquids and metal in their products interfering with readings, and, even more than the technical obstacles, many companies remain unconvinced they'll see a reasonable return on investment. Wal-Mart has pulled back on its original mandate: It still uses RFID in its stores and distribution centers, but doesn't require its suppliers to use it. However, in a meeting with financial analysts last month, CIO Rollin Ford said Wal-Mart is "still bullish" on the technology and remains committed to it.

Wal-Mart's vision of a vast, RFID-enabled supply chain hasn't materialized--tags for pallets and cases of retail goods accounted for just 10% of about 2 billion RFID tags sold worldwide in 2008, says research firm IDTechEx. But it has helped spawn an ecosystem of companies making RFID chips, readers, tags, and software, and consulting on their use. When opportunities failed to blossom in retail as expected, those companies went elsewhere. Initially, pharmaceuticals looked promising, particularly after California passed its electronic pedigree law to improve drug safety and reduce counterfeiting. It required manufacturers to use EPCs to track drugs as they moved through the supply chain. But the law, which was to go into effect this year, proved too costly and complex to implement, and the pharmaceutical industry won concessions that pushed implementation back to 2015.

But false starts in retail and pharmaceuticals haven't killed RFID. Sales of RFID tags, readers, software, and services will reach $5.56 billion this year, up from $1.9 billion in 2005, IDTechEx predicts.

One place where the technology is being rapidly adopted is in the public sector, where contracts have longer lives and there's less focus on quick ROI.

The problems with using RFID in retail go beyond cost, ROI, and interference issues, says Jamshed Dubash, a consultant who has worked extensively with the Department of Defense and other government agencies on RFID projects. Retailers and consumer goods companies use different technologies and processes for electronic data interchange. As a result, integration issues make it difficult for large retailers to exchange data with all their supply chain partners, Dubash says.

Retail contracts with suppliers tend to be short, based on the fleeting whims of consumer demand. Retailers have to squeeze the lowest prices out of their suppliers to make their margins, and that can make it difficult for all but the largest suppliers to invest in something like RFID.

Government agencies are different. They tend to work with fewer suppliers and their contracts last longer than the typical supplier contract with a retailer. They may require suppliers to use RFID as part of a contract and even require compatible systems. Because contracts are longer term, suppliers have more time to recoup their investments and, in some instances, can even incorporate the cost of the RFID implementation into the contract.

The military is increasingly using the technology--military organizations worldwide used 55 million RFID tags last year, according to IDTechEx. The Defense Department is looking for the same benefits from RFID as Wal-Mart, Dubash says. It's vastly more efficient to locate RFID-tagged airplane parts and equipment in the supply chain, and the technology lets the military easily deploy toiletries and other goods to overseas personnel from global distribution centers.

But military groups aren't the biggest public sector RFID consumers. By far, the biggest use of RFID is smart cards, a $3 billion market that consumed 559 million tags last year, or 28% of all tags sold. Most of these smart card projects are for passports, ID cards, and prepaid transportation cards. Last year, China completed a three-year, $6 billion project to implement RFID-chipped national ID cards--the largest RFID project to date.

The United States began adding RFID chips to passports in 2006. The United Kingdom will spend $570 million on RFID chipped-passports this year, and India will spend $40 million, according to IDTechEx. In transportation, London is projected to spend $1.7 billion on RFID-chipped smart cards for its bus and train systems; New York and New Jersey spent $500 million on RFID for a drive-through highway toll collection system last year, and Florida spent $60 million.

Governments also are driving the use of RFID for tagging livestock to help stem the spread of Mad Cow disease and other threats to local food supply chains. Ninety million tags were used on animals around the world last year, IDTechEx says. In Australia, which exports a lot of beef, RFID tagging is required by law. Cows' ears are tagged with RFID chips so that if a diseased cow turns up, it can be tracked back to the ranch it came from, and everywhere it had been.

Seeking a Competitive Edge vs. Chasing Savings in the Cloud Joao-Pierre S. Ruth, Senior Writer,  7/19/2021
White Papers
Identity Detection & Response (IDR) as a Solution for Identity-Based Attacks
A Pragmatic Path to SASE
2021 Cyberthreat Defense Report
Cyber-Resilience Is a Must Have in the Next Normal
The Top 5 Fails of DLP