Robot Stingray Moves To The Beat Of A Rat's Heart - InformationWeek

Harvard researchers have created an artificial ray that swims using genetically engineered cells derived from the hearts of rats.

In a paper published in the journal Science, Sung-Jin Park, research associate in bioengineering at Harvard's Wyss Institute, describes the creation of a biohybrid ray designed to move toward light.

The ray is constructed with a gold skeleton covered by a pliable polymer embedded with cardiomyocytes (cardiac muscle cells). These cells have been genetically engineered to respond to blue light by contracting or beating as a heart would.

With these cells embedded in its body, the ray will propel itself toward a light source. It does so well enough that it can traverse an obstacle course, as demonstrated by this video from the Disease Biophysics Group at Harvard.

The ray, a hybrid of animal and machine, is similar to the bioengineered android Roy Batty in Ridley Scott's 1982 film Blade Runner in that its live cells have a limited lifespan. But it lacks the means to demand more life from its creator or the size to push anything but itself around. The robot ray is only about as big as a penny. 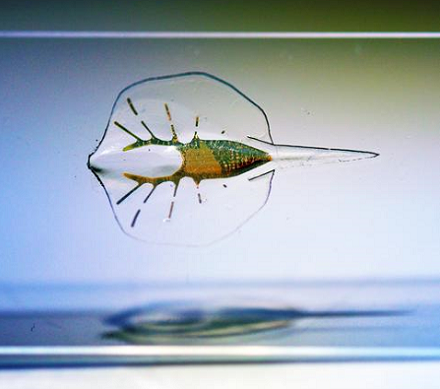 "Once we build the beast, it will last about a week with minimal lost in top speed," said Kevin Kit Parker, professor of bioengineering and applied physics at Harvard's Wyss Institute, in an email. "We beat them up quite a bit, so that lifespan could probably be extended. They swim around in a salt solution that we throw some sugar in, so they feed on that."

Engineering through biomimicry has surged in recent years, according to a 2011 paper in the Marine Technology Society Journal that suggests batoid fishes (i.e. manta rays, sting rays, and skates) as a source of inspiration for underwater robot design. Other examples of the trend include a flying robot created by NYU researchers that propels itself through the air as a jellyfish does in water, the Picobug robot from the University of Pennsylvania’s GRASP Laboratory, and Boston Dynamics' BigDog robot.

The paper describes the project as paving the way toward "the development of autonomous and adaptive artificial creatures" that respond to sensory input, and soft robots capable of complex behavior.

Parker said that while some of colleagues are focused on advancing soft tissue robotics, he's more interested in how the work might help improve human health, specifically by advancing artificial heart technology. The implication of engineering a reliable artificial heart using living cells could pave the way for an artificial heart that works more effectively than existing options inside a human body.

"Soft robotics is a tool, cardiac physiology the end," he said.

Thomas Claburn has been writing about business and technology since 1996, for publications such as New Architect, PC Computing, InformationWeek, Salon, Wired, and Ziff Davis Smart Business. Before that, he worked in film and television, having earned a not particularly useful ... View Full Bio
We welcome your comments on this topic on our social media channels, or [contact us directly] with questions about the site.
Comment  |
Email This  |
Print  |
RSS
More Insights
Webcasts
Data Center Network Operations (NetOps) Reimagined
Take DevOps to the Next Level
More Webcasts
White Papers
Annual Cybercrime Report
5 Reasons to Protect your VPN with Multi-Factor Authentication
More White Papers
Reports
We Need Your Input: Trends in Workforce Optimization
Enabling Enterprise Resiliency Through Cyberthreat Detection
More Reports