A costly Samsung device raises the question: How much is too much for a smartwatch?
10 Wearables To Watch At CES 2014
(Click image for larger view and slideshow.)

Update: Samsung announced on Friday that the official price for the Gear 2 is $299, not $295 as was reported Thursday.

Samsung officially introduced the Gear 2 and Gear Fit smartwatches at an event in Taiwan this week. The Gear Fit will set you back $197. Clearly, Samsung is confident in its new hardware. These prices are among the highest for such devices. There are two major shoes waiting to drop, however, which could reset the expectations of what wearables can do and what they should cost.

The original Samsung Galaxy Gear smartwatch hit the street last October with a price of $299. Some US wireless network operators offered it for less when bundled with a Galaxy Note 3 smartphone, but those packages still cost a minimum of $400. Its high price was one of the Galaxy Gear's biggest detractors -- it cost an average of $50 to $100 more than most competing devices, which made it a tough sell to many consumers.

Samsung executives admitted this year that they had probably priced the Galaxy Gear too high, and they vowed to sell its successor at a lower price point. Clearly, that didn't happen.

[Samsung is reportedly working on a cellular-enabled smartwatch. Would you buy one? Read Will Samsung Smartwatch Make Voice Calls?]

At $299, the Gear 2 costs more than the Pebble Steel ($249), the Sony SmartWatch 2 ($199), and the original Pebble ($149). Only the limited-edition Qualcomm Toq has a higher price point ($349). One can argue that the Gear 2 offers more functionality than either of the Pebble devices, which are limited to monochrome displays and lack cameras and heart rate monitors. The Sony SmartWatch 2 lacks a camera, too, but it has a full-color display and solid battery life. 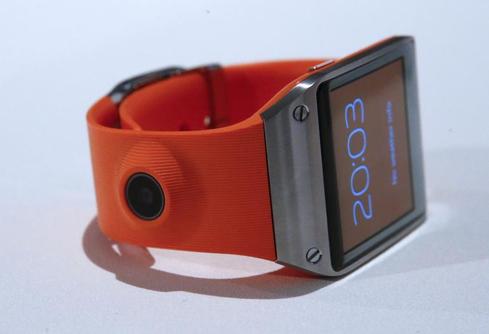 Looking at the Gear Fit, the $197 price point seems more reasonable. It has a smaller display than the Gear 2, lacks a camera, and has a more limited, proprietary operating system. However, it is important to classify the Gear Fit as a fitness band on steroids, rather than a slimmed-down smartwatch. Compared to other fitness bands, the Gear Fit is among the most expensive. The Jawbone Up 24, for example, costs $149, while the Jawbone Up and Fitbit Flex each cost $99. There are dozens of fitness bands that fall into the $50-$100 price range. However, none of these less-costly devices offer a curved, AMOLED touch display, and one could argue that the screen alone offsets the higher price tag of the Gear Fit.

Now, about those two shoes… First, Apple has yet to enter the wearables market. It's been rumored to be prepping a smartwatch for more than a year, but nothing has shown up yet. Whatever Apple comes up with in terms of features and price point has the potential to disrupt -- or at least unsettle -- the current market. This is a big TBD that should be on everyone's radar at least until the fall.

Then there's Google. Just this week, it announced Android Wear, a slimmed-down version of Android for wearable devices. The first Android Wear products will naturally be smartwatches, and Google has a number of hardware partners lined up to make Android-based smartwatches, including LG and Motorola. The LG G Watch and the Motorola Moto 360 will be the first two Google-backed smartwatches to arrive. Neither Motorola nor LG has provided pricing details, but Google offered a pretty good preview of what the watches will be able to do. If these devices are priced aggressively -- or even competitively -- against what's already in the market, they may just turn wrist-based wearables on their head.

I think people would pay around $200 or even $300 for a smartwatch, if they really want those features.
Reply  |  Post Message  |  Messages List  |  Start a Board
InformationWeek Is Getting an Upgrade!