In an Oct. 14 statement, Samsung estimated that the recall of its Galaxy Note smartphone will cost the company as much as $3 billion over the next several quarters. So far, Samsung has received 96 reports of overheating and fire associated with device.

The recall of Samsung's Galaxy Note 7 smartphone is likely to cost to the South Korean company about $3 billion over the next several months, according to a statement released Oct. 14.

"The company already allocated the expected direct cost from the discontinuation of Galaxy Note7 sales in its third quarter earnings guidance revision announced on Oct. 11, but expects the drop in revenue from the discontinued sales to continue to have a negative impact on operating profit for the next two quarters," according to the statement.

On Oct. 13, the Samsung, along with the US Consumer Product Safety Commission, issued an official recall of the Galaxy Note 7 smartphone that includes replacement units issued after the first recall of the device on Sept. 15. In Thursday's report, the CPSC notes that Samsung has received 96 reports of the device's lithium ion battery overheating.

This second recall involves 1.9 million Galaxy 7 devices, which includes the 1 million phones affected by the first recall in September.

The CPSC is asking Galaxy Note 7 owners to power down the smartphone and look into returning or exchanging the device.

Earlier this week, Samsung halted production of its flagship smartphone, urging partners and carriers to no longer sell the device to customers. A day later, the South Korean company took the unusual step of terminating the entire Galaxy Note 7 line completely, noting concerns about consumer safety. 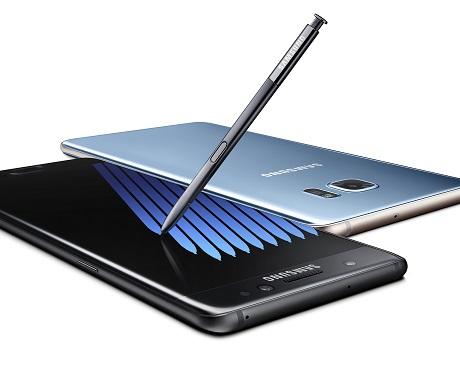 In a statement released Thursday, Samsung announced that it would offer customers a $100 credit to buy another company phone. There's also a $25 offer if users want to switch to a smartphone from another manufacturer.

"We appreciate the patience of our consumers, carrier and retail partners for carrying the burden during these challenging times," Tim Baxter, president and chief operating officer of Samsung Electronics America wrote in the statement. "We are committed to doing everything we can to make this right."

Ever since the release of the Galaxy Note 7, Samsung has been plagued with problems related to the device's lithium ion batteries. Only a few weeks after the first recall, more reports flooded in about the phones catching fire, including a replacement device brought onto an airplane.

The CPSC report found that of the 96 reports to Samsung, 23 happened after the initial Sept. 15 recall. The company has also received 13 reports of people being burned by the phone, as well as 47 incidents of property damage.

The faulty Galaxy Note 7 phones have dealt a major blow to Samsung's reputation over the last several weeks. While it's difficult to establish whether the recall will have a broader effect on the smartphone market, it's clear the company needs to rebuild its reputation, especially with Apple's iPhone 7 and iPhone 7 Plus on the market, and a number of other devices ready for release.

In an online poll of 1,000 Samsung users, Branding Brand found that 40% of customers would consider switching to another Android device or an iPhone. In fact, the poll found that's Google's recently announced Pixel smartphone might be an attractive alternative for those who still want an Android device.

However, not everyone is convinced that this recall is a fatal blow to Samsung. In an email earlier this week to InformationWeek, IDC analyst Jitesh Ubrani observed that consumers tend to forget these incidents in the long run.

"There have been issues with other products - - maybe not massive recalls -- like the antennagate incident with Apple, but consumers generally move past it and the companies don't tend to face major long term issues. I suspect it'll be the same with Samsung," Ubrani said.

Scott works with the editors and editorial directors of InformationWeek, Dark Reading, and Network Computing to help build audience engagement for all three publications. He also oversees editorial newsletters for InformationWeek and works as the day-to-day news editor for ... View Full Bio
We welcome your comments on this topic on our social media channels, or [contact us directly] with questions about the site.
Comment  |
Email This  |
Print  |
RSS
More Insights
Webcasts
Fintech at SaaS speed: Navigating the scale & security challenge
Bolstering Your Enterprise Cyber Risk Assessment
More Webcasts
White Papers
The State of Malware Threats
How DevOps Delivers on User Experience with Observability
More White Papers
Reports
Enabling Enterprise Resiliency Through Cyberthreat Detection
A Decade of Passive DNS
More Reports

@BillB031 I agree with on several issues here. I myself am in the market for a new phone later this year and I was considering the Note 7 as a replacement to my Galaxy S 5. That doesn't seem possible now, so not sure what direction I will go.

Now, with that said, you are also right about the odds of phone problems. We are talking about 100 phones out of 2 million or so that were shipped/bought. However, the fact that Samsung ended production and is willing to take the hit on it, signals to me that the company found more wrong with this than just bad publicity. Dell had to recall about 4 million PCs at one point, and the company did not remove the line.

I believe that there's some real fundamental flaws here and Samsung seems to have to come same conclusion.
Reply  |  Post Message  |  Messages List  |  Start a Board
InformationWeek Is Getting an Upgrade!