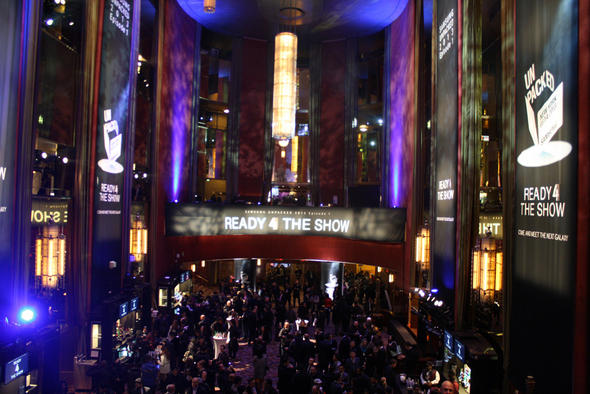 With the Galaxy SIII (or S 3) firmly established as one of the top-selling smartphones of recent years, Samsung clearly believed its successor, the long-heralded Galaxy S 4, deserved a major release event. It got one, all right: a lavish song-and-dance premiere at none other than New York City's Radio City Music Hall, with thousands in attendance.

When the curtain rose on the main stage to begin the release announcement, all that was missing was the Rockettes. Broadway actor Will Chase served as master of ceremonies to introduce JK Shin, president and head of the IT and mobile communication division of Samsung Electronics, and Ryan Biden, director of product marketing for Samsung Telecommunications America.

Via a series of cutesy on-stage skits, Chase and a troupe of actors -- including the remarkably talented tap-dancing kid who was featured in Samsung's "Unpacked" ad campaign -- took the audience through a rapid-fire tour of the S 4's new features.

The key point they stressed was that the feature set for the S 4 is designed to complement the behavior of our daily lives: gallery functions for picture-taking, live language translations for travelers, integration with Samsung's HomeSync devices for integration with TVs and media hubs.

The phone's processor varies -- it's either a Qualcomm Snapdragon S4 or Samsung Exynos 5 processor, with different models shipped to different territories. The phone will come with 2 GB of RAM and 16, 32 or 64 GB of internal flash storage, which is further complemented by a microSD card slot that can store up to an additional 64 GB.

Connectivity will include both 3G and 4G radios, with up to Hexa band support for 4G, Wi-Fi a/b/g/n/ac support, Bluetooth 4.0, and even an infrared LED to allow the phone to be used as a controller for home theater and TV devices with the appropriate software. The phone offers two polycarbonate shell designs: Black Mist or White Frost.

The 13-megapixel rear-facing camera and 2-megapixel front-facing camera can work together in both Samsung's photo and video chat applications -- for instance, to allow you (using the front camera) and other friends (using the rear camera) to chat with a remote third party using a picture-in-picture view.

The S4 is set to premiere in some 155 countries at the end of April. Pricing has not yet been announced. Dig into our slideshow to look at some key features and decide if this might be the smartphone for you.