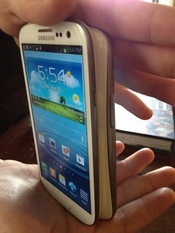 Samsung Galaxy S III
You're going to want this phone.

Samsung now considers the Galaxy S III its flagship phone, and rightfully so. I've been testing the smartphone during the past few days, and it is one of the most impressive smartphones I've ever used. It's just the right size and then some, and the hardware is tip-top. Samsung packs in more features--many around sharing content--than ever before. The phone runs Google's latest version of Android--version 4.0, or Ice Cream Sandwich, along with Samsung's own TouchWhiz user interface.

The Galaxy S III and HTC's One will do furious battle in the coming months, giving Android even more momentum ahead of whatever Apple has up its sleeves.

Samsung expects the Galaxy S III to be a huge seller, and the carriers--AT&T, Verizon, Sprint, T-Mobile and U.S. Cellular--have all been taking pre-orders, but Samsung is not sharing those figures just yet. Only Sprint and T-Mobile have announced availability: June 21. Pricing varies by carrier, but generally the 16-GB version runs $199 (with data plan) and you'll pay about $250 for the 32-GB version. Samsung officials said there will be only one version of the Galaxy S III, rather than a variety of models made specifically for each carrier.

I kept looking at the Galaxy S III alongside the puny iPhone 4S and laughing; as much as I like the iPhone, it's suddenly too small. Thing is, despite its size, the Galaxy S III is really light (133 grams, or 4.7 oz), and super thin at 8.6 mm, with rounded, beveled edges, a tapered back, and solid Gorilla glass display. It's extremely comfortable to hold and there's really no wasted space. (The Samsung Galaxy S III, for those keeping score, or counting pixels, packs in 306 pixels per inch; the Apple iPhone 4S Retina display has 326.)

The Galaxy S III is powered by Qualcomm's dual core 1.5-GHz Snapdragon S4 processor (the international version has Samsung's own quad-core processor (Exynos), but that doesn't support LTE 4G networks in the United States. Samsung said that in its own benchmarking the difference between its dual-core and quad-core phones is practically negligible, and points out that the Qualcomm S4 chip uses the Krait architecture, which is more advanced; Samsung's Exynos has more cores, Samsung added, but they are based on an older ARM Cortex-A9 design.

The same holds true for HTC's One, by the way (the international version of the HTC One X uses Nvidia's Tegra 3, a quad-core processor that doesn't yet support LTE 4G networks).

The Galaxy S III has an 8-megapixel rear-facing HD camera and a 1.9-MP front-facing camera. (And Samsung's typical physical home button, which I happen to find handy.)

In addition to running on HSPA+ and LTE networks, the phone packs in Wi-Fi, GPS, Bluetooth 4.0, and NFC. Its 11-pin MHL port supports HDMI and microUSB, and its microSD slot can take up to 64-GB cards. The S III has a 2100 mAh battery (removable), and the company claims seven hours of constant use--in my limited experience, that's just about right.

I personally have the Samsung Galaxy SII and have been waiting for the release of the SIII to check out all of the new features it has over the SII. I am very impressed with my current phone and expect that the SIII will be a huge hit, considering it is supported by all major mobile providers, and the aggressively growing demand in the mobile market for phones as compatible as laptops. With Samsung putting the Snapdragon S4 processor into the new SIII, it essentially has laptop capabilities.
I have also heard that the screen is also larger on the SIII; I was and am currently very pleased with the SII screen size. With the SIII I can finally have all of my mobile devices in one; camera, music player, phone, and internet services. That partnered with all the social media and the ability to create and group casts and content sharing in real time are huge features. Thanks for pointing out the applications that you think are most notable, defiantly will check them out. Is there any other must have applications for the new SIII that the author did not mention?
Paul Sprague
InformationWeek Contributor
Reply  |  Post Message  |  Messages List  |  Start a Board
Editors' Choice
Hot Topics

10 IT Trends to Watch for in 2021 Cynthia Harvey, Freelance Journalist, InformationWeek,  12/22/2020
White Papers
The Network for Whatever's Next; A CxO Guide
A Practical Guide to SASE Migration
Zero Trust Evaluation Guide
From MFA to Zero Trust
The 2020 Duo Security Trusted Access Report

More Informa Tech Live Events
Securing and Monitoring Networks in the 'New Normal'The Failures of Static DLP and How to Protect Against Tomorrow's Email BreachesBuilding the SOC of the Future: Next-Generation Security Operations