Samsung's new Galaxy 5S flagship smartphone has a fingerprint sensor, improved camera, and Download Booster, but it is evolutionary -- not revolutionary.

Samsung executives say the Galaxy S5 is all about getting back to basics. The world's largest supplier of mobile phones took the stage in Barcelona this week and talked about delivering the features consumers really care about. Like the subdued event itself, however, the Galaxy S5 is short on pizazz.

The Galaxy S5 is more or less everything it was expected to be: a more powerful smartphone for average users who are less interested in gimmicky features than they are in something that is easy to use. Samsung toned down the wow factor in its new smartphone, which -- while impressive in its own right -- doesn't blaze any new trials.

The GS5 adopts the classy design language from the larger Galaxy Note 3. It has a finely textured back surface, an audacious chrome band, and a lot of glass. It is a conservative phone that doesn't look all that much different from the Galaxy S4 or the Galaxy S III. Samsung carried over the water resistance feature from the GS4 Active, which means the GS5 can be splashed and even submerged in liquid briefly. This should help reduce the number of phones that need replacing due to an unplanned bath.

The Super AMOLED screen measures 5.1 inches and sticks to 1080p HD resolution. The device is powered by a 2.5 GHz quad-core Snapdragon 800 processor from Qualcomm, which is matched with 2 GB of RAM and either 16 or 32 GB of storage. The device is among the first to support microSD cards up to 128 GB. (Coincidentally, SanDisk announced the world's first 128 GB microSD card during Mobile World Congress. It costs $200.)

[And where will all the bandwidth come from? Read Artemis Networks Calls For Wireless Revolution.]

Samsung stuffed nearly every type of radio into the GS5, including Category 4 LTE, dual-band 802.11ac WiFi, Bluetooth 4.0 Low Energy, NFC, GPS, and GLONASS. Samsung claims the GS5 supports more LTE networks around the world than any other phone. The GS5 offers one neat networking trick called Download Booster. It can use the LTE and WiFi radios simultaneously to download files in the blink of an eye.

Imaging is one of the core features re-tooled by Samsung. The camera sensor has been improved to 16 megapixels and is capable of capturing 4K (Ultra HD) video. Samsung pared down the number of shooting modes in the camera software, though, and simplified the user interface. The camera has its own companion chip, and the auto-focus can dial in details in 0.3 seconds. Samsung also added a feature called Selective Focus, which can be used to alter the depth of field (read: blur the background or foreground) after the picture has been taken. 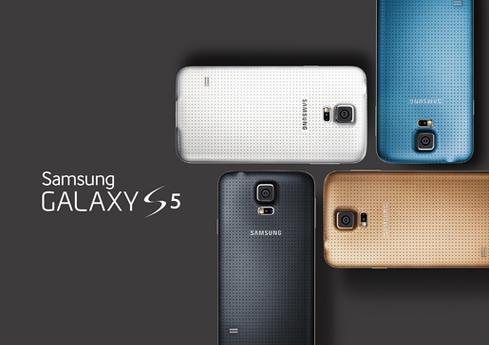 Samsung borrowed a page from Apple and added a fingerprint sensor to the GS5. The sensor is built into the home button, just like that of the iPhone 5s. Samsung bills the sensor as an added layer of protection and security for business users. The sensor can be used to make swipe-and-pay purchases with Paypal, and can even be used to lock select files or folders on the device that the owner wants kept private.

The Galaxy S5 is certainly superior to its four predecessors, but not by all that much. It signals a disconcerting stage of smartphone development: Hardware innovation is beginning to plateau. Apple barely changed the iPhone 5s when compared to the iPhone 5. LG's G Pro 2 is an iterative update to the G Pro. Nokia's Lumia devices are all slight variations on a theme. No hardware maker has delivered a truly stunning, eye-popping piece of technology for perhaps the last 12 months -- if not longer. Hardware innovation isn't everything. There's only so much that can be stuffed into a 6x3-inch slab. That's why Samsung and others are turning to developers to help differentiate their products. Even in that respect, though, the Galaxy S5 does little to impress. While the new features are indeed attractive and will surely please owners, we've seen it all before.

The Galaxy S5 will hit US wireless network operators in April. Pricing of the device was not announced.

You found it! :D When Qualcomm presented some of its AR and biomedical applications in that conference in Helsinki there were AR butterflies all over the stage. :) It was very nice. This was, I think, in 2009, or 2010.

@ Susan
Yes, the world you're describing seems plausible and hopefully not far in the future.
I found the Qualcomm augmented reality you mentioned. They call it Vuforia. Here is a link to its YouTube channel: http://www.youtube.com/user/vuforia. Pretty awesome videos.

It depends on what kind of expectation you set. If you expect something really amazing and fancy, S5 may not be the one. But for a smartphone, S5 should be able to play its role pretty well. Internet of Things is future trend and the smartphone may become a handy control device but there is still sometime for that.
Reply  |  Post Message  |  Messages List  |  Start a Board

Yes, the Internet of Things is going to make almost everything possible.

The shower thing can be done with a sensor that you activate through your phone. Your coffee maker can be programmed to make your coffee at a certain time. An AI then brings the coffee to your bed and wakes you up.

The AI reads the news that you are interested in, and ignores the topics that not interest you. When you are ready to go to the shower you start it from your phone, so the bathroom is all nice and steamy when you get there. :D

"I was thinking more of a real AI on the phone and holographic images of the person we're talking to or even maps. Well, that would be neat and handy, wouldn't be?"

Yes. You can already have Augmented Reality and holographic images on the phone. I saw this some years ago in a conference. Then I saw a commercial. It was being used for marketing. I think it was an app from Qualcomm.

Maybe some people expect their phone to wake them up with a ready cup of coffee, read the news, and get the shower ready while they finish their coffee.
To be honest, with the Internet Of Things around the corner, those things don't seem far-fetched to me.
I don't know how they're gonna implement the shower thing, but as revolutionary, I was thinking more of a real AI on the phone and holographic images of the person we're talking to or even maps. Well, that would be neat and handy, wouldn't be?

Reinventing the battery is one possibility. What ever happened with Nokia's battery innovation? There is a startup in the UK working on a solar battery.

Tango is an exciting frontier, someday rather than having to pick up a souvenir while on vacation, one could just scan the object using their phone to create a 3D template which could be later printed using a 3D printer.
Reply  |  Post Message  |  Messages List  |  Start a Board

Susan, yes I agree that the phone has already become massively powerful and the Cloud has given it even more capability to perform tasks, with the bar already set so high there is not much that can be done unless someone comes along and reinvents the battery -- device usage time of 100+ hours. But if an S5 is on its way then it should be an S5, not an S4 relabeled with minor touchups.
Reply  |  Post Message  |  Messages List  |  Start a Board

Galaxy S5's sensor is housed in the home button s you have explained and can use to unlock the device. It also has given the capability to make secure payments via PayPal and other mobile wallets.
Reply  |  Post Message  |  Messages List  |  Start a Board

A recent article showed that many of the Sony phones have incorporated this feature to their phones. At the same time they say it is a unique feature as far as flagship phones are concerned.
Reply  |  Post Message  |  Messages List  |  Start a Board
Page 1 / 3   >   >>
Editors' Choice
Hot Topics