We took our review model for a whirl at the California Academy of Sciences in San Francisco's Golden Gate Park. It's a great mobile phone, weighed down by unwanted apps. 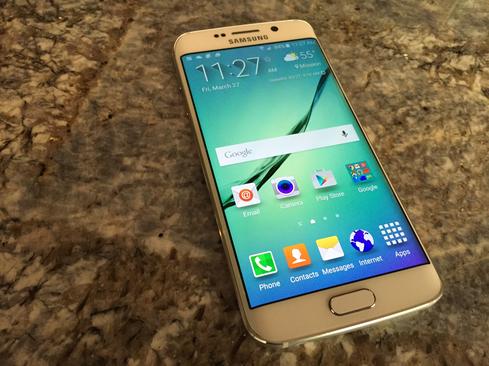 Samsung's Galaxy S6 Edge is a lovely, powerful smartphone. Sweetened with Android 5.0 Lollipop, it's a pleasure to use.

Samsung sent me a review model and I took the device with me for a test drive to the California Academy of Sciences in San Francisco's Golden Gate Park on March 26 to try out the camera, one of the major selling points for the S6 line.

After I return my reviewer's version of the Galaxy S6 Edge, I may just buy one for Android mobile app development, once it becomes available in the US on April 10. (For more about the technical specifications, see Eric Zeman's review.)

If I do end up buying an S6 Edge, I doubt that I'll employ it as my primary phone, however. I've been using an Apple iPhone 6 for the past few months and have been happy with it. The Galaxy S6 Edge is certainly comparable to the iPhone 6, but I don't see a compelling reason to switch.

I've only had a day to play around with it, so what follows is my initial impression. I consider myself a user of both iOS and Android, for those who accept such heresy.

The Galaxy S6 Edge is beautifully crafted and comes in a variety of colors. Its curved screen makes it appear as if it offers more physical screen space than the iPhone 6. But in practice, only the flat portion of the screen is usable for touch interaction, making the input area essentially the same. Still, the curve creates a pleasant sense of depth.

Aesthetics have to be accompanied by usability and there I find the Galaxy S6 Edge falls short. These are minor quibbles, because only small differences set the S6 Edge and the iPhone 6 apart.

I found the swipe required to access the camera from the lock screen to be easier on the iPhone 6 than on the S6 Edge. On the iPhone, your thumb doesn't have to travel very far to access the camera; on the S6 Edge, your thumb has to travel further, requiring more deliberate effort to traverse the required swipe distance. It's not exactly a hardship, but UI refinements are measured in millimeters.

Also, the amount of time it takes the screen to return to sleep mode after pressing the Home button – 6 seconds for the S6 compared to 9 seconds for the iPhone 6 – is just a bit too short. I often found the S6 dropping back into sleep mode before I had the opportunity to interact.

My biggest complaint is that there's too much software on the S6 that I didn't ask for. When I swipe left from the home screen, there's an ad for T-Mobile TV and the ABC show Once Upon A Time. Not wanted. Swipe left again and there's Flipboard. The Facebook app, Facebook Messenger, Instagram, and WhatsApp have all been pre-loaded, as have Microsoft OneDrive, OneNote, and Skype. Lookout's security app also comes pre-installed. After tapping on one of its notifications, I was presented with a screen to sign up for the company's paid subscription service.

If I want your software, I'll download it. I'm willing to accept Google's default apps because of its role in Android, and Samsung's apps because Samsung made the phone. Apps from other companies shouldn't be there.

Aside from my visceral dislike of uninvited marketing, I enjoyed my time with the S6 Edge.

On the following pages, you'll see unboxing photos taken with my iPhone 6. The remainder were taken with the S6 Edge. Though I did include one scene taken by both devices, this isn't meant to be a photographic quality comparison – these images were not taken under controlled conditions or with consistent settings. And they've been resized by our content management system, which alters image quality.

That said, I present to you Samsung's Galaxy S6 Edge and a night at the museum.

Comment  |
Email This  |
Print  |
RSS
More Insights
Webcasts
People Are The Most Important Part of Autonomous SOC
Nip Ransomware in the FUD: Detecting Attacks Pre-Encryption
More Webcasts
White Papers
Why Add Security to Your Skill Set and How to Do It
MontanaPBS Shifts to Agile Broadcasting with Help from Raritan KVM Solutions
More White Papers
Reports
The Infoblox Q4 2020 Cyberthreat Intelligence Report
Special Report: Edge Computing: An IT Platform for the New Enterprise
More Reports

I'm not impressed with either the i6 or the S6. Is there anything comparable that might still have a removable battery or sd card slot, and wouldn't cost a month's salary?
Reply  |  Post Message  |  Messages List  |  Start a Board

Sorry there are none unless you are interest in a WinPhone.  The best Android smartphone on the market with replaceable battery and SD card is the Note 4 except you'll need that check book.  Motorola may also have some choices in their older models with prices that won't break the bank but their specs fall short.
Reply  |  Post Message  |  Messages List  |  Start a Board

I've got a Note 4 which shares many functions and features with the S6.  The swipe for camera on the lock screen is exactly one inch.  Holding the phone in my right hand its a piece of cake to use my right thumb to open the camera function.

No getting away from bloat ware.  Apparently the author is okay with the bloat on Apple iPhones as he accepts them because they are from Apple?

Setting up my wife's iPhone 6, I dropped it on first touch taking it out of the box.  Luckily it was on a thick carpeted floor.  It's very slippery when dry.

I'm not happy with mini-USB connector for chargers but its not Android's or Samsung's fault.  I'd rather have a standard connector than a proprietary one every day of the week.

Low light pictures are a challenge for most smartphone except the Sony Z4 or HTC M9.

Personally I love both phones.  The iPhone 6's UI is easier to learn and use for my wife.  However once the Android UI is learned,  I prefer it.

Note 4 huh?  I have been considering upgrading my Note 2 - how does the Note 4 compare size-wise?
Reply  |  Post Message  |  Messages List  |  Start a Board

@progman200, When the note 2 came out I said "who'd want such a huge phone".  I predicted it to fail in the market as it being to cumbersome for a phone.  Well was I wrong or what?  What changed me?  I started watching lots of stuff on my phone (a Nexus) since I had no tablet as I started using the Xfinity TV Go and other mobile video apps.  With the Note 4 you kind of don't need a tablet and its easier to carry than a tablet.  Add to this my aging eye sight where I now require reading glasses. Be prepared to be overwhelmed with size though.  The Nexus 6 is even bigger.  Both are on the border line of being that "too cumbersome" for phone usage.
Reply  |  Post Message  |  Messages List  |  Start a Board

@progman200, When the note 2 came out I said "who'd want such a huge phone".  I predicted it to fail in the market as it being to cumbersome for a phone.  Well was I wrong or what?  What changed me?  I started watching lots of stuff on my phone (a Nexus) since I had no tablet as I started using the Xfinity TV Go and other mobile video apps.  With the Note 4 you kind of don't need a tablet and its easier to carry than a tablet.  Add to this my aging eye sight where I now require reading glasses. Be prepared to be overwhelmed with size though.  The Nexus 6 is even bigger.  Both are on the border line of being that "too cumbersome" for phone usage.
Reply  |  Post Message  |  Messages List  |  Start a Board

The iPhone comes loaded with bloatware as well. And to call it an "adult phone" is condescending and incorrect. An adult would figure out that unwanted apps can be hidden and unused on Android. Whilst on iOS you have to put them in a folder. Both phones are top class and pretty much equal in all aspects. It is a matter of personal preference. If you are that unhappy you should get the iPhone immediately and not be concerned about the difference between 6 and 7 because you will not appreciate them.
Reply  |  Post Message  |  Messages List  |  Start a Board

Well said. Android is just as good an operating system. The new Galaxy looks good and i guess we are coming to the time where there will be no replaceable batteries and expansion slots for cards. Maybe that improves performance and battery life but for my money you cannot go wrong with a Galaxy. Apple is a good phone but better hype.
Reply  |  Post Message  |  Messages List  |  Start a Board

@progman2000: as suggested by DDURBIN1 that first you have to be comfortable with the size of the phone. In your case as you have been using Note 2 for quite some time it seems that you have adjusted yourself with the dimensions. Note 4 is negligibly large so I don't think this will much be a problem for you.
Reply  |  Post Message  |  Messages List  |  Start a Board

@tjgkg: I am not sure if irreplaceable batteries or memory extension is really the future of the smartphones or at least for now. At one side companies are making these batteries etc. irreplaceable and on the other side Google has launched project ERA to make a customizable phone. If they become successful with their idea, I think we will be able to replace not only batteries or memory but everything in a smartphone.
Reply  |  Post Message  |  Messages List  |  Start a Board
<<   <   Page 2 / 3   >   >>
Editors' Choice
Hot Topics

11 Ways DevOps Is Evolving Lisa Morgan, Freelance Writer,  2/18/2021
White Papers
Why Add Security to Your Skill Set and How to Do It
Intelligent Outcomes Are Key to Business Resilience
Enabling Enterprise Resiliency Through Cyberthreat Detection
The Hidden Security Risks of APIs: How to Protect Your Brand, Business, and Data
New Cybersecurity Paradigm