The latest flagship smartphone from Samsung gets its big reveal on the eve of Mobile World Congress 2015. Let us count the ways that it shines. 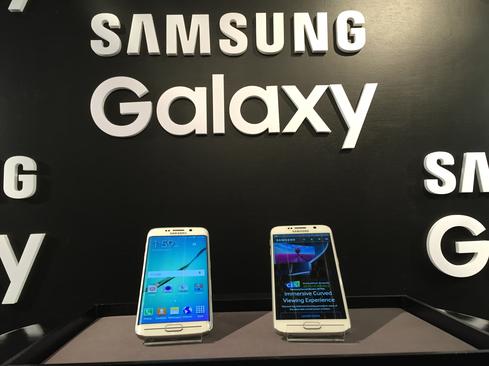 Samsung has unveiled its new flagship smartphone, the Galaxy S6, and a variant with a tapered screen, the Galaxy S6 Edge, just in time for Mobile World Congress (MWC) 2015 in Barcelona, Spain, March 2-5. The devices offer advances in wireless charging capabilities, faster memory, and support for KNOX, Samsung's Android security platform, all of which may appeal to business users. That's assuming, of course, that your company permits Android smartphones in the workplace.

The Galaxy S6 and S6 Edge smartphones are expected to receive strong wireless carrier support in the US, which will help offset their reportedly hefty price range.

InformationWeek, along with other members of the media, got a sneak peek at the smartphones during an event held in mid-February, at which Drew Blackard, director of product marketing for Samsung Electronics America, referred to the two devices as co-flagships. He said that Samsung expects to sell more premium devices in the US than ever before thanks to carrier installment plans. "As opposed to going into a store and paying $200 or $300 out of pocket, consumers are paying about $30 a month."

Undoubtedly this will help drive sales of a phone that would be quite expensive without some form of subsidy. Samsung representatives at the event said the company wasn't providing a recommended list price and left pricing to mobile carriers.

According to Ars Technica, the Galaxy S6 will cost European carriers the currency equivalent of $849, $963, and $1,076 for the 32GB, 64GB, and 128GB models respectively, with the curved S6 Edge costing $100 more for each variant. US pricing may be similar but won't be exactly the same.

In the Galaxy S6 and S6 Edge, Samsung has focused on "purposeful design," camera advancements, power management, and "meaningful innovation."

"That's another way of saying that we don't want to just provide technology for technology's sake, we want it to serve some consumer benefit," said Blackard.

"One of the challenges of being a mobile phone designer these days is each year our devices are getting thinner," said Samsung senior designer Hong Yeo. "One of the problems that we face is that if you approach it with the traditional industrial design approach, the device inevitably becomes very cold and industrial. This is a device that you use every day. It's probably the most touched device. So what we wanted to do is give warmth, character, richness, and depth."

The S6 Edge in particular exhibits that warmth, thankfully not in the thermal sense, though that could probably be achieved by overtaxing the battery. The right and left sides of the S6 Edge screen are curved, and that creates the illusion of screen depth. The effect is vaguely similar to the parallax effect in Apple's iOS 8, but it's more subtle and evident from a distance rather than up close.

Both S6 models include a 16 MP rear-facing ƒ/1.9 camera and a 5 MP front-facing ƒ/1.9 camera, which represents an improvement over the ƒ/2.2 and ƒ/2.4 rear- and front-facing cameras in the Galaxy S5. The cameras feature auto real-time HDR, IR white balance detection, and sensors with larger pixels for better low-light photography. They also provide object image stabilization, found in Samsung's Note 4, and object-tracking auto-focus, which helps maintain focus on a subject that's moving.

Samsung has improved the camera's launch time, so that it can be launched in just 0.7 seconds by double-clicking the home button from any screen.

"We think this is really a game-changer for us," said Blackard. That's because wireless charging is now fast enough to make it useful – a 20% charge takes about 30 minutes – and because places like Starbucks already have over 200 locations in the Bay Area that support wireless charging.

The S6 and S6 Edge feature a 5.1" 577ppi Quad HD Super AMOLED display that's 20% brighter than the S5. They're based on a 14mn Samsung-designed 64-bit processor that's 30% more power efficient than its predecessor.

Blackard said that the S6 relies on new LPDDR4 memory, which has faster read-write access. "For a business user, that plus the 64-bit platform with Google's Android 5.0 Lollipop means for high-memory tasks, like video editing, or presentations, it's going to be super-fast," he said.

The S6 and S6 Edge also boast improved sound quality with enhanced audio that's 1.5x louder than the S5, loud enough to make an external speaker unnecessary in many cases.

Check out our exclusive images of the device, and its features, on the following pages. Then tell us what you love (or hate) about the new Samsung S6 in the comments section below.

Why worry about a waterproof case...put the phone in a silicone protector case or sleve and it should be impervious to water on your hands or a damp countertop.  I never have had issues with water on any phone not dropped in the toilet or the pool.
Reply  |  Post Message  |  Messages List  |  Start a Board

Thanks for the fast reply.   I'm guessing a 32, 64, 128GB tier structure.  Have you heard anything on the battery charge life and recharging time? Also, if it's one-battery-fits-all or a high capacity battery, esepcially for high power ops on the 128GB model to be installed.  Bricking one of these will not be cheap.  With the structure now in line with Apple, I believe there will be a slow, albeit steady migration away from Samsung.
Reply  |  Post Message  |  Messages List  |  Start a Board

Hopefully they will come to their senses after this screwup.

There is no MicroSD slot on the S6, nor removable battery. This is a first for Samsung. You can buy the phone with three different memory configurations up to 128 GB
Reply  |  Post Message  |  Messages List  |  Start a Board

Fast charging and a big battery are some things that many people will appreciate.

No doubt. Will they also appreciate the non removable battery?

How about no more micro sd card slot and no more waterproofing? I don't believe Samsung users willing to upgrade are gonna be very happy.
Reply  |  Post Message  |  Messages List  |  Start a Board

The exciting part for me with this phone is its compatibility with the Gear VR headset. This could very well be the smartphone that starts to really get virtual reality into the hands of the masses, as so many of them will be able to try one out using their own phone. From there it's only a couple of hundred dollars and they have real, virtual reality wherever they want to take it.

Granted I think it's going to be years before it catches on to the extent that it snowballs into a global phenomenon, but smartphones are going to drive that forward far more than desktop PCs I think, even if the latter experience is likely to always be more impressive.
Reply  |  Post Message  |  Messages List  |  Start a Board

The inability of integrating data operations from the device to the microSD card was disturbing on the S5. Has Samsung reversed it ridiculous policy for the S6? If not, its going to be a deal-killer for many. Samsung should read their community threads.
Reply  |  Post Message  |  Messages List  |  Start a Board

The f1.9 is impressive, and better battery life and quick charging would be great, if money were no object. The design doesn't look good enough to be worth even more money, but maybe it's different in person.
Reply  |  Post Message  |  Messages List  |  Start a Board

Has anyone heard if Samsung will continue the water proofing on their phones? I have the S4 and having to be careful to keep it away from water can be annoying. Oops my hands are wet, can't anwser the phone right now... Listening to music in the bathroom and want a different song, better dry my hands first...
Reply  |  Post Message  |  Messages List  |  Start a Board

I am not very inclined to buy one for myself. But I do feel the battery life and fast charging feature attractive - this is the pain point for modern smartphones.
Reply  |  Post Message  |  Messages List  |  Start a Board
Page 1 / 2   >   >>
Editors' Choice
Hot Topics

10 IT Trends to Watch for in 2021 Cynthia Harvey, Freelance Journalist, InformationWeek,  12/22/2020
White Papers
The Network for Whatever's Next; A CxO Guide
A Practical Guide to SASE Migration
Top Threats to Cloud Computing: The Egregious 11
Two-Factor Evaluation Guide
From MFA to Zero Trust