South Korean titans Samsung and LG both fielded new flagship smartphones in Barcelona -- the Galaxy S7 and the G5. Which is the better pick? We compare the specs and put the two handsets head-to-head.

BARCELONA -- Samsung and LG used Mobile World Congress to introduce their 2016 flagship handsets, the Galaxy S7 and G5, respectively. The smartphones are similar in many ways, but have significant differences, too. Here are the features the phones share, as well as those that set the two smartphones apart.

The Galaxy S7 has a 5.1-inch quad HD screen and the G5 has a 5.3-inch quad HD screen. Samsung uses AMOLED display technology, while LG use LCD tech. The screens are generous in terms of size and resolution and both impress in their own way. Samsung's has better viewing angles, however LG's is brighter and delivers more accurate color. They're both quite impressive.

Each of the two smartphones relies on Qualcomm's Snapdragon 820 processor paired with 4GB of RAM. Neither company talked clock speeds, but in the few moments we spent with these handsets we can say with confidence they are incredibly quick. The performance was most noticeable within the camera applications.

Samsung's Galaxy S7 is crafted from aluminum and glass. The design, materials, and quality are top notch. LG, too, picked aluminum for the G5's chassis, but its metal skin wraps all the way around. The polish and fit-and-finish Samsung and LG put into these handsets are best-in-class. These are fine, fine phones.

Both phones will ship with Android 6.0 Marshmallow on board. Importantly, both companies played down their own software, apps, and services. Samsung and LG are known to install overbearing user interface skins on their phones, but that changes somewhat this year. People who buy the GS7 or G5 will notice less bloat -- and that's a good thing. 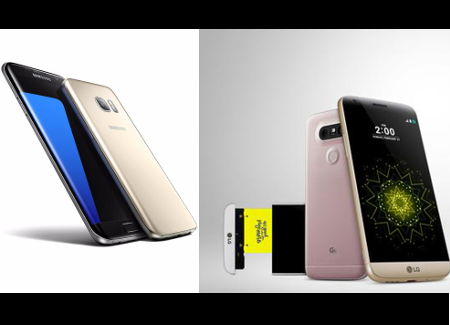 Samsung dialed back the pixel count of the Galaxy S7 from 16 million to 12 million. At the same time, it made the individual pixels larger. Samsung says the bigger pixels, combined with the f/1.7 aperture, can collect 95% more light than the pixels of last year's GS6. Samsung also moved away from phase-detection autofocus for a new technology at the pixel level. It claims the camera is faster than ever.

Samsung gave in and brought back the memory card slot that was so conspicuously absent from the Galaxy S6. This addition came at a cost, however; the GS7 is thicker than the GS6. Samsung did not bring back the removable battery.

LG's G5 has both a swappable memory card and a removable battery. In fact, the G5's core feature is the hatch along the bottom that allows the battery to be removed. The hatch supports accessories, such as a camera grip and stereo DAC. LG says more accessories are on the way.

Samsung impressed by adding water protection to the Galaxy S7. It carries an IP68 rating against liquid damage without unsightly ports and hatches. This means the GS7 can handle a short swim if you're careless at this summer's pool parties. The G5 has no such protection. I dunk in the pool will surely usher the G5 into Davy Jones' Locker.

Sum of All Odds

Is one of these handsets better than the other? That depends on your priorities. If you need a waterproof phone, then the GS7 is your only option. If you want expandable storage and changeable batteries, the G5 is your only option. Both phones promise quick performance, impressive imagery, and a high-quality experience. The G5 will be slightly cheaper, but the GS7 goes on sale first.