The new scaled-down younger brother to the best-selling Galaxy Tab 10.1, the Galaxy Tab 8.9, comes on like an iPad-challenger just like its older sibling. It's also been built with a certain eye toward business applications and being manageable in the workplace. 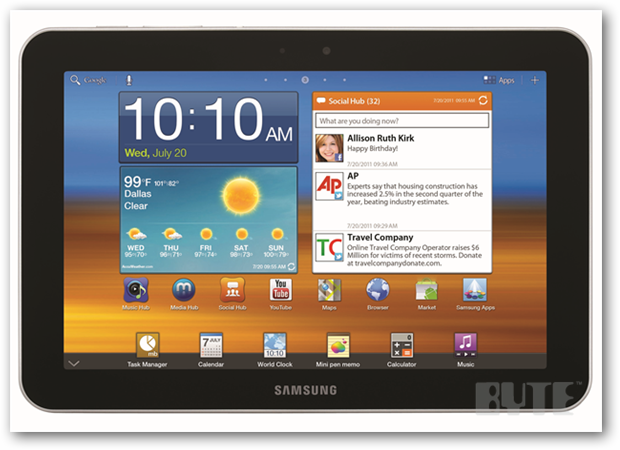 Weighing just one pound and measuring 9.1 inches long by 6.2 wide by 0.34 inches thick, with an 8.9-inch WXGA (1280 pixels by 800 pixels) screen, this Android 3.0 Honeycomb-powered tablet offers a good compromise between portability and comfortable viewing. It's tidy: the only physical buttons on the unit are the power switch and the volume rocker, with all other controls are on-screen. My model came with Wi-Fi only (plus Bluetooth and GPS).  An LTE-equipped edition is to be released at a later date. 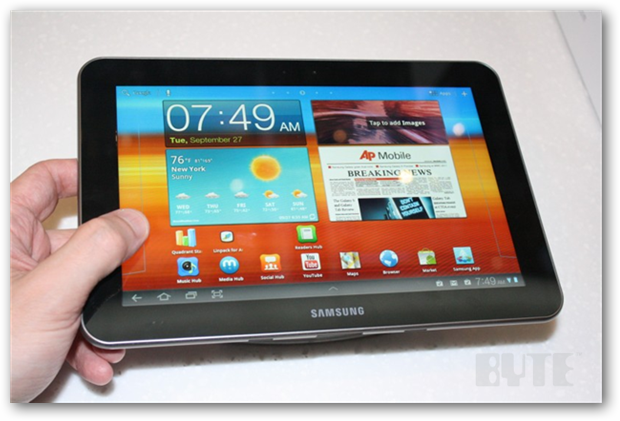 Flash is included--a major plus--which means all websites that need Flash work fine in the supplied browser. That said, Flash apps and video playback hesitated. Netflix in particular lagged a great deal. People looking for a razzle-dazzle multimedia machine will want to keep looking, unless Samsung offers a software update (none was available at press time) that addresses these issues. This doesn't feel like a 1GHz dual-core processor system with 1GB of RAM.

Samsung's biggest mistake with the device's design was to eschew a conventional USB connector for a proprietary one (the wide slit at bottom center in the above photo). You have to use Samsung's own proprietary cable to charge the tablet, or to connect it to a PC. (Even worse the device doesn't charge when connected to a PC. You can only charge it with the supplied AC adapter.) There isn't even an integrated SD card slot. The only way to read a media card is via a separately-sold reader that attaches to the charger/USB-connector port. (When plugged into a Windows PC, the tablet mounts as a media player, although it won't display its contents if it's locked with a password or PIN.) 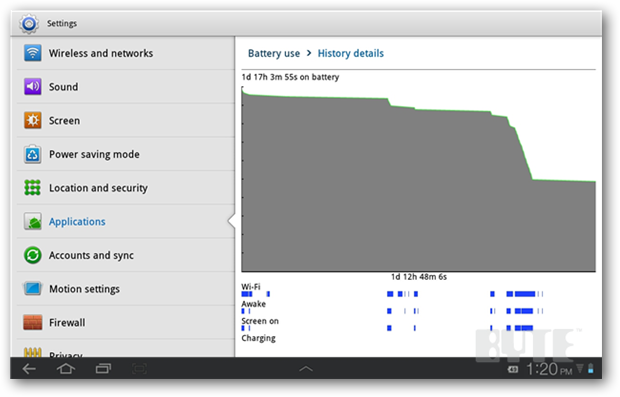 The steep drop in battery life shown in the diagram is courtesy of Netflix.


With most Android devices that I've worked with, the single biggest battery drain is the display, and the Tab 8.9 is no exception there. But I was impressed overall with battery life, which held up quite well during regular use. Watching a Netflix movie drained the battery the fastest, but conventional browsing and tasks such as using email or Google Maps had little impact. 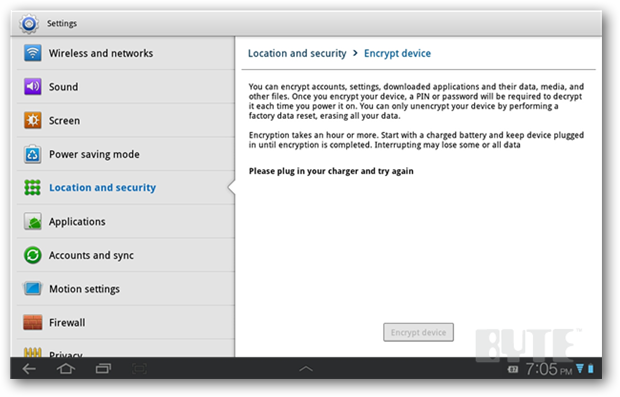 The on-device encryption option for the Tab 8.9 isn't enabled out of the box. You have to set it up yourself, including choosing an unlock password. Fortunately, encryption took only a few minutes (although there was very little on the device at the time), and decrypting the system was just as fast. Using encryption on the device didn't result in any noticeable performance hit or battery drain, either. 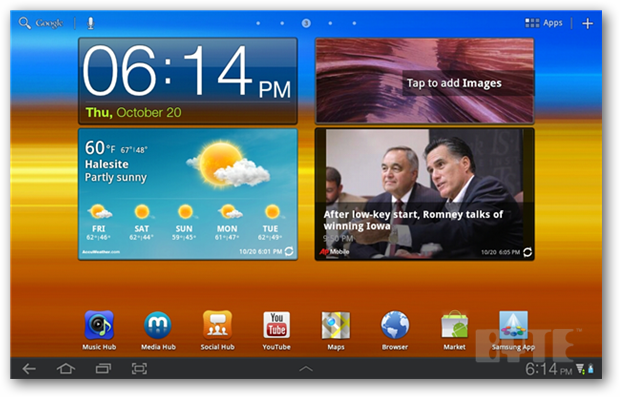 Samsung's custom TouchWiz launcher doesn't take too much getting used to if you're already a 'Droid user.

Samsung implements its own custom launch interface called TouchWiz to keep everything organized. Most of the interface customization can be seen in a group of icons at the bottom left of the screen: a handy universal back button, homepage shortcut, a list of running apps, and a shortcut to a screenshot utility. Tapping the arrow at the bottom center gives you fast access to a task manager, calendar, and world clock, among other apps useful in all contexts. Unfortunately, the default app selection doesn't seem to be customizable. 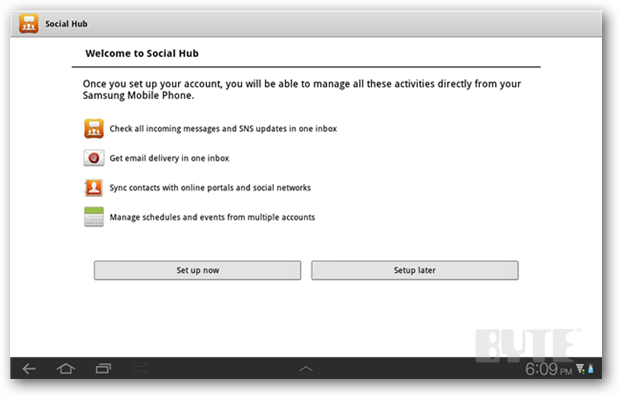 The social hub displays your email and social networks in a single interface.

Apart from the usual roster of Google-specific apps, the Tab 8.9 also comes preloaded with a few Samsung apps called hubs. These hubs let you buy music, movies, and books, or organize your social media activity (Facebook, Twitter, LinkedIn) in a single view. The social hub is where you can add both conventional POP email and Exchange ActiveSync email accounts, all of which can be read in a single combined inbox--and also where you can designate a default email address from which to send when responding to everything you get. I myself have several email accounts scattered here and there which all feed into Outlook in the same way, so this one-inbox system is helpful.

The issue with pro-level features such as encryption and Exchange integration is whether it's possible to administratively enforce the behavior of those features--Android devices have historically lagged in this area, forcing the device makers themselves to fill in the missing pieces. Samsung, fortunately, has done the needed legwork and has blessed the Galaxy Tab 8.9 with its mobile device management tools via the Samsung Approved For Enterprise (SAFE) program. If you're using Sybase Afaria, MobileIron VSP, or SOTI MobiControl to manage mobile devices in your company, you can use any of those products to manage the Galaxy Tab (and the Galaxy S as well).

In sum, the Tab 8.9 is only okay as a personal Android tablet--movies hesitate and the proprietary cable is annoying. But it has just enough enterprise-friendly features to make it a device IT won't mind seeing come to work with you.