With the Galaxy S III smart phone Samsung is seeking to leapfrog the iPhone 4S and possibly the iPhone 5.

So what do you do when you're the biggest maker of smartphone in the world who isn't Apple and it's time to refresh your flagship device (that has sold over 10 million units)? If you're Samsung, you introduce a device that is bigger, faster, smarter, and all around more capable than the previous generation. No half-measures here; the Samsung Galaxy S III looks to make a major jump on its rivals (though the HTC One X is a worthy competitor) and give Apple a serious target for its yet unannounced next generation iPhone. The introduction was made Thursday evening in London.

The Galaxy S III will be available in Europe in May. Samsung did not give a date for US availability, but various reports indicate some time in the summer. 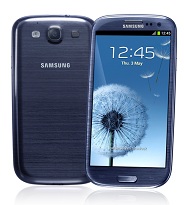 The S III has a 4.8" 1280x720 SuperAMOLED display, which is both larger and higher resolution than the previous S II displays (available in the US in sizes from 4.3" to 4.5" depending upon which carrier version you get). The iPhone 4S display, by comparison, is 3.5" and 640×960 resolution.

Samsung claims that due to a smaller bezel the phone is only 22% larger than the S II, but that would apply to the international version, not the models found in the US. It's also going to be available in 16/32/64 GB versions and supports microSD expansion up to an additional 64 GB.

The S III CPU is a quad-core 1.4 GHz Exynos, a major step up from the dual core Exynos CPU found in the S II which was available in clock speeds from 1.2 GHz to 1.5 GHz depending on carrier model. The performance of previous generation Exynos processors has been smoking fast and there is no reason to believe that the quad-core will be any less impressive. There are unconfirmed reports that a dual core version will also be available.

Among Samsung's advances in the S III is a "natural interaction" approach to the phone interface. It makes use of the cameras and the additional sensors available in the phone to enable features like Smart Stay, where the front camera tracks the movement of the user's eyes to maintain optimum screen display brightness when a user is web browsing or eReading. They've even enhanced the use of the now standard proximity sensor in the phone.

If you're impressed by your phone knowing that you have picked it up and responding appropriately (turning off the screen when it nears your face, or answering automatically when lifted) the new Direct Call feature will probably be something you use. When that annoying text thread demands a phone call, just bring the phone to your ear and it will automatically dial the person you are texting with. And don't forget voice control.

The not too imaginatively named S Voice will be even more of a competitor for Siri than the simplistic voice control features found in current Samsung phones, at least when you look at the demonstration that Samsung gave. S Voice is supporting 8 languages out of the box, so that's a plus. 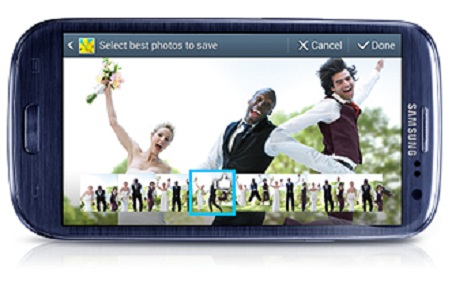 The Galaxy S III picks the best image out of a group that you shoot.

If there is one thing that seems a bit disappointing is that the S II seems to have the same 8 MPix camera found in the current S II and Galaxy Note. It's an excellent camera, but one can always hope for something better in the next generation device.

Given the changes that AT&T (and to a lesser extent T-Mobile) has made to all of the previous Galaxy iterations it will be really hard to put the phone into context until we have an actual US version in our hands. I will, however, hope for the best.