On March 2, Mobile World Congress will kick off, with announcements from Samsung, Microsoft, Qualcomm, HTC, and LG expected to take center stage.

Mobile World Congress 2015 is shaping up to be a busy week full of exciting news and announcements. The show, held in Barcelona, Spain, is the biggest mobile-focused event in the world and is expected to draw more than 70,000 attendees from around the globe. The show floor may not open until Monday, March 2, but the event gets under way Sunday afternoon with nearly a dozen press conferences lined up.

This year will see major announcements from the likes of Samsung, Microsoft, Qualcomm, Intel, HTC, and many others. Much of the news will be concentrated on Sunday and Monday, which is when most of the major mobile announcements are scheduled. Here's a rundown on what to expect from the world's leading tech firms:

Samsung will cap off Sunday's activities with the Galaxy S6, its flagship smartphone for 2015. Rumors about the device and its capabilities have been off the charts, as Samsung seeks a comeback hit with which to battle Apple. The GS6 will be big, will include cutting edge features, and should have a fresh face when compared to Samsung's GS5 and GS4 handsets. Notably, it may come with a curved screen, like the Galaxy Note Edge from last year. Samsung's event is planned for Sunday evening in Barcelona (12:30 p.m. EST).

Monday won't see any many phones, but will see lots from other players in the ecosystem.

Microsoft will be talking more about Windows 10 for smartphones and may show off some new hardware, but that will be limited to low-end models. Microsoft is likely holding back on announcing a Windows 10 flagship smartphone -- something it's sorely lacking at the moment -- until its Build developer conference, scheduled for early May. 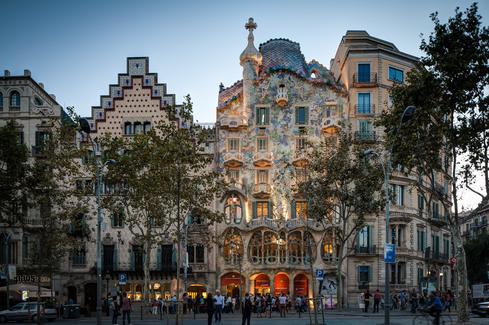 Qualcomm will be talking about its mobile processors and LTE modems. It may reveal the Snapdragon 820, which is believed to be its first custom-made 64-bit application processor.

As far as chipmakers go, Intel and MediaTek have announcements on deck as well. Neither company has events scheduled, but their teams have made it clear that news is forthcoming. Intel may be looking at a refresh of its mobile processor lineup for 2015.

Visa is closing out Monday's activities (10 a.m. EST). The company has been pushing into the mobile payment space hard, and should have new partnerships to talk about.

Believe it or not, BlackBerry is kicking things off in Barcelona on Tuesday (2 a.m. EST). The subject up for discussion at its breakfast event is likely to focus on its enterprise software efforts and not new hardware. However, some rumors have suggested it will reveal a modified version of its Passport smartphone.

Sony doesn't have an event scheduled for MWC this year, but it is widely believed to be revealing the Xperia Z4 tablet at some point during the week. Kyocera will also have new hardware to show off, though it may not be stuff for the US.

Chinese vendors Xiaomi, Asus, ZTE, and Meizu have been fairly quiet ahead of the event, as has Lenovo. These companies likely won't have much to say.

Mobile World Congress 2015 is promising an avalanche of news and announcements. InformationWeek.com will be on site to provide live coverage.

Eric is a freelance writer for InformationWeek specializing in mobile technologies. View Full Bio
We welcome your comments on this topic on our social media channels, or [contact us directly] with questions about the site.
Comment  |
Email This  |
Print  |
RSS
More Insights
Webcasts
Nip Ransomware in the FUD: Detecting Attacks Pre-Encryption
Cybersecurity's Next Wave: What You Should Know
More Webcasts
White Papers
Why Add Security to Your Skill Set and How to Do It
Supercharge Incident Response with DDI Visibility
More White Papers
Reports
Building the SOC of the Future
How Data Breaches Affect the Enterprise (2020)
More Reports

@Dave, yes you are right, but I would like to add many co. do try to keep going upgrade addiction at any way possible... same as gaming pc manf... bottom line end game = proofit ...
Reply  |  Post Message  |  Messages List  |  Start a Board

@batye- I think the upgrade addiction will slow after a little while. Remember when you used to have to buy a new PC ever year or two to stay current? And that slowed down. Mobile hardware will slowdown, too. And for apps, people will slowly begin to realize all of these tiny patches are expensive and will hold off for bigger patches when the hardware slows down.
Reply  |  Post Message  |  Messages List  |  Start a Board

Rooting? I'm certain that's not doable for most users.
We might have different systems, because even though you can uninstall updates, there's no way that you can disable an app from App Manager, at least not in my phone.
Reply  |  Post Message  |  Messages List  |  Start a Board

With IPhones, it's a pretty good life cylce, since even though there's a new device on a yearly basis, prior devices are still both backward compatible and still have the hardware to last for a couple of years (the IPHone 4S is a good experience of lasting well beyond the normal expectation)

With windows phone, yes, some are high lend with very distinct features (like profesional camera capabilities) and others are aimed at entry level users/low cost.

Androids to provide a good low cost entry, but there really isn't a defacto high end version since each provider has there own take on what is considered "high end". (aside from processor and screen capabilities)
Reply  |  Post Message  |  Messages List  |  Start a Board

I did not realize that Windows phones had such different variations. I was under the impression that iPhones were not that different from version to version, at least any more so than Androids.
Reply  |  Post Message  |  Messages List  |  Start a Board

I have no issues with a company constantly seeking to provide updates to it's line of products. But with Samsung, it's at the hardware level, meaning that you'll need to upgrade each time a new iteration is available (which is about every 6 months).

I think that at the end is about preference, but I myself consider that a device should have a decent lifespan before becoming obsolute
Reply  |  Post Message  |  Messages List  |  Start a Board

I think this is a very important question, and one that most providers struggle to answer, since they have to show off bells and whistles to be able to say why they are different from the other.

Both Windows Phones and iPhones provide a very consistent user experience. And even for windows there's a big difference between each type of devices (some are for entry level consumptions, others for enthusiast), but with Android, it seems like a very crowded environment with very little to show off (aside from that one or two "killer" feature).

So I agree with your statement. It's basically the same device but with a different presentation.
Reply  |  Post Message  |  Messages List  |  Start a Board

To me this does not sound good, either. As all the other security areas, as long as you have the interface available, then it will always be abused in the end. How can we guarantee that LI is only used for legal purpose?
Reply  |  Post Message  |  Messages List  |  Start a Board