A new manufacturing technique could accelerate use of the world's strongest material in computers and other products.

Flexible displays, terahertz chips, and vastly improved electronics just got closer to emerging from laboratories and reaching the market, thanks to the work of the Samsung Advanced Institute of Technology (SAIT) and Sungkyunkwan University in Seoul, South Korea.

Samsung Electronics announced Friday that its researchers have found a way to accelerate the commercialization of graphene, a material endowed with exceptional conductivity, strength, flexibility, lightness, and transparency.

Discovered in 2004 by professors Andre Geim and Konstantin Novoselov at the University of Manchester -- a feat that earned them the 2010 Nobel Prize for Physics -- graphene is seen as a wonder material that can revolutionize products and industrial processes across multiple industries.

The reason graphene isn't everywhere is that it's difficult to manufacture. That's why researchers around the globe are trying to simplify the process. It's a matter of scientific and national interest. Those companies capable of integrating graphene into industrial processes are likely to play a major role in the 21st-century equivalent of the semiconductor revolution that played out in the second half of the 20th century.

Last year, the University of Manchester began building a $100 million National Graphene Institute to commercialize the substance. But research groups in China, South Korea, and the US, among other countries, also have recognized the commercial potential of graphene and are racing to find ways to manufacture the material at scale and to make it commercially useful. 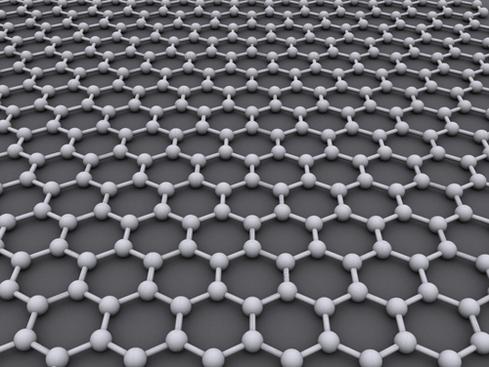 Graphene's presence in consumer goods is limited at the moment to tennis rackets made by Head. But it is likely to be used in future mobile phone touchscreens (particularly flexible ones) and for powerful, energy-efficient computer processors. In November, the Bill and Melinda Gates Foundation awarded a $100,000 grant to the National Graphene Institute to develop a graphene-based condom, which could advance the foundation's public health goals.

SAIT found a way to grow uniform single-crystal monolayer graphene on a silicon wafer, a necessary step to use graphene on chips instead of traditional semiconductors. Previous efforts focused on multi-crystal synthesis -- adding small graphene particles to cover a large area -- but that process degraded the advantageous properties of the material.

In a press release, Samsung Electronics called its researchers' work "one of the most significant breakthroughs in graphene research in history."

Thomas Claburn has been writing about business and technology since 1996, for publications such as New Architect, PC Computing, InformationWeek, Salon, Wired, and Ziff Davis Smart Business. Before that, he worked in film and television, having earned a not particularly useful ... View Full Bio
We welcome your comments on this topic on our social media channels, or [contact us directly] with questions about the site.
Comment  |
Email This  |
Print  |
RSS
More Insights
Webcasts
Strategies for Success with Digital Transformation
Building the SOC of the Future: Next-Generation Security Operations
More Webcasts
White Papers
Passwordless: The Future of Authentication
The 2020 Duo Security Trusted Access Report
More White Papers
Reports
The ROI Of SD-WAN: Not Just A Numbers Game
The Future of Multi-Cloud Networking 2020
More Reports

@ Paul987, you are right there is much more to think of beyond smart phones. But we can't discount smart phones because of their increasing uses in productivity and everyday life. But yes we should look at the bigger picture and broader uses of Graphene. Electronics will definitely be one of the biggest benefactors of this material.
Reply  |  Post Message  |  Messages List  |  Start a Board

Samsung has comfortably set herself as leader of innovation in multifarious fields. Research and Development is at the heart of any company's continued dominance over the market. Besides benefitting the company, money spent on research pays off for the greater good of the society. It is good to see Samsung is not ignoring the importance of R&D.
Reply  |  Post Message  |  Messages List  |  Start a Board

Remember "Buckyballs" from a decade or so ago? Now that manufacturers with DEEP Pockets are starting to get interested in this amazing nano-technology, it may finally migrate out of physics labs and onto the agendas of all sorts of engineers.
Reply  |  Post Message  |  Messages List  |  Start a Board

Imagination is one limit. Adapting legacy manufacturing systems is another. Unfortunately, we will have to wait for core industrial processes to catch up to allow graphene to be produced at scale and in a manner that works with current manufacturing infrastructure. But graphene undoubtedly is pretty amazing stuff.
Reply  |  Post Message  |  Messages List  |  Start a Board

Even if it is a consumer product that brings graphene to the market that is still a good thing.  Someone has to be the company that puts the money and effort into pushing technology.  You're right though that it has many more potential uses and I think that if we see the cost of manufacturing come down because it becomes popular in consumer electronics then we're better off for it.
Reply  |  Post Message  |  Messages List  |  Start a Board

With this, Samsung will increase it's quality and durability.

@Paul
I agree, and I was thinking the same thing as I read the article. Not too surprising, when you consider that half the people in any given public space have their faces buried into smartphone screens :-) I came across an article that mentioned that if dopants can be introduced into graphene, it might be the next candidate material for building IC's. If wonder what the characteristic will be. Speed? Resistance to radiation?  And, depending on who you ask, graphene is 200 to 5000 times stronger than steel - the imagination is really the limit here!
Reply  |  Post Message  |  Messages List  |  Start a Board

Agree with Paul987, mobile is an area that might gain some minor advantage, but other areas are far greater. I see huge applications in areas like transportation: cars that are much lighter, yet much  stronger and safer, electric vehicles that can run much further on a battery, aircraft with greater fuel economy. Hey, even stronger but lighter bicycles if the stuff isn't too expensive.

Space exploration, where every gram of weight put into orbit takes about $20 in fuel (that's $20K per kilogram), is a prime area: The potentially higher cost of working with a material like graphene might be recovered entirely from fuel savings. We're talking about satellites that cost $200 million to build so they're not going to quibble about the high cost of a graphene part; cutting 100 kilograms of weight out of the satellite could cut launch costs by $2 million or more, particularly for high-orbit launches.

Samsung pursues cutting-edge research that may change the world.

Meanwhile, Apple sues Samsung over the ability to tap on a phone number in a text message and have it show up in the dialer.