Samsung recently filed a patent application indicating plans to integrate a projector into its smartwatch, which could turn the wearer's hand or nearby surface into a display.

Samsung is taking its smartwatch to the next level, as indicated in a patent application recently filed with the US Patent and Trademark Office (USPTO). A new wearable design contains a projector to display an interactive interface onto a larger surface.

In its USPTO filing, the tech giant details a wearable device with a tiny integrated projector, which gauges the size of a target area and projects a virtual user interface onto the back of the wearer's hand, arm, and fingers. The idea is to make it easier to navigate a smartwatch without relying solely on its small display.

The smartwatch is also designed with a built-in camera to capture users' actions as they navigate the projected interface. A processor detects the image, interprets user gestures as they are entered, and displays them on the smartwatch screen. 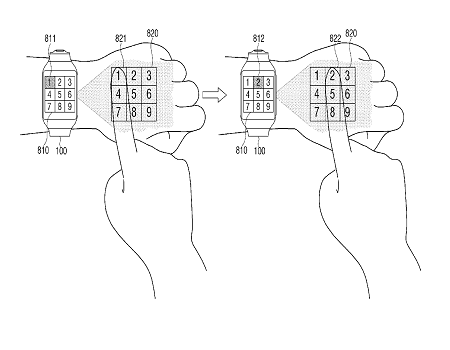 (Image: US Patent and Trademark Office)

In the images accompanying the patent application, Samsung presents a few use-cases for the embedded projector. One depicts someone using a projected keyboard to type out a message; another shows someone navigating an enlarged dial pad.

The embedded projector could also prove useful for apps like Maps. Smartwatch displays are too small for many people to rely on for proper navigation, but the enlarged display would prove useful in accessing key information without having to zoom in and out on a tiny display.

While the use of a hand as a second display seems to be the prominent possibility for this technology, Samsung suggests that the projector could be useful on a variety of large surfaces. The smartwatch could, say, project onto a wall for a bigger interactive interface.

Other images included in the application indicate the company would plan to expand this technology beyond smartwatches to include virtual reality and augmented reality headsets.

Smartwatches are a hot new tech trend. Many of them have the same capabilities as smartphones. However, their displays are often too tiny to send emails, play games, or perform many of the actions typically done on a phone.

Samsung is hoping the embedded projector technology in this wearable design will address the common problem:

"A wearable device typically has a smaller display screen than display screens of other terminal devices," the company writes. "Thus, accurately receiving touch input through a display screen or touch panel of a wearable device can be difficult because a user's finger can be larger than a selection area on the screen, causing the user to accidentally select an incorrect icon or other displayed item."

[Apple: Apps for Apple Watch will have to run natively.]

By enlarging the smartwatch's display with an interactive projected interface, Samsung is taking a new approach to solving a problem that affects a new area of technology. If this design is realized, it could make a difference to many people who were thinking about buying smartwatches, but had doubts about their practical use.

It should be noted that patent applications don't always become reality, so there's a chance we may never see Samsung's design make it to production.

This type of technology seems closer to science fiction than reality. Samsung has its work cut out if it wants to create it.

Kelly Sheridan is the Staff Editor at Dark Reading, where she focuses on cybersecurity news and analysis. She is a business technology journalist who previously reported for InformationWeek, where she covered Microsoft, and Insurance & Technology, where she covered financial ... View Full Bio
We welcome your comments on this topic on our social media channels, or [contact us directly] with questions about the site.
Comment  |
Email This  |
Print  |
RSS
More Insights
Webcasts
Monitoring Critical Cloud Workloads
Disaster Recovery/Business Continuity in the New Normal
More Webcasts
White Papers
Palo Alto Networks Zero Trust Maturity Model
VPN Risk Report
More White Papers
Reports
Are We Cyber-Resilient? The Key Question Every Organization Must Answer
[Report] 2021 State of IT & SecOps
More Reports