The Tab 2 (7.0), in both 3G and Wi-Fi versions, isn't just the first of Samsung's Android-powered tablet offerings for 2012--i's Samsung's first Android 4.0 (Ice Cream Sandwich)-powered tablet. Pricing has not yet been announced. 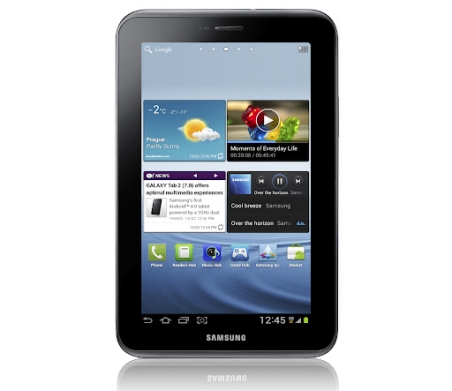 The main attraction here, apart from its reduced size--it's two inches smaller than its predecessor, the Tab 8.9--is the presence of Android 4 with all of its attendant new features. Among them, mentioned in Samsung's press release, is a function that has been the subject of a good deal of critical scrutiny: the facial-unlock feature.

The Tab 2 (7.0) also is slated to include Samsung's Music Hub, Video Hub, Readers Hub and Game Hub applications, which give users access to broad libraries of licensed entertainment content. Most users probably will just opt for one of the existing content-syndication platforms already available through Android--Amazon's Kindle, Barnes & Noble's Nook, Hulu, Netflix, Spotify, and so on.

Samsung has offered the Galaxy Tab in other sizes before. Its earlier Galaxy Tab 8.9, from what we saw before, was only so-so as a media tablet, although its light form factor and on-device encryption made it that much more enterprise-friendly. (BYTE contributor David Chernicoff has also talked previously about rooting the Galaxy Tab 7, an earlier model of the 7" Tab.)

Samsung's tablet and phone product lines have been fraught with fractious legal disputes courtesy of Apple, who has contended that many of Samsung's recent offerings violate Apple's technology, user interface, and design patents. When the Galaxy Tab 8.9 and Galaxy Player were unveiled last year, Apple's patent fight with Samsung over the Galaxy Tab and Galaxy S phones was well under way (and is still raging in California). Samsung has since lost to Apple in Germany, although Samsung has countersued Apple over alleged infringements of Samsung's mobile communications patents. And last week, Apple launched a fresh wave of suits against Samsung alleging the latter's Galaxy Nexus phones are, again, in violation of various Apple patents such as the "slide-to-unlock" function.

The Galaxy Tab 2 (7.0) initially will be available in the United Kingdom starting in March, and available worldwide shortly afterward.

We welcome your comments on this topic on our social media channels, or [contact us directly] with questions about the site.
Comment  |
Email This  |
Print  |
RSS
More Insights
Webcasts
The Threat From the Internet - and What Your Organization Can Do About It
Don't Miss this Dark Reading Virtual Event on Critical Data Breaches
More Webcasts
White Papers
Securing IT & OT in Industrial Environments
Ransomware Response Report: Trends & Outlook
More White Papers
Reports
Gartner's Solving the Challenges of Modern Remote Access
The State of IT Operations and Cybersecurity Operations 2020
More Reports