Samsung has revamped its lineup of iPad competitors with new 9.7- and 8.0-inch Galaxy Tab2 tablets.

Samsung revealed two new slates today to tackle Apple's iPad in the teetering tablet market. The Galaxy Tab S2 comes in big and small sizes and features a refreshed design to appeal to the widest possible set of users.

The tablet market will contract a bit this year, according to IDC, but that's not stopping hardware makers from developing new models meant to tempt mobile professionals and consumers alike.

The Galaxy Tab S2 tablets are thinner and lighter than previous generations, measuring 5.6mm thick and weighing 13.72 and 9.35 ounces for the 9.7- and 8-inch models, respectively. Samsung gave the tablets a dash of style with a metal frame, and improved usability thanks to the more compact sizing.

The Tab S2 tablets share all specs, with the exception of screen size and battery size. Samsung endowed the tablets with its super AMOLED display technology, which it says has improved contrast and more accurate color. Both tablets have 2,048 by 1,536 pixels (QXGA resolution). The 8-inch model has a higher pixel-per-inch ratio than the 9.7-inch model, but they both offer enough pixels to keep even the pickiest eyes happy. Samsung says the high resolution and rich contrast make them ideal for consuming media, er, reviewing those PowerPoint decks. 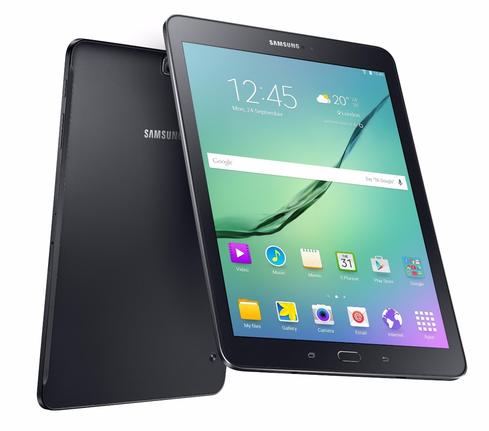 On the inside you'll find an octa-core processor with four cores at 1.9 GHz and four cores at 1.4 GHz. Samsung didn't call out the processor's manufacturer by name, but it's either Qualcomm or Samsung itself. The processor is mated to 3 GB of RAM, and either 32 GB or 64 GB of internal storage. Both devices support memory cards up to 128 GB.

They each have a range of sensors, such as accelerometer, gyroscope, compass, and fingerprint scanners built into the home button. Mobile professionals will be able to secure their tablet with a thumbprint if they wish.

[Read about the ways Google is using AI to beat spam.]

Wrapping up the hardware, Samsung gave the two tablets 8-megapixel main cameras and 2.1-megapixel user-facing cameras for video chats. The main camera can capture video up to 4K.

On the software side of the equation, the Tab S2 slates run Android 5.0 Lollipop with Samsung's TouchWiz user interface. The most compelling feature of TouchWiz is the split-screen multitasking capability, which lets you run two apps side-by-side on the screen at the same time.

Microsoft's Office productivity suite is onboard for creating and editing documents. Moreover, Samsung is giving Tab S2 owners 100 GB of Microsoft OneDrive cloud storage for all those work documents. IT will be happy to know the Tab S2 includes anti-malware software.

The Samsung Galaxy Tab S2 9.7-inch and 8.0-inch tablets will be available in global markets starting in August. Pricing was not revealed.

Apple's iPads have screens measuring 9.7 inches and 7.9 inches. The company is rumored to be bringing a 12.9-inch iPad Pro to market later this year. Together with the expanded multitasking and keyboard features found in iOS9, the iPad Pro could be an enterprise killer.

Samsung didn't reveal any plans for a larger, enterprise-focused tablet.