Florida State University researchers have found that mobile phone notifications alone are enough to distract us from the task at hand, even if we try to ignore them.

Mere awareness of a phone message notification represents enough of a distraction to impair people's abilities to perform tasks on computers, according to a study by researchers at Florida State University.

"The Attentional Cost of Receiving a Cell Phone Notification," co-authored by Cary Stothart, Ainsley Mitchum, and Courtney Yehnert, states that "cellular phone notifications alone significantly disrupted performance on an attention-demanding task, even when participants did not directly interact with a mobile device during the task." While the study did not specifically address wearable devices such as smartwatches, it's not hard to imagine the level of distraction being magnified by a vibrating notification on one's wrist.

The study, published in the Journal of Experimental Psychology: Human Perception and Performance, involved sending notifications to participants' phones while the participants conducted sustained tasks on a computer, without informing the participants of the purpose of the research until the conclusion of the experiment.

In an email interview with InformationWeek, Stothart, a doctoral student in psychology and lead author of the study, explained the rationale for the lack of disclosure. "We believe that the mechanism behind the effect is mind wandering, which basically refers to thinking about things (usually personally relevant things) that are not related to whatever task you're currently doing," he said. "If participants knew that the notifications were coming from us, then they would have been much less likely to think about them as they would already have known that the source of the notifications and their content is not personally relevant."

According to the study, the magnitude of the observed distraction effects can be compared to the distraction observed in those actively using a mobile device, for voice calls or texting.

This raises a significant question: Can notifications received by a phone in one's car produce distraction comparable to active phone use in the vehicle?

That question isn't addressed by this study, but it's the one the researchers plan to investigate in followup work using a driving simulator.

"It's difficult to map our task onto driving as the two tasks (sustained attention task and driving) are very different," said Stothart. "If mind wandering is the mechanism behind the notification effect, then we would expect knowledge of notifications to have the potential to cause accidents as mind wandering has been found to have that potential."

The perils of distracted driving are well-documented. According to the US Department of Transportation, 3,154 people were killed and about 424,000 people were injured in motor vehicle crashes involv­ing distracted drivers in 2013.

A 2011 CDC study found that more than two-thirds of adult drivers admitted talking on a cell phone while driving at least once in 30 days prior to their survey response. 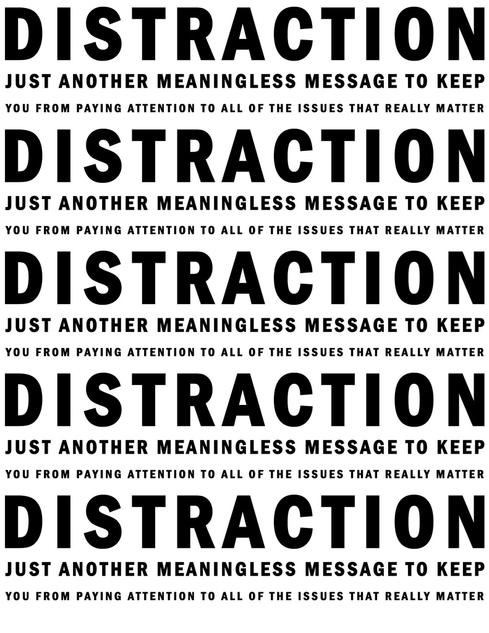 Even absent findings that specifically tie unanswered phone notifications to traffic accidents, the FSU study suggests that ignoring a mobile phone will not prevent distraction. Beyond road safety, that has potential ramifications for workplace productivity, not to mention personal equanimity.

Stothart stressed that while the study didn't attempt to quantify any correlation between distraction and productivity, he believes that the potential productivity loss from distraction could be substantial. "If someone is attempting to ignore notifications coming from their cell phone while writing a paper or doing some other task that requires some sort of cognitive load, and they find that they are being distracted by thoughts about those notifications, then their productivity will likely be negatively impacted," he said.

Other research on how the distractions of open offices affect productivity support this view.

The paper's authors argue that the impact of unavoidable distraction needs to be considered as mobile phones affect more and more aspects of our lives.

"We would recommend that people turn off or put away their cell phone when they need to focus on a task as the mere knowledge of having received a phone notification may distract them," said Stothart.

If only it were that easy.

Thomas Claburn has been writing about business and technology since 1996, for publications such as New Architect, PC Computing, InformationWeek, Salon, Wired, and Ziff Davis Smart Business. Before that, he worked in film and television, having earned a not particularly useful ... View Full Bio
We welcome your comments on this topic on our social media channels, or [contact us directly] with questions about the site.
Comment  |
Email This  |
Print  |
RSS
More Insights
Webcasts
Cybersecurity Risk Management
Managing a Hybrid Cloud Infrastructure
More Webcasts
White Papers
2020 SANS Enterprise Cloud Incident Response Survey
The Top 5 Mistakes Everyone is Making in Vulnerability Remediation
More White Papers
Reports
The Infoblox Q4 2020 Cyberthreat Intelligence Report
The Malware Threat Landscape
More Reports

I agree to truly multitask is a rare talent most of us simply try to do two things at once with both getting partial focus and attention.
Reply  |  Post Message  |  Messages List  |  Start a Board

Broadway time and time against studies prove that multitasking is making us less efficient.We are simply causing ourselves stress and not getting much done.
Reply  |  Post Message  |  Messages List  |  Start a Board


It is definitely true my cell phone is distracting when it's in the same room where I am working. I will often put it in a drawer or leave it in my purse to avoid the distraction. i put it in the back seat so there is never a distraction in the car. Distracted driving is such a major issue that we need to address it now before more lives are lost. Parents driving distracted are only showing their teens it's okay to drive and text.

jastroff, Your local newspaper "insisted"? :D I am pretty sure you can turn that off as well, if you wish. No application can have more power over your phone than yourself. I see you don't want to turn off all the alerts from your phone. But then. it's not that you don't have the option to not get distracted if they distract you, it's that you don't want to turn what distract you off. That's different than blaming the notification, or the smartphone for causing you to distract. If you really need to focus on some work, for instance, you could set your phone to be silent for a couple of hours and then check your notifications whenever you take your coffee break, or when you feel like it. That's what I do, and it works very well for me. I am the one who has the power over my phone and the notifications. I make it work according to my needs. You don't need to change your notifications one by one every time. I find the 'silent' button very useful. I am pretty sure your phone has a 'silent' button. -Susan
Reply  |  Post Message  |  Messages List  |  Start a Board

jastroff, As you said in your comment, you can program your phone to alert you of what to want only. This means that all those alerts that are not really important and you have mentioned could be easily deleted them from your alert choices, right? You can also set your phone to silent when you want to focus on something and don't want to receive any notification. You have all the choices right on your fingertips. This is to say that I don't really see any problem with the option of having notifications on your smartphone. Basically, it's just that, an option. You can always have the control of what you want to do with them. :) -Susan
Reply  |  Post Message  |  Messages List  |  Start a Board
Editors' Choice
Hot Topics