The Sony Xperia Z5 features an incredible Ultra HD display, a 23-megapixel camera, a waterproof chassis, and a two-day battery life. Yet its 4K display is the real stunner.

BERLIN -- On Wednesday at the IFA show here, Sony revealed a broad range of new products, but none was more impressive than the Xperia Z5, its flagship smartphone for the year. The device boasts a premium design, comes in two sizes, and features a spec list that's sure to tempt even the most devout iPhone and Samsung Galaxy owners.

The Xperia Z5 takes direct aim at competing models from Samsung, Apple, HTC, and LG -- and it might beat some of them.

A metal frame and dual glass panels form the exterior. Sony added a fingerprint sensor to the screen lock button on the side edge for instant unlocking. Despite the exposed headphone jack and USB port, the Xperia Z5 is waterproof. It can sit in up to one meter of water for up to 30 minutes. Few flagships can make that claim.

The Z5 includes support for wireless charging. The battery lasts for two full days, according to Sony. QuickCharge is present, as well, thanks to the octacore Snapdragon 810 processor.

Sony improved the camera in several different ways. For a start, it bumped the sensor from 20.7 to 23 megapixels. The latest generation of Sony's Exmor RS sensor is better at taking images and video in the dark. It can record 4K video with high dynamic range. Most impressively, Sony sped up the autofocus mechanism, which can focus in 0.03 seconds.

The display measures 5.2-inches across the diagonal and runs the standard full HD resolution. 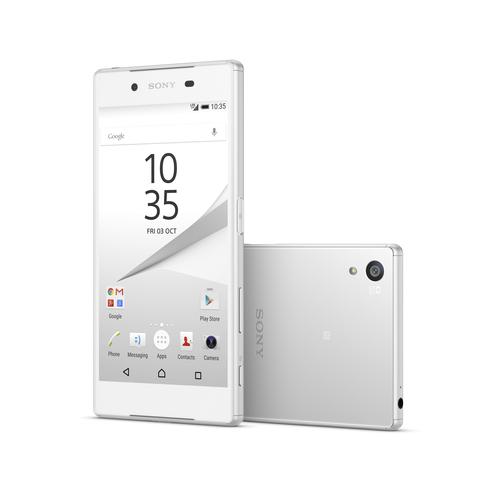 It follows the same path set by previous generations, but takes things to the next level. The Xperia Z5 Premium is the first smartphone to offer a 4K display (3,840 by 2,160 pixels) at 5.5 inches. Sony borrows heavily from its television division, and includes its own Bravia Engine and TriLuminos technology to push the boundaries of its displays.

The sample 4K screens on hand in Berlin were spectacular in their resolution, color, and clarity. The screen can upscale full HD video content on the fly so that it looks good on the Ultra HD display.

The Premium has all the same features of the Xperia Z5; it simply adds the 4K display and slightly larger battery.

Sony also showed off the Xperia Z5 Compact on Sept. 2. It includes all the high-end tech specs of the Z5, but stuffs them into a smaller package with a 4.7-inch display. This means people who prefer smaller handsets can enjoy all the same features without missing a beat.

The phones will be compatible with the GSM networks run by AT&T and T-Mobile in the US.

Pricing and availability for these handsets was not released, but expect them to be expensive. Sony's Z3 and Z4 handsets sell for $649 and up. The Z5 Premium will likely cost at least $700, if not $800.

@bfately914, my point exactly.  This phone should be at AT&T or Verizon right now.  Sony's development cycle is ALWAYS two quarters or more late to market.
Reply  |  Post Message  |  Messages List  |  Start a Board


We've been through this before with the Z2, Z3, Z4 and now the Z5.  The specs and demo models get released months or even a year before the product hits the US market.  Anybody in the US actually buy a Z3?  It was announced about this same time of the year before and never made it to the US market.  I bet by the time the Z5 hits the American store shelves both Samsung and Apple will already have 4K screen products on the shelves.

Sony seems to have built a lovely smartphone here, but without an Apple-like ecosystem of simple usage the bells and whistles (4K on a 5" screen? 23MP camera?) will likely become either obsolete or, as I suspect, solutions looking for a problem.
Reply  |  Post Message  |  Messages List  |  Start a Board
InformationWeek Is Getting an Upgrade!