People on the streets of London, Düsseldorf, Bern, and other European cities will soon see robots rolling along the sidewalk to deliver prepared food, parcels, and retail goods to nearby customers.

Starship Technologies, a robotics company launched two years ago by Skype cofounders Ahti Heinla and Janus Friis, says it plans to announce on Wednesday four industry partners that will be testing its delivery robots: Just Eat, a European food delivery company; Hermes, a German parcel delivery company (not to be confused with the similarly named French luxury goods maker); Metro Group, a major German retailer; and Pronto.co.uk, a food delivery service based in London.

The four companies later this month will begin tests with real customers to assess the viability of automated product deliveries. A similar program is being developed for cities in the US. Starship has been conducting proof-of-concept tests without real customers for the past nine months.

The Starship robot doesn't look much like a starship or the sort of anthropomorphic robot depicted in classic science fiction. It resembles a cooler with a sunroof, six wheels, and an antenna.

In a phone interview, Starship Technologies' COO Allan Martinson mentioned hearing the robot compared to a cooler and said the similarity wasn't obvious to research and development personnel based in the often chilly northern city of Tallin, Estonia, where coolers don't have quite the cultural relevance as they do in more southern climes.

The robot, which for better or worse has no name, is mostly autonomous, relying on on-board cameras and GPS for obstacle-avoidance and navigation. But it is overseen by a human controller at a remote facility when performing its duties. Martinson said during internal testing, one person has overseen as many as four robots at once. 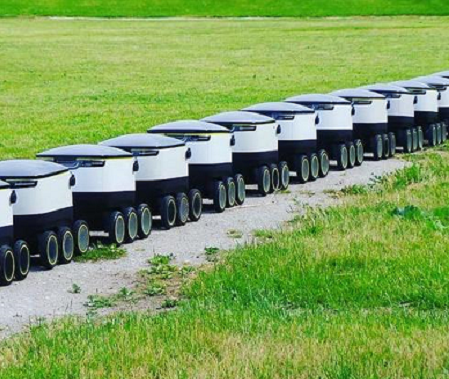 The robot was designed for making deliveries to customers within two or three miles of local stores, at a cost that's 10 to 15 times less than existing local delivery options. Eventually, the service is expected to cost about $1.50 per delivery, though Martinson said that the robots could become even more cost effective over time as the technology becomes more widespread. The robot can accommodate about 20 to 25 pounds of goods.

Frank Rausch, CEO of Hermes Germany, said in a statement that the goal of employing robots is to provide better customer service. "At Hermes we believe that parcel delivery's main goal is to fully satisfy the customers' needs in receiving their online shopping orders as fast and convenient as possible," he said. "Nobody likes to spend hours waiting for the courier just to have a parcel delivered."

Martinson said the proof-of-concept testing has provided the company with a lot of insight into the social aspects of human-robot interaction, a particularly important issue because Starship's robots will be travelling on public sidewalks and crossing public roads. Presently, most interaction with mobile robots occurs on private property, in controlled settings like a hospitals, hotels, or theme parks, excluding encounters with Tesla cars operating under autopilot.

During proof-of-concept testing, Martinson said, Starship's robots have operated in 39 cities and 12 countries. In more than 5,000 miles travelled, the robots met about 400,000 people. One of the most interesting findings, Martinson said, was that people's reactions have been fairly uniform. Between 60% and 80% of people don't pay attention to the robot, he said, and the rest are almost all positive interactions. He said that people may show more interest when they have time to spare, as they tend to have on weekends.

"There have been only a few incidents with people under the influence of something or trying to show off," Martinson said, adding that none of the incidents resulted in  personal injury, property loss, or damage to the robot.

The robot requires customers to meet it at their doors or at the bottom of stairs, since it can't climb. "We notify the consumer that food or groceries have arrived," Martinson said. "As part of our initial testing, we have seen that people really don't mind [coming out to meet the robot]."

Martinson expects robotic delivery will exist alongside more traditional delivery systems for some time, depending on how businesses and customers respond. He sees it as an economic enabler. "It's something that local restaurants never dreamed they'd have," he said.

Politicians and regulators, said Martinson, have been supportive because the robots align with common civic priorities, like reducing damage to the environment, reducing road congestion, helping people with disabilities and the elderly, and promoting economic development and employment. The company recently received approval from Washington, DC to test its robots on city streets, through the city's Personal Delivery Device Pilot Act of 2016.

Thomas Claburn has been writing about business and technology since 1996, for publications such as New Architect, PC Computing, InformationWeek, Salon, Wired, and Ziff Davis Smart Business. Before that, he worked in film and television, having earned a not particularly useful ... View Full Bio
We welcome your comments on this topic on our social media channels, or [contact us directly] with questions about the site.
Comment  |
Email This  |
Print  |
RSS
More Insights
Webcasts
People Are The Most Important Part of Autonomous SOC
Nip Ransomware in the FUD: Detecting Attacks Pre-Encryption
More Webcasts
White Papers
Insider Risk Management: A Better Way to Prevent Data Leaks
A Business Case for Vulnerability Remediation Orchestration
More White Papers
Reports
Key Strategies for Managing New Risks in Cybersecurity
2021 Top Enterprise IT Trends - Network Computing
More Reports

Interesting implementation in cities that can handle it -- hopefully low theft rates. Also good for closed communities like Seaside Florida in the US and other kinds of places, like a big university campus
Reply  |  Post Message  |  Messages List  |  Start a Board

I love this idea. It makes a lot of sense - especially in communities with elderly people who can't get to shops easily on short notice.

However I am concerned about theft and vandalism. While some cities may have an ethos of these things being left alone, I can see them being tipped over quite often in some areas. There's also the danger of smashing the top and stealing what's inside.

I imagine these are fairly well tracked though, so no one is going to steal an entire robot, but damaging them seems almost inevitable.
Reply  |  Post Message  |  Messages List  |  Start a Board
Editors' Choice
Hot Topics