Pre-orders for Microsoft's Surface Book kicked off last week and have blasted through the early supply. In addition, Redmond is looking for customers to trade in their MacBooks.

Demand for the Microsoft Surface Book appears to be outstripping supply. Orders placed today, Oct. 16, for the new laptop won't ship until December. At the same time, Microsoft is offering $200 to $300 for certain trade-ins.

The Surface Book produced lots of oohs and aahs when Microsoft unveiled it in New York City earlier this month. Those oohs and aahs are translating into ka-ching for Microsoft, which has seen much of the laptop's launch stock snapped up by early adopters.

The laptop comes in five base versions with varying amounts of internal storage and processor options. The least expensive version, which costs $1,499, includes 128GB of storage, an Intel Core i5 processor, and 8GB of RAM. It appears to be the least popular model, since orders placed today for this entry-level model will ship in five to six weeks. Three of the more expensive models show shipping times in the seven- to eight-week range, which puts them in consumer hands in early December. 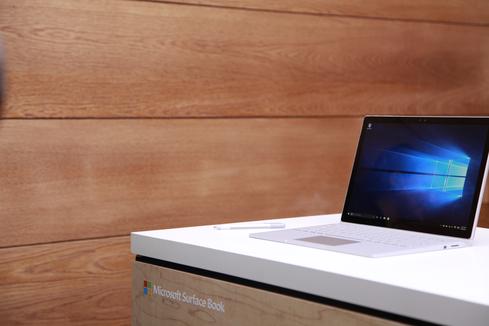 The 256-GB Core i5 model is listed as "coming soon." Customers can sign up for email alerts concerning its availability.

The Surface Book has a 13.5-inch PixelSense screen with 3000 by 2000 pixels. It weighs in at 3.34 pounds, and its screen can detach from the keyboard base to provide a tablet computing experience. It offers up to 12 hours of battery life and supports stylus-based input via the Surface Pen. The Surface Book includes a typical set of ports, including USB, SD card, headphones, and Mini DisplayPort. It runs the full version of Windows 10.

The Surface Pro 4 is somewhat more available. The two least-expensive models will ship by Oct. 26. The three more costly variants are showing ship dates of Nov. 20. That's a few weeks earlier than the Surface Book. Pricing for the Surface Pro 4 starts at $1,000 and runs up to $2,200.

Microsoft will let you shave a few hundred dollars off those prices if you don't mind trading in your old laptop. Microsoft isn't taking just any old hardware. There are terms and conditions.

The deal, called Easy TradeUp, requires people to buy a brand new computer valued at $599 or up. Once purchased, people can then make a trade-in claim online. In order to qualify, the trade-in has to be less than six years old, have a screen measuring at least 11.4 inches, and needs to power on. Windows machines that meet these criteria will garner a $200 trade-in. Owners of MacBooks that meet these criteria will be rewarded with $300.

Microsoft did not say how long it will offer the promotion, but it is part of a larger push to convince consumers that Windows 10 machines are worth the upgrade.

Eric is a freelance writer for InformationWeek specializing in mobile technologies. View Full Bio
We welcome your comments on this topic on our social media channels, or [contact us directly] with questions about the site.
Comment  |
Email This  |
Print  |
RSS
More Insights
Webcasts
People Are The Most Important Part of Autonomous SOC
Don't Miss This Cybersecurity Virtual Event
More Webcasts
White Papers
How a Trading Floor Continues its Operations During COVID-19 Lockdown
How to Build Your Incident Response Plan
More White Papers
Reports
Key Strategies for Managing New Risks in Cybersecurity
2021 Top Enterprise IT Trends - Network Computing
More Reports

As usual though. We have no idea what this "sellout" means, as Microsoft won't give us any numbers. We can guess how many they will sell in a year though. We do know that few $799 models sell, as they are underpowered. We do know that the $999 model is the minimum for satisfactory performance (we read of this from various places, including reviews, and recommendations), and we do know that the keyboard is pretty much a required accessory. Going by that, we can be conservative, and assume about $1,500 as a good starting point for an average sales price. Microsoft sold about $3.4 billion worth of surface tablets, including accessories such as the keyboard, over the year. That gives about 3 million sold for the year. If the average selling prices were higher, then fewer were sold. Pretty simple, really. But we don't know what the pre-sales were. Were they higher or lower than those of last year, the number of which we don't know either?
Reply  |  Post Message  |  Messages List  |  Start a Board

I'm beginning to like this new computing trend. Microsoft and Apple will compete on whom can produce the thinnest and most powerful laptop.  This is the sort of laptop Microsoft needed to release to complete with Apple's Macbook Air.  A think with the huge line of windows computers, surface, tablets, they are really trying hard to become the all system for consumers both for productivity and entertainment.
Reply  |  Post Message  |  Messages List  |  Start a Board
Editors' Choice
Hot Topics