IT pros are using their iPads at work a lot, usually for communication, but more for data consumption than production.

IDG recently released the results of its iPad for Business Survey 2012.

According to the survey, the iPad is used daily by up to 60 million users worldwide. The majority of iPads are used at home--60% never leave the house. Seventy percent of usage happens in the living room, as the iPad is considered by many a "lean-back" device, or one that's typically used while relaxing rather than for work.

Still, Apple's tablet is finding its way into the work world. According to the survey, 67% of North American professionals who own iPads use them at work. Of those, 93% use it for communication. Thirteen percent have their devices supplied by their employers. 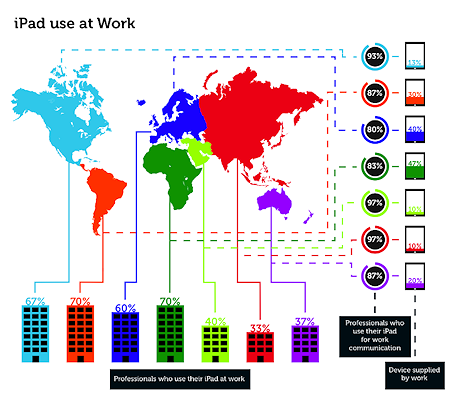 Of course, use by business and IT professionals is very different from what we see in home use. At work, iPads are more intensively used across a wider range of scenarios. Of IT professionals who use their iPad at work, 79% say they use it while traveling, perhaps an indication that the iPad is starting to replace laptops for travel. Only 12% say that the tablet has replaced their laptop completely. However, 54% say that it has partly done so. Desktop PCs aren't being replaced as readily. Only 6% say the iPad has become a desktop replacement.

Interestingly, some regions are seeing faster growth of iPads replacing laptops than others. For instance, in South America, 27% of IT professionals have completely replaced their laptop with their iPad.

Most of the respondents who said they always used their iPad for work said they used it for Web browsing (79%), reading (76%), news consumption (73%), and work communications (54%).

Personal use at work among these professionals is less popular. Only 44% use their iPad for social media. Forty-two percent use it for personal communication, and 31% for entertainment. 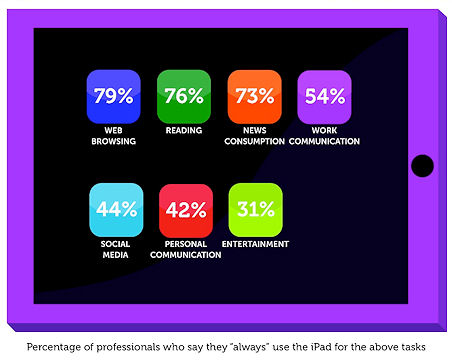