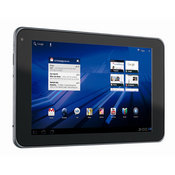 G-Slate From LG And T-Mobile

LG and T-Mobile announced the G-Slate a few hours before Google fully unveiled the power and features of Android 3.0 Honeycomb. The G-Slate will be T-Mobile's second tablet (following the Samsung Galaxy Tab), but its first Honeycomb device.

The G-Slate boasts some impressive specs. It has an HD 8.9-inch 3D-capable display; viewing 3D content will require glasses. Users will be able to watch 720p HD content on the G-Slate, as well as deliver 1080p HD/3D content via HDMI to other playback devices.

Under the hood, the G-Slate is powered by a dual-core 1Ghz Nvidia Tegra 2 processor and it has enhanced 3D graphics support. Android 3.0 Honeycomb supports Flash for native browser video playback, and it has other gaming niceties, such as Wi-Fi, a gyroscope, accelerometer, and adaptive lighting.

As if the G-Slate doesn't have enough 3D capabilities already, LG decided to endow it with dual-cameras for 1080p HD 3D video capture. The cameras also shoot still images at 5 megapixels, and are supported by an LED flash. The G-Slate also has a 2-megapixel, user-facing camera for video chat support.

LG and T-Mobile said the G-Slate is the first in a coming line of G-series devices. It can access and use T-Mobile's HSPA+ network, which can be used for video chats, TV streaming, and gaming.

At first blush, the G-Slate looks like a contender. Its 8.9-inch display puts it smack in the middle of the 7-inch and 10-inch tablet camps, which could be a positive differentiator for the G-Slate. Devices such as RIM's PlayBook and the Samsung Galaxy Tab have 7-inch displays, while the Motorola Xoom and Apple iPad have 10-inch (or, near 10-inch) displays. LG says the G-Slate is an ideal device for reading.

With a dual-core processor and 3D graphics support, it sounds as if LG is taking performance seriously -- as it should. Many of the tablets primed to hit the market are hoping to snag gamers from other mobile gaming platforms.

What really sets it apart are the 3D video-shooting capabilities. None of the other tablets announced provide that feature. LG hasn't said exactly how 3D content is going to be streamed and what device requirements will be in play, but it sounds promising. The 2-megapixel user-facing camera is also a step above what most other vendors are offering at the moment. Whether or not that translates into better video chats, no one knows.

Google is providing a more detailed look at Android 3.0 Honeycomb later today. InformationWeek will be on hand to provide you with all the news and first impressions.

The G-Slate isn't going to reach store shelves until later this spring, and pricing was not specified.