Take a close look at six tablet options, from Apple to Android, with a focus on pros and cons for enterprise users. 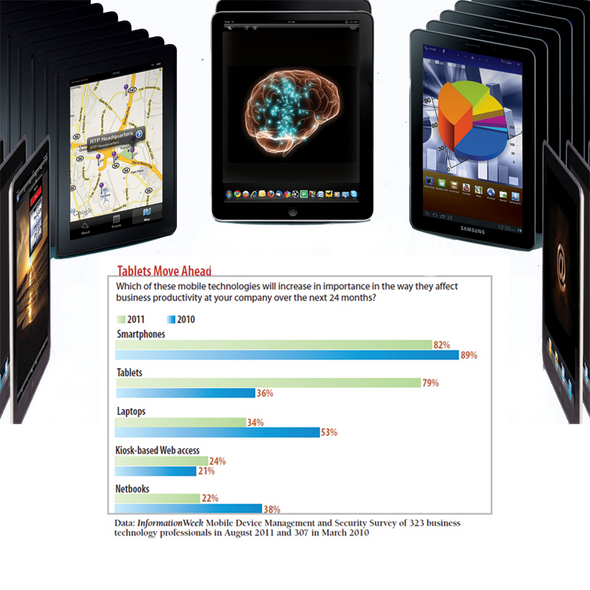 Tablet mania is in high gear for 2012, and consumers are being bombarded with offerings from vendors small and large. Given the consumerization of technology, this fusillade will ultimately land on IT, so you'll want to be prepared. Our recent Enterprise Buyer's Guide: Tablets examines the current state of business-friendly tablets by analyzing the specs and features of six representative products with a focus on enterprise readiness. We take a close look at the individual entrants in this slideshow.

Until recently, the tablet market has in essence been the iPad market. But Google's rapid software development cycles, open licensing, and recruitment of a plethora of smartphone-turned-tablet OEMs has allowed Android products to chip away at Apple's lead. Last month's Consumer Electronics Show made clear that 2012 will bring yet more upheaval to the tablet landscape.

Google, with its stable of OEMs, upped its game, showing off a new tablet-optimized Android release, 4.0, a.k.a. Ice Cream Sandwich. Meanwhile, Microsoft displayed its dual-purpose Windows 8 laptop/tablet double play, which promises a fresh interface running on an assortment of powerful new hardware platforms, some of which will actually run on Intel processors.

Having ignored the white-hot market in mobile hardware, Intel made a strong case for relevance by introducing new low-power, fully integrated systems on a chip optimized for smartphones and tablets. It demonstrated an Android tablet from Lenovo, expected to ship soon, but the big Windows 8 tablet rollout will have to wait until later in the year.

Although absent from the CES festivities, Apple remains the 800-pound gorilla, with talk of an iPad update this spring running rampant. Yet despite the raft of Android devices introduced over the last year (some of them profiled here,) Apple still sells more than a million iPads a week and is widely estimated to control more than 60% of the tablet market. While Apple's share is likely to continue eroding, most of the damage will come from consumer-oriented devices, like Amazon's Kindle Fire and Barnes & Noble's Nook, that are more about content consumption--e-reading and Web browsing--than the applications that enterprises care about.

For now, though, it's still a two-platform race in enterprise tablets: Apple and Android. Although included in this rundown largely because of the entrenchment of its BlackBerry franchise, a halo effect that piqued interest among many enterprise users, RIM hasn't overcome disappointment with the PlayBook's OS and remains an also-ran.

Yet 2012 promises plenty of changes. Apple's refreshed iPad will certainly include faster hardware, updated software (Siri support anyone?), and probably a higher-resolution display, while Android devices continue playing feature leapfrog. Microsoft and Intel remain the wild cards. How well Windows 8 works as a tablet and whether Intel can make a splash remain open questions. What's certain is that tablet technology will continue to evolve at a breakneck pace.

Now take a closer look at six tablets and their pros, cons, and main differences for enterprises.