Tablets And PCs Square Off - InformationWeek

Tablets do work better than laptops for some people and tasks. Tailor the device to the workload.

In two short years, tablets have gone from a consumer luxury to a burgeoning business platform: a slim, light, mobile appliance with a long battery life that can replace, and even outperform, PCs in many situations.

But enterprise tablet use is still immature, haphazard, and user-driven. Sure, an iPad makes a handy alternative to a bulky laptop for keeping up with email on the go, but its capabilities enable so much more.

That said, it's a mistake to think tablets can do everything, says Dan Kerzner, senior VP for mobile at MicroStrategy. While there are cases where they can replace PCs, it's usually just for select tasks, not an employee's entire environment. He likens tablets entering the enterprise to microwave ovens in the kitchen: "People found that the microwave was great for macaroni and cheese, but not for chicken."

To make tablets work for the business, IT organizations must define a policy: Who, if anyone, gets a company-issued tablet? Which personally owned devices are allowed on the network, and is a mobile device management client required? Which tasks and applications will IT support? Who pays for 3G/4G? Base your plan on these five strengths of each platform.

1. Size and power: Any road warrior who moves to a tablet after schlepping around a laptop, power brick, various accessories, and appropriately sized ballistic nylon laptop case instantly realizes the beauty of tablets: portability. The newest iPad is less than 0.4 inch thick and weighs just under a pound and a half. Even the sveltest laptop, the 11-inch MacBook Air, weighs a pound more and is 0.3 inch thicker at the hinge.

The sorry state of laptop battery life is such that you're lucky to get five hours of Wi-Fi Web browsing off grid, and even a 13-inch MacBook Air--the state of the art for power-efficient portables--maxes out at around seven hours. The iPad runs for a good 10 hours on Wi-Fi and nine on cellular.

2. Network support: Although Wi-Fi is prevalent, it's neither ubiquitous nor completely reliable. And while there are options for connecting your typical business laptop to 3G--USB adapters, smartphone tethering, 3G Wi-Fi hotspots--they add complexity. Of course, not all tablets come so equipped, but most do offer wireless networking, typically superfast LTE.

3. Instant on, instant off: Unlike even an SSD-equipped PC, which can still take 20 or 30 seconds just to reach the login screen (and much more to load the entire desktop), an iPad fires up in about 10 seconds--that's on the rare occasion you actually do restart the device; most of the time it resumes as soon as you flip up the smart cover. This longevity (battery life) and immediacy (instant on) are fueling new categories of enterprise apps for roaming workers, particularly salespeople, field service techs, and physicians, that weren't feasible on a PC, says Kevin Spain, general partner at Emergence Capital Partners, an early-stage venture capital firm.

Get the full-length Tablet vs. PC Form-Factor Smackdown report
>> See all of our reports <<

4. Simple interface: The uncluttered, swipeable tablet UI, where each app has its own icon and there are no menu bars or system tray, is easy to navigate even when you're distracted. In contrast to PC applications, which, sagging under years of feature creep, are littered with options the average person seldom uses, good tablet apps are focused on a single task.

Many tasks are more efficiently accomplished with a touch screen versus keyboard and mouse. Contrast the ease of digesting postings and articles on Flipboard and Zite or navigating Maps on the iPad, with browser-based PC alternatives such as TweetDeck, Facebook, Google Reader, and Google Maps. Even something as simple as reading and annotating PDFs is more convenient on a touch screen, gesture-based tablet than in Preview or Acrobat on a PC.

5. Location and position awareness: Tablets have various sensors that provide location and position awareness--features unheard of on a PC. Tablets include location services, using either hotspot databases or, for models with a 3G/LTE chipset, GPS along with a gyroscope and accelerometers providing orientation data. This data enables innovative apps not possible on a PC, with features like localized search results, automatic location check-in on social networks such as Facebook and Yelp, and gesture-based navigation through 3-D environments. 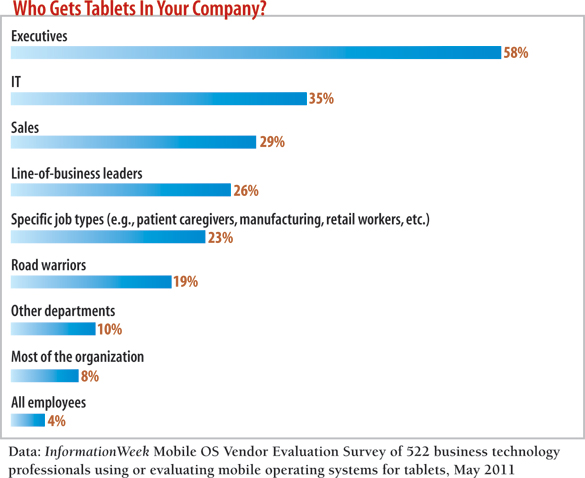