Founder Elon Musk is leading the electric-car pioneer into the energy infrastructure business. Amazon and Target are among those with pilot projects in the works.

Tesla Motors CEO Elon Musk on Thursday introduced Tesla Energy, a line of large batteries for residential and commercial use. The batteries are part of Tesla's overall renewable energy strategy, which includes commercial pilot programs with Amazon and Target.

"I think we collectively should do something about this [dependence on fossil fuels]," said Musk at a press event, pointing to a graph showing rising carbon dioxide levels, "and not try to win the Darwin Award."

Tesla Energy redefines Tesla Motors, which now characterizes itself not as an automotive company but as "an energy innovation company."

Tesla Motors has always been more than a car company. It is a software and services company, and an energy infrastructure company, thanks to the need for charging stations to support its vehicles. By entering the residential battery market, Tesla is broadening its aspirations in the energy industry.

Musk mentioned his intention to enter the high-capacity battery market back in February. Such batteries provide a means of storing energy from solar panels or the electrical grid, of ensuring energy availability during blackouts or at night for those dependent on solar power, and of mitigating energy prices when demand for power is high. Tesla expects its Powerwall line of residential batteries to begin shipping in late summer, with prices ranging from $3,000 (7 kWh) to $3,500 (10 kWh), plus installation.

Musk's pitch to potential battery buyers is simple: "The issue with existing batteries is they suck," he said. "They're really horrible." 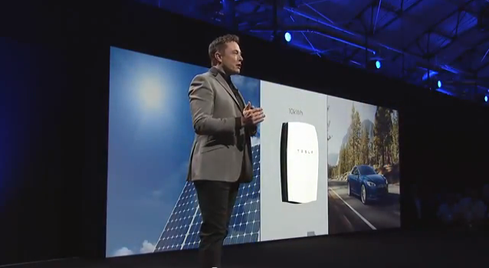 Companies such as Amazon and Target appeared to agree with that sentiment enough to test Tesla's take on the battery. In keeping with its commitment announced in November 2014 to move AWS to 100% renewable energy, Amazon has been working with Tesla over the past year to develop data center applications for high-capacity battery technology. And now Amazon has begun a 4.8 Mwh pilot of Tesla's energy storage batteries in its Northern California data centers.

"Batteries are important for both data center reliability and as enablers for the efficient application of renewable power," said James Hamilton, distinguished engineer at AWS, in a statement. "They help bridge the gap between intermittent production, from sources like wind, and the data center's constant power demands."

Target is also conducting a pilot test as part of its ongoing investment in sustainable buildings.

Whether or not Tesla's residential Powerwall battery makes financial sense for consumers depends on too many different factors to generalize about how long it would take for the investment to pay for itself.

If consumers are baffled by the mathematics involved in making a buying decision, they may be swayed by aesthetics. In contrast to the utilitarian look of other residential batteries, Musk described Powerwall, which comes in red, white, blue, grey, and black, as a work of art.

"It looks like a beautiful sculpture on the wall," said Musk.

Giulietti said she sees two primary risks. First is the possibility that the company's battery technology could be surpassed by something better. "In general a lot of research is still being done about the effective way to store powe,r and no technology has clearly emerged yet in terms of storage performance and affordability."

Second, she suggested that a lack of clarity about where battery technology is headed, and the fear of investing in a system that could become obsolete, will keep the majority of potential customers -- apart from early adopters -- from investing in energy storage.

In an April 23 research note, Global Equities Research analyst Trip Chowdhry estimated that the market for residential energy storage batteries amounts to about 20 million households worldwide presently, and that it has a potential value of about $200 billion.

Thomas Claburn has been writing about business and technology since 1996, for publications such as New Architect, PC Computing, InformationWeek, Salon, Wired, and Ziff Davis Smart Business. Before that, he worked in film and television, having earned a not particularly useful ... View Full Bio
We welcome your comments on this topic on our social media channels, or [contact us directly] with questions about the site.
Comment  |
Email This  |
Print  |
RSS
More Insights
Webcasts
Bolstering Your Enterprise Cyber Risk Assessment
The Experts Guide to Ransomware Response
More Webcasts
White Papers
Top Serverless Security Risks and How to Mitigate
Ransomware Security Breach Summary: Food Production
More White Papers
Reports
Future Proofing Your Network for 5G
The Need for Speed: Second Generation EDR
More Reports