As Shark Week celebrates its 25th year with jaw-filled images, a slew of new technologies drive both content production and distribution. 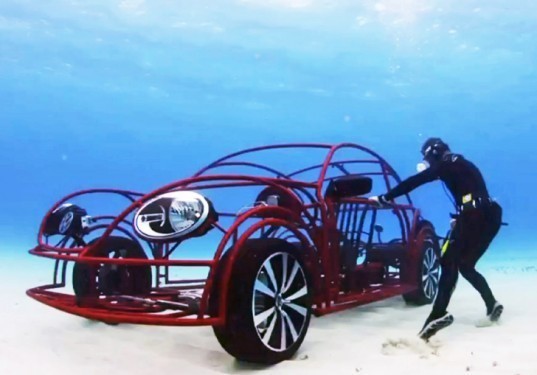 Mary Clare Baquet, creative director for branded entertainment at Discovery, said in an interview that she initially tried to "steer [Shark Week sponsor] VW] away" from planning on a Beetle-inspired shark cage that could actually cruise across the ocean floor like the 2012 redesign of the iconic vehicle cruises along highways.

"We were not sure it would work," she claimed, noting that she was delighted by the final cage, which was manned by marine biologist Luke Tipple.

Matt Katzive, an executive producer for branded entertainment, said in the same interview that they had only two weeks to build the Beetle and film the project, meaning that they basically had to produce the footage in true documentary fashion, without an assurance that everything would work out. Rough seas at the crew's Bahamas location complicated the task but Katzive said he was glad they made the effort.

The Beetle was custom built from aluminum pipes that had to be filled with water in order for the vehicle to submerge. To equip the cage for underwater driving, engineers included twin propellers and an on-board air propulsion system. The finished product was capable of traversing the underwater terrain with a two horsepower force. "Luke was like a kid in a candy shop," said Katzvive.

In keeping with the somewhat idiosyncratic identity that Shark Week has cultivated, the Beetle cage included rearview mirrors that read, "Sharks in mirror are closer than they appear."

Tablet Vs. Ultrabook: 10 Ways To Choose

I will have to say that the technology that is used to capture and study sharks has grown immensely anyone can see that when they watch the latest shark week. They have all the close ups of the shark and most of the time inside the sharks mouth. All these advances make for a way more interesting shark footage. I dig the creativity put into the punch bug shaped shark cage, and the message in the mirror. How many people watch or tape shark week on a yearly basis and look forward to it much like the Superbowl is anticipated?