Toshiba announced new Windows devices Tuesday that run the gamut from a $199 tablet to premium two-in-one hybrids aimed at professionals. The cheapest models run the recently announced Windows with Bing and foreshadow the flood of low-cost Windows 8.1 devices expected at next month's Computex tradeshow. The pricier models speak to device makers' attempts to refine their hybrid designs, most of which have failed to catch on so far.

Windows tablets were initially expensive but have grown more affordable over time. Toshiba's new eight-inch Encore 2 pushes that trend further. Equipped with the full version of Windows 8.1, including access to desktop apps, the tablet is slightly cheaper than Dell's Venue 8 Pro, which pushed Windows to lower prices and smaller screens when it launched last year. 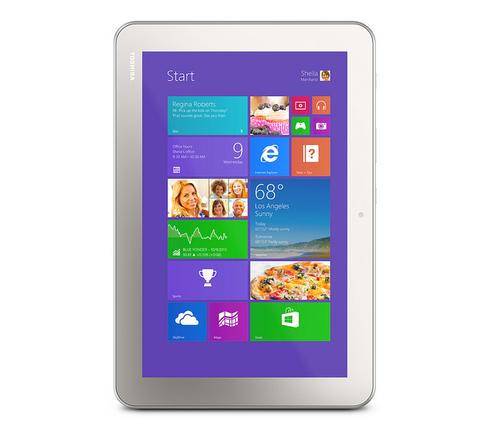 The Encore 2 is also available in a 10-inch model that adds not only more screen, but also an HDMI port. It starts at $269, although a model with twice as much RAM and storage will be available for $60 more. Toshiba will also offer a keyboard accessory for laptop use. The devices will be available in July and will include a one-year subscription to Office 365 Personal.

The Encore 2 runs Windows with Bing, which was announced this month. It requires OEMs to set Bing as Internet Explorer's default search engine and to bundle certain Microsoft services, such as promotional Office 365 subscriptions. In exchange for using this version of Windows, manufacturers get reduced, possibly even free, license fees. Microsoft presumably hopes to address competition from low-cost Android and Chrome devices and to replace license fees with services revenue. Users are free to change Internet Explorer's settings to another search engine.

This year, Microsoft announced that Windows licenses would be free on smartphones and tablets with screens smaller than nine inches. Windows with Bing gives OEMs more flexibility to offer devices with larger screens at budget prices. In a complementary move, Microsoft also recently relaxed its Windows hardware requirements, which now demand only 1 GB of RAM and 16 GB of internal storage.

Toshiba also announced several pricier devices. The Satellite Click 2 is a detachable two-in-one PC with a detachable 13.3-inch, 1,366 x 768-pixel screen and 500-GB hard drive. It runs on a quad-core Intel Pentium processor and will be available in late June for $586.99. 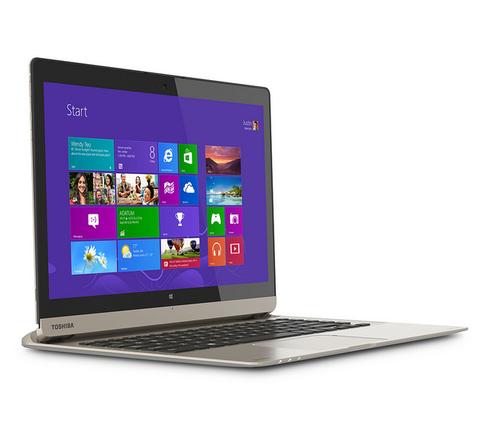 Intended for greater productivity needs and deeper wallets, the Satellite Click 2 Pro steps up to an Intel Core processor and offers up to 8 GB of RAM. Like the Satellite Click 2, the Pro model is a tablet that can snap on to a laptop base. It is only 0.78 inches thick when in laptop mode, and it boasts a full HD 13.3-inch screen; an SSD up to 256 GB; and Micro USB 2.0, Micro HDMI, and microSD slots. Its keyboard base includes two USB 3.0 ports and an HDMI port. The Satellite Click 2 Pro will be available in June for $1,028.99. Toshiba also will offer a version with a premium keyboard that will include a second battery and 500 GB of additional storage. That one will run $1,279.99.

Toshiba rounded out its Windows announcements with the Satellite Radius, a premium laptop with a 15.6-inch full-HD touchscreen, up to 8 GB of RAM, up to 1 TB of storage, and up to an i7 Intel Core processor. Its key feature is a flexible "flip-and-fold" design that allows the screen to be repositioned for different uses. 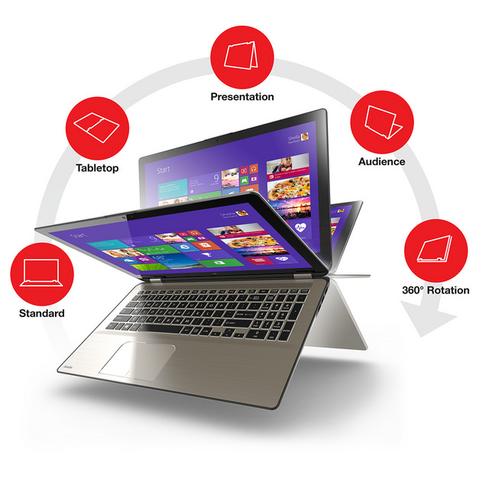 Touchscreen laptops haven't proved popular. Steve Jobs, among others, have argued that semi-horizontal touch input, such as one applies to a tablet, is natural, whereas vertical input, as clamshell designs generally encourage, is less appealing. Microsoft is currently looking to address this difficulty with the Surface Pro 3's flexible kickstand. Toshiba's new laptop is a different take on the same problem that broadly resembles Lenovo's Yoga line of touchscreen PCs.

The Satellite Radius will be available in July, starting in a Core i5 configuration for $925.99.

Michael Endler joined InformationWeek as an associate editor in 2012. He previously worked in talent representation in the entertainment industry, as a freelance copywriter and photojournalist, and as a teacher. Michael earned a BA in English from Stanford University in 2005 ... View Full Bio
We welcome your comments on this topic on our social media channels, or [contact us directly] with questions about the site.
Comment  |
Email This  |
Print  |
RSS
More Insights
Webcasts
What We Can Learn from Sports Analytics
ROI and Beyond for the Cloud
More Webcasts
White Papers
Improving Your Enterprise's Protection With Cyber Resilience
The Trouble with Phishing
More White Papers
Reports
The Malware Threat Landscape
Email Security Threat Report 2020
More Reports

I hear you! And I agree that screen time needs to be balanced with page time for kids who can read on their own. But for younger ones strapped into a carseat for a long drive, this offers an oppotunity to play Sesame Street or give them an educational game.
Reply  |  Post Message  |  Messages List  |  Start a Board

I know - wouldn't it be crazy if those kids had to - I don't know - read a book or something, without a screen?
Reply  |  Post Message  |  Messages List  |  Start a Board

A friend of mine asked me to shop around for a tablet at the $200 range. I believe the Encore 2 (8") is a real contender.

Probably is better to wait and check what other new tablets are coming, as Michael said. We'll see if they can beat the Encore 2 at this price, with a full version of Windows 8.1.

Unlikely tho. Specially considering that the Encore comes from a major brand, like Toshiba.


We'll have to see how the Encore 2 runs. If it's as zippy as Dell's 8-inch tablet, Toshiba might have a winner. Then again, a bunch of new tablets are coming in the next few weeks. Some even better cost-to-performance prospects could hit the market.

I'm not as impressed by the pricing on the upstream models. The Click 2 Pro seems a bit pricey considering the specs.
Reply  |  Post Message  |  Messages List  |  Start a Board

I think expansion slots are an underrated tablet feature - plenty of flights still lack wi-fi. At $199 and with the ability to bring along some movies on external SD drives, that will be tempting for parents facing long flights or car rides this summer.
Reply  |  Post Message  |  Messages List  |  Start a Board
Editors' Choice
Hot Topics