12 Open Educational Resources: From Khan to MIT
(click image for slideshow)
In the Arctic darkness, during a transformative year away from his work as an enterprise technology executive, Winston Chen began coding what became an empowering educational app for students with learning disabilities.

His Voice Dream Reader app for iPhone, iPad and iPod Touch reads books aloud, while simultaneously highlighting each word on the device's screen.

As a former CTO of the enterprise data management firm Kalido, Chen originally envisioned it as a tool for busy executives to read books and reports while driving or otherwise engaged. Instead, it has turned into one of the most popular assistive technology apps for the blind and partially blind and for students with many other disabilities that affect their ability to read independently.

"There is a large group of people out there for whom text-to-speech is life-changing," Chen said in an interview. "The quality has gotten really good over the last five years, but it's still not perfect. It turns out busy executives are far less tolerant of text-to-speech than someone who depends on it."

"For students who really need it, it is a game-changer," agreed Karen Janowski, an assistive technology specialist with a private practice in the Greater Boston area who works with the Newton Public Schools, and serves as an adjunct faculty member at Simmons College. "It highlights every word, so you can read it as well as get audio input, and you can change the font size, font choices, and color choices."

On an iPad, she explained, the app can go up to 70-point type fonts, which is enough to allow some students with low vision or visual processing difficulties to follow along with better reading comprehension.

Most importantly, the app has allowed students to read independently and take grade-level tests that require reading without being dependent on someone reading the material to them. For example, a 4th grader with cerebral palsy and other learning disabilities who previously couldn't read independently has been able to work his way up to reading a book or two a week, Janowski said. "He's so excited to be reading books that his friends are reading, and reading them on his own. That is empowering." Another student, an 18-year-old who was essentially a non-reader, was able to begin reading by making the text as large as the app would allow on an iPad screen and displaying only one line at a time to avoid distractions. 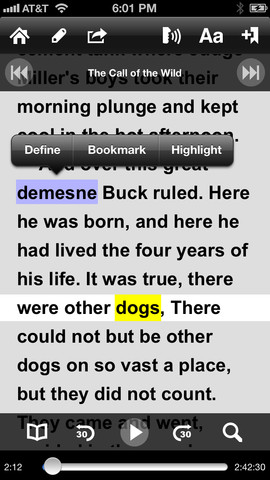 Voice Dream Reader highlights words as it reads them.

"Also, it's only $9.99, compared to some very expensive software programs that do similar things," Janowski said. "Can you tell I'm excited about this?"

The Voice Dream app is the byproduct of a sabbatical adventure Chen and his family took on an island north of Greenland and Iceland. As chronicled in a recent feature from Boston NPR station WBUR and on Chen's own Arctic Dream blog, the idea was to spend a year doing something completely different. While his wife, who is from Norway, taught school to the children of the island, Chen amused himself by blogging, painting, reading -- and coding.

"In the winter when it was dark outside, I needed something to do to keep myself occupied, so I decided I would go back to programming and write an app," Chen said. At first, teaching himself iOS programming was just a hobby, like learning oil painting. But once Dream Voice Reader made it into the iTunes App Store and began to garner strong positive feedback from people with disabilities, he got hooked on developing it to its true potential.

Running as a one-man operation for coding, product development, and customer support, Chen said he has translated the app into enough money to live off. "Plus, it's extremely gratifying work to know my product does something positive in people's lives rather than helping my company sell a few more widgets," he said.

Text-to-voice technology has a long history. The famed technologist Ray Kurzweil created an early reading software product in 1976, which in 1996 led to the founding of Kurzweil Educational Systems, a leading maker of reading software for PCs and Macs.

However, the Kurzweil software costs as much as $1,500 a seat, while some of the other PC-based text-to-speech products cost $50 to $70, Chen said. "We charge $10 for the app, plus $2 or $3 for a voice," he pointed out. He hasn't actually written his own text-to-speech software, instead taking advantage of commercially available software for mobile devices that is approaching commodity pricing, combined with his own user interface. Alternate voices for the app are sold separately.