Wearable Users Happy With Hardware, Less So With Apps - InformationWeek

Consumers express more approval for their wearable devices than they do for the apps associated with them. The gap suggests wearable makers should focus on creating software as compelling as their hardware.

Argus Insights analyzed more than 136,000 consumer reviews of wearable devices such as Fitbit, Jawbone, and other activity trackers from Nike, Microsoft, and Samsung, and of applications from November 2015 to February 2016. The company found that consumers were generally happier with their devices than they were with the apps used to interpret wearable data.

In the firm's report, "Examining the Wearables Ecosystem: Roadblocks in Personal Data Interpretation," chief analyst Makenna Breitenfeld argues that the gap between the way people feel about their wearable devices and the associated apps underscores industry uncertainty about how wearable data can actually be useful.

"Wearables are aspirational devices, especially when being used for fitness and personal health," said Breitenfeld. "They do a wonderful job of collecting data. But without interpretation of this data to inspire action and promote change, the devices become dispensable."

Wearables must answer the same question big data is facing: Now what?

"Just because you have the data doesn't mean you can take action," said John Feland, CEO of Argus Insights, in a phone interview. 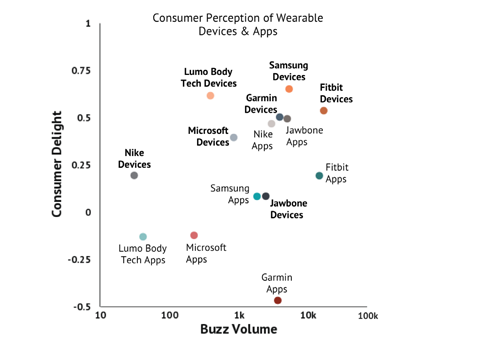 Practically every company focused on data promises to translate facts and figures into actionable business intelligence. But that's easier to say than to do. Feland said he saw the same issue in the Air Force intelligence community, where lots of time was spent collecting data, but not enough time was spent on analysis.

"The assumption is that once we have all the data, we can figure out the answer," said Feland. "Unfortunately, that's not the way it works."

Many device-makers, Feland said, started with the technology and haven't adequately considered user experience. "A lot of it comes down to the fact that you can't separate the design of the hardware from the software," he said. "That's one thing Apple has gotten right for years."

The report didn't include the Apple Watch or other smartwatches because they're application platforms with a variety of apps, Feland explained. Instead, it is focused on wearables with a dedicated app like those from Fitbit, Garmin, Jawbone, Lumo Bodytech, Microsoft, Nike, and Samsung.

"Unfortunately, a lot of the companies are using the blind squirrel innovation strategy," said Feland. "They're digging around to find something that works."

Feland remarked that both the Nike and Jawbone apps scored well compared to apps from Fitbit, Samsung, and others. So compelling app design is possible. The report says that the Jawbone Up app is particularly appreciated due to its ability to turn data into a recommended plan of action.

"A lot of us will have smartwatches on our wrists but will also have other things around us," said Feland. "We need a way to bring all the data together, instead of everyone trying to mimic the walled garden strategy."

Thomas Claburn has been writing about business and technology since 1996, for publications such as New Architect, PC Computing, InformationWeek, Salon, Wired, and Ziff Davis Smart Business. Before that, he worked in film and television, having earned a not particularly useful ... View Full Bio
We welcome your comments on this topic on our social media channels, or [contact us directly] with questions about the site.
Comment  |
Email This  |
Print  |
RSS
More Insights
Webcasts
Key technology trends in 2021 - Making these technologies work for your business
Cybersecurity's Next Wave: What You Should Know
More Webcasts
White Papers
Why Add Security to Your Skill Set and How to Do It
Sunburst: Impact and Timeline
More White Papers
Reports
Key Strategies for Managing New Risks in Cybersecurity
How IT Security Organizations are Attacking the Cybersecurity Problem
More Reports

These findings aren't all that surprising. Existing hardware seems pretty reliable - I have wondered what the app experience was like. It seems wearables are closer kin to the car infotainment system than other devices. I hope the UX improves rapidly.
Reply  |  Post Message  |  Messages List  |  Start a Board
Editors' Choice
Hot Topics