20 Top Masters Degrees For Big Data Analytics Professionals
(click image for larger view and for slideshow)
There's a classroom in San Francisco designed to make students pay such close attention to the lecturer in front of them that they will forget he isn't really there.

On Monday, Cisco and the Wharton School of Business at the University of Pennsylvania unveiled what they're calling the learning experience of the future, a classroom featuring a large screen that drops down from the ceiling and reaches the floor, combined with video projectors capable of replicating the front of the classroom from a mirror-image auditorium on the other side of the country.

Combined with other displays on the side of the room and in the back, this setup should allow a professor in Wharton's MBA program to teach his class as he normally would, but with his audience split between the school's main campus in Philadelphia and a second campus in San Francisco. A lecturer in either Philadelphia or San Francisco can move naturally around the front of the class and look out to see an audience that includes the students sitting in front of him and the remote students visible on the screens at the back of the classroom, as if they were at another bank of desks.

"You push a button, and then you can just teach your class like you would without telepresence, except with an extra three rows at the back," said Karl Ulrich, vice dean of innovation at Wharton and a professor of operations and innovation management. For the students, "the illusion is created by projecting the instructor approximately life size, as if he was standing in front of you," Ulrich said. To preserve that illusion, instructors need only follow a few basic ground rules like restricting their movement to an area at the front of the class delineated by carpet tiles -- go past the first two tiles, and the camera will cut off your ankles -- but these amount to "minor tweaks in behavior," he said.

The video classroom design was specifically aimed at classroom technology skeptics, said Inder Sidhu, senior VP of strategy and planning for worldwide operations at Cisco. "Professors can sometimes be very finicky, but that's because their greatness is driven off of teaching in a given way. So we had to think through 'how can we be minimally intrusive in the use of this technology,'" he said. 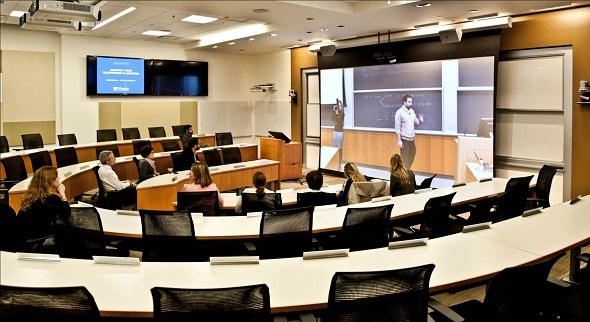 A San Francisco class attends a lecture from Philadelphia, with the lecturer's image projected on a life-size screen.

[ What should Cisco do? Read Cisco Customers Discuss Its Future.]

"The idea we had, going back almost a year ago, was that we could do for education what we've done for meetings," Sidhu said. Cisco telepresence systems designed for corporate meetings aim for a simplicity that allows executives to sit down at a meeting table and conduct a meeting as they normally would, with remote participants interacting almost as if they were at the other end of the table, he said. Part of the secret to the success of those systems is they require "no change in behavior," and the system showcased at Wharton is intended to do the same thing for university lecturers -- who don't normally teach seated at a desk or a meeting table, he said. "We had many, many meetings to plan this, not just with the IT guys but with the regular professors, and what they told us is, this should enhance rather than replace what I do, and it should be non-intrusive."

The use of videoconferencing to link classroom locations is not new, but the use of a floor-to-ceiling projection system in the front of the class is. "To our knowledge, this is the first time anyone has done that," Sidhu said.

Wharton had experimented with offering a remote course between campuses using conventional videoconferencing equipment and "students were pretty clear that wasn't an acceptable educational experience," Ulrich said. Given that Wharton charges a premium based on quality (students pay more than $200,000 for a two-year MBA program), they have a right to their high expectations, he said.

The system constructed with Cisco's help is good enough to "cause you to suspend disbelief because it feels like someone is standing there in front of you," Ulrich said. Still, is it as good as being there? Not quite.

The way the two-campus program works now is that key professors are routinely flown from one location to the other to give two days of lectures on an every-other week basis. It's not Wharton's goal to use telepresence to cut down on that travel, Ulrich said. Instead, it might provide an opportunity to squeeze in an additional lecture without the need for travel. There are also specialized courses such as Mathematical Models in Finance that Wharton might be able to offer more frequently if the number of interested students at each campus could be combined to take the course simultaneously. "I think the way to do that would be to have the instructor alternate locations physically," he said, so that neither group of students feels shortchanged in its interaction with the professor by only seeing him lecture over the video link.

In addition, the telepresence system makes perfect sense as a way of bringing in a guest speaker whom students otherwise would not be exposed to at all, Ulrich said. That's particularly true of Silicon Valley executives who can take time to visit the San Francisco campus but wouldn't necessarily make time for a trip to Philadelphia, he said.

Many of the possible scenarios for use of the two-classroom setup have yet to be proven in practice, although Ulrich was preparing to demonstrate them at an official unveiling event on Monday.

Cisco made claims about 1-click simplicity, although I'm not sure how far to trust that. If I remember right, Dean Ulrich said it was pretty simple to press a button and have all the screens drop into place and the video initiated between two mirrored classrooms. If you were bringing in guest speakers from multiple locations and maybe non-Cisco equipment, presumably things would get more complicated fast.
Reply  |  Post Message  |  Messages List  |  Start a Board
InformationWeek Is Getting an Upgrade!