Where Are All The Chromebooks? - InformationWeek

By many accounts, Chromebooks are flying off store shelves. But wherever they're landing, they're doing so without leaving tracks. Online usage of Chrome OS hardware on the Internet still barely registers with those measuring Web traffic.

There's little doubt outside of Microsoft -- which insists Chromebooks are not real PCs -- that the Chrome operating system had a breakout year in 2013. After a slow start in 2011, Chromebooks now account for 21% of notebook computers sold in the US, according to NPD Group. Two in three of the best-selling laptops on Amazon during the 2013 holiday season were Chromebooks. Google's Chromebook hardware partners now include eight of the top computer makers in the world.

That represents a doubling of Chrome OS traffic in September 2013, when Chitika's study began. But in the overall scheme of things, Chromebook-generated Web traffic remains insignificant. Chrome OS Web traffic is about a tenth of desktop Linux Web traffic in North America.

Chitika notes that although Linux has always been considered a niche product on the desktop, Google's marketing efforts point to grand ambitions for Chrome OS. The company suggests that the modest growth of Chrome OS highlights the domestic PC market slowdown.

"[T]his could mean that either those new Chrome OS users don't collectively browse the Web all that much using their device, or that the Chromebooks/Chromeboxes themselves are not collectively being used at a high rate in general," said Chitika analyst Andrew Waber in an email. 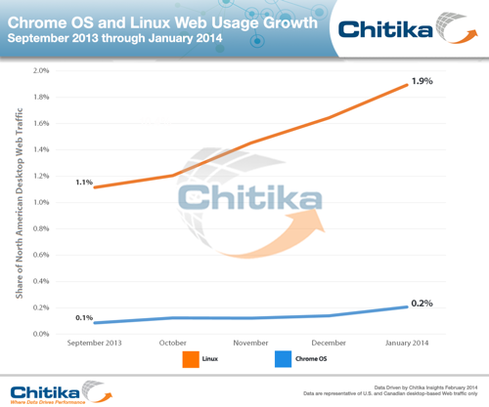 Judging Chrome OS by use of hardware risks missing the larger picture. Web usage offers only limited insight into the significance of a market. Apple's iOS still accounts for more Web usage than Android, but the days when that suggested Android could not complete are long gone.

What's more, Chromebooks are only part of the Google landscape. The Chrome browser really should be included, too, because the Chrome operating system doesn't offer any software that isn't also available in Google's browser.

Perhaps the best way to measure the success of Chromebooks is to look at Microsoft's reaction. When Chromebooks debuted, Microsoft ignored them. Now they're being trashed in Microsoft's marketing. Clearly, Microsoft thinks they matter. In time, Chromebooks will show up more prominently in Web traffic graphs.

Thomas Claburn has been writing about business and technology since 1996, for publications such as New Architect, PC Computing, InformationWeek, Salon, Wired, and Ziff Davis Smart Business. Before that, he worked in film and television, having earned a not particularly useful ... View Full Bio
We welcome your comments on this topic on our social media channels, or [contact us directly] with questions about the site.
Comment  |
Email This  |
Print  |
RSS
More Insights
Webcasts
Unifying Your Endpoint Security Strategy
Fact or Fiction? The Truth About Cloud Native Security
More Webcasts
White Papers
Case Study: What Elite Threat Hunters See That Others Miss
How to Build Your Incident Response Plan
More White Papers
Reports
CVE Weaponization Report
The State of Malware Threats
More Reports

I second your question, Paul. How can you use a Chromebook and not go online. WHat am I missing?
Reply  |  Post Message  |  Messages List  |  Start a Board

>Could it be Chromebooks are purchased for use with Google Search and Google Apps, while on the move, and their owners continue using phones and laptops most of the time?

Among power users that seems to be the case. Chromebooks seem to be popular among those traveling to security conferences. I suspect those devices purchased for educational institutions are used for web surfing less often than personal or business devices, and that may contribute to the low traffic numbers of Chrome OS.
Reply  |  Post Message  |  Messages List  |  Start a Board

One place where Chromebooks are showing up is in education. The Wall Street Journal reported in January that Chromebooks grabbed nearly a fifth of U.S. K-12 purchases of mobile computers last year.
Reply  |  Post Message  |  Messages List  |  Start a Board

Good commentary, Tom. You may be right, but there's still scant proof Chromebooks will one day amount to a sizeable segment of Web traffic. Right now, that's more intuition than fact. Could it be Chromebooks are purchased for use with Google Search and Google Apps, while on the move, and their owners continue using phones and laptops most of the time?
Reply  |  Post Message  |  Messages List  |  Start a Board
InformationWeek Is Getting an Upgrade!