Why Android Fragmentation Is A Good Thing - InformationWeek

A recent report talks about the "fragmented" Android market. We think "diverse" is a more accurate word to describe the state of affairs. Here's why that's a good thing.

10 Pricey iPhone Apps That Will Leave You Broke
(Click image for larger view and slideshow.)

Google Android operating system is often described as "fragmented." And generally, that's characterized as a problem. It can be problem, but it can also be beneficial.

The word "fragmented" implies an idealized whole that has been broken into pieces. It is pejorative because it suggests that centralization and unification represent the preferred state.

A better term would be "diverse." We do not say humanity is fragmented. We are racially, ethnically, ideologically, physically, and intellectually diverse. That can be a problem for us, but it's also our strength. We are not a monoculture. We should not expect our phones, or the code that runs them, to conform to a single standard.

[ Who's really winning the smartphone game? Read iPhone Vs. Android: Apple's Success Only Goes So Far. ]

Android devices, for better or worse, are diverse. In its recent Android survey, app maker and network data collector OpenSignal reported being able to identify 24,093 distinct Android devices as of August 2015, up from 18,796 Android devices seen last year. Of the 682,000 devices surveyed, the largest portion (37.8%) were made by Samsung.

"Fragmentation is both a strength and weakness of the Android ecosystem, a headache for developers that also provides the basis for Android's global reach," said OpenSignal in its report, without recognizing the bias inherent in the term. 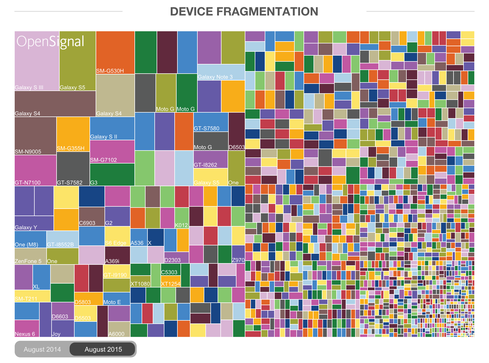 Apple executives have made it a habit to emphasize the downside of Android's diversity. At Apple's Worldwide Developer Conference in June, Craig Federighi said that 83% of active iPhone users are currently running the latest OS. "This is really important because it means not only are they getting the most recent features, but they're also up to date on all the security fixes, and you're able to know as a developer that you can target all the users with the latest and greatest APIs," he said. "And this is a benefit that actually remains really unique to iOS."

The fact that only 18.1% of Android phones presently run Android 5.0 or higher does present issues for Google, its partners, and developers, both in terms of delaying access to new Android features and in terms of security, particularly for Android devices running outdated software with known vulnerabilities.

But the blame for the low adoption rate of Android updates belongs with the Android ecosystem, with handset makers and mobile carriers that prioritize money – by foregoing the cost of update testing and distribution – over customer convenience, satisfaction, and security.

Having tried to deal with the slow pace of updates through the Open Handset Alliance, Google on Wednesday took a step further with the announcement that its Nexus devices will receive regular over-the-air security updates every month, in addition to platform updates. And Samsung has committed to a similar security patch schedule. Diversity doesn't preclude some form of oversight.

At the same time, Apple's centralized approach, for all the real benefits it offers, hasn't conferred immunity from security issues. In June, an iOS vulnerability surfaced. Patched in iOS 8.4, it could have allowed the loading of malicious HTML code in an email accessed through Apple's Mail app. Meanwhile, security firm FireEye is reporting that the "Masque attack" against iOS devices has been detected in the wild. And Patrick Wardle, a security researcher at Synack, recently demonstrated vulnerabilities in OS X at the Black Hat conference.

One of the problems with Apple's monoculture is that a security vulnerability in the latest operating system release has the potential to affect a greater percentage of the user base than it would on Android. Apple has all its eggs in one basket. There's also the petty paternalism of requiring that developers seek approval for app content, rather than simply auditing code for security and privacy issues and accepting that code authors deserve the same speech protection as text authors. But that's another story.

Android developers have to deal with more screen sizes and device variations than iOS developers, but these are manageable challenges, at least compared to the wealth gap between iOS and Android users and Android's longstanding audio latency problem.

In an email, a Google spokesperson said that while the company built Android as an open platform to promote manufacturer differentiation and device innovation, it continues to look for ways to ensure consistency through Google Play Services APIs and Material Design libraries and guidelines.

In May, Google offered a preview of its forthcoming Cloud Test Lab, which will allow developers to automate the testing of their mobile apps on a variety of virtual hardware configurations (as Amazon Device Farm and Amazon App Testing Service do). "It's currently not available publicly, but we expect it to help significantly reduce the challenges of fragmentation on Android devices," Google's spokesperson said.

Google is trying to pick up the pieces and fuse Android's fragments together into a more manageable amalgam. Maybe it will work this time. In the meantime, at least there's no shortage of choices.

Thomas Claburn has been writing about business and technology since 1996, for publications such as New Architect, PC Computing, InformationWeek, Salon, Wired, and Ziff Davis Smart Business. Before that, he worked in film and television, having earned a not particularly useful ... View Full Bio
We welcome your comments on this topic on our social media channels, or [contact us directly] with questions about the site.
Comment  |
Email This  |
Print  |
RSS
More Insights
Webcasts
Bolstering Your Enterprise Cyber Risk Assessment
Disaster Recovery/Business Continuity in the New Normal
More Webcasts
White Papers
Guide to Enabling 5G Deployments
Top Serverless Security Risks and How to Mitigate
More White Papers
Reports
2021 Digital Transformation Report
2021 Application Security Statistics Report Vol.2
More Reports