Microsoft's Surface tablets are bucking overall market trends by meeting enterprise needs, even as Apple iPad and Google Android-based tablets continue to fight for market share. Here's why CIOs and other IT leaders are embracing the Microsoft mobile devices.

Microsoft is bucking the tablet market's megatrends. The halcyon days of the tablet market faded fast, and businesses never found tablets to be a good fit. Yet sales of Windows tablets skyrocketed recently, mainly because the devices include features that interest CIOs.

Tablets are not a hot commodity at the moment. In second quarter 2015, sales of these devices increased only 2% from the first quarter, according to market research firm Strategy Analytics.

Even though tablets initially were viewed as cool by consumers, they never garnered significant traction in the enterprise. "The small surface and the lack of a keyboard have been a few reasons why business users have been slow to adopt tablets," said Jitesh Ubrani, senior research analyst at IDC.

In addition, employees often found that tablets did not support the applications they use at work. In a chicken-and-egg scenario, the established software vendors did not see much demand for mobile versions of their applications because few enterprises worked with tablets. Because few business applications were available, firms turned their backs on the mobile systems. Consequently, corporate acceptance of tablets has been limited to a few niches such as inputting healthcare information in medical systems and video editing.

[ Are tablets actually helping PC sales? Read 8 Reasons The PC Is Not Dead. ]

Recently, Microsoft emerged as an important player in the enterprise tablet market with the Surface and Surface Pro, and the company has been reshaping CIO perceptions about tablets in the process. In second quarter 2015, the vendor accounted for 10% of all tablet sales -- breaking into the double-digit mark in terms of shipments for the first time. "Strong sales of Microsoft's Surface -- up 42% from the first quarter in 2015 -- sparked Windows tablets' second-quarter growth," said Phil Hochmuth, director of mobile workforce strategies research at Strategy Analytics.

Digging Below The Surface

So why are Windows Surface tablets doing so well in such a lackluster market? Unlike competitive solutions such as iPad and Android-based tablets from vendors such as Asus and Samsung, Windows tablets are largely compatible with existing enterprise applications. This helps make them a good fit for business users. Running applications, including Microsoft Excel or PowerPoint, on a Windows tablet is easier and more efficient than trying it on other systems. 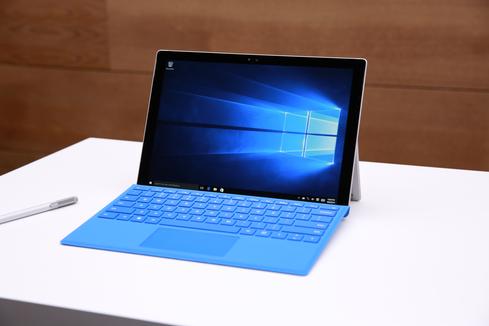 Another plus is the delivery of the Windows 10 operating system. "Windows 8 did not work well with mobile devices," said IDC's Ubrani. "Windows 10 is more mobile-device friendly."

One example is the system's Continuum feature, which tailors applications to different platforms. If a user relies on a tablet, then touch input is emphasized. If an employee works with a keyboard, then keyboard input is front and center.

Also, Microsoft tablets have been tuned to work well with mobile-device management software. This feature enables IT departments to manage these devices more easily than in the past.

Finally, the vendor did a good job designing the Surface. "Microsoft has positioned its tablets as PC replacements," said Strategy Analytics' Hochmuth. For example, the Surface 2-in-1 functions enable workers to swap out their laptop or desktop PC for a tablet.

The end result is a number of companies are standardizing on the devices. Liberty Mutual Insurance Group and the University of Pittsburgh Medical Center have each purchased more than 1,000 Surface tablets for use by their employees.

While making headway, Microsoft faces a number of hurdles in the enterprise tablet market. Redmond has been working with Apple and Google, so business applications such as Microsoft Office run on competitors' mobile devices, thus diminishing one attractive Surface feature.

In addition, rivals have been improving their enterprise stories. Apple teamed with IBM to deliver and support mobile enterprise solutions. Google partnered with RSA to enhance Android security, a longstanding bugaboo.

Also, the Microsoft systems are expensive. While some tablets are available for as little as a few hundred dollars, Surface pricing ranges from about $500 to more than $1,000.

Still, Windows tablets have been bucking industry trends. Because of the devices' functionality and integration with enterprise systems, CIOs have been buying more of these systems and making them the most vibrant element in a dull market.

Paul Korzeniowski is a freelance contributor to InformationWeek who has been examining IT issues for more than two decades. During his career, he has had more than 10,000 articles and 1 million words published. His work has appeared in the Boston Herald, Business 2.0, ... View Full Bio
We welcome your comments on this topic on our social media channels, or [contact us directly] with questions about the site.
Comment  |
Email This  |
Print  |
RSS
More Insights
Webcasts
Bolstering Your Enterprise Cyber Risk Assessment
Monitoring Critical Cloud Workloads
More Webcasts
White Papers
Top Serverless Security Risks and How to Mitigate
Ransomware Security Breach Summary: Food Production
More White Papers
Reports
Dark Reading Report: Battle for the Endpoint
Trustwave Global Security Report
More Reports