Chinese phone maker Xiaomi made a big splash in Barcelona Feb. 24 with the Mi 5, a metal-and-glass handset that costs half as much as the competition. The company is targeting Apple's iPhone and Samsung's Galaxy lineup with this low-cost smartphone.

BARCELONA -- Xiaomi announced the Mi 5 smartphone at the Mobile World Congress show here Wednesday, a handset that reveals just how serious the Chinese company is at competing with market leaders Apple and Samsung. The Mi 5 is a shining example of how to make attractive yet low-cost smartphones that will sell in big numbers.

You might not know it, but Xiaomi is the world's fifth-largest maker of smartphones. The company shipped more than 18.3 million devices during the fourth quarter of 2015, putting it just behind Lenovo's 20 million devices. Handsets like the Mi 5 might help push Xiaomi ahead of Lenovo in the months ahead.

The phone is crafted from metal and glass.

Its design evokes that of the Samsung Galaxy Note. It's incredibly slim at 5.12mm thick and features contoured glass to provide the design with some character. A high-end variant of the phone, called the Mi5 Pro, will include a ceramic rear panel, instead of glass. The display measures 5.15 inches and has full HD resolution. The screen doesn't go head-to-head with the quad HD display of the Samsung Galaxy S7 or the LG G5, but it's still an impressive display. 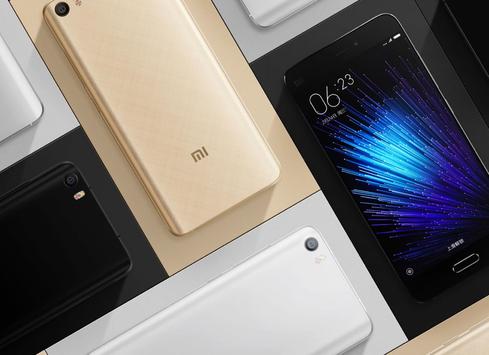 Xiaomi picked Qualcomm's Snapdragon 820 processor to serve as the Mi 5's engine. All versions of the phone will have 4GB of RAM, but the processor will be clocked at 2.15 GHz for the 64GB and 128GB models, and 1.8 GHz for the 32GB model. Xiaomi didn't explain why the Mi 5 will use two different clock speeds.

The company selected Sony's IMX298 imaging sensor, which boasts 16 megapixels and 4-axis optical imaging stabilization. The OIS should help the Mi 5 take sharper photos, since it will be able to mitigate handshake and movement while snapping pictures. The front camera can take 4-megapixel images.

Other specs include a 3,000 mAh battery that supports Qualcomm's Quick Charge 3.0, USB Type-C for charging and data transfer, and of course Bluetooth, GPS, NFC, and WiFi radios.

[Check out this comparison of the Galaxy S7 and the G5.]

The Mi 5 will run Android 6.0 Marshmallow with Xiaomi's MIUI 7 user interface. MIUI 7 is a bit heavy-handed. It replaces many of the icons, fonts, and menu behaviors of the operating system, but it is still usable.

The smartphone hits Chinese retailers March 1 and will quickly follow in India. Xiaomi said it will bring the phone to more markets in the months ahead.