Chip technology from Intel and Micron combines the best qualities of DRAM and solid state memory. It may lead to big changes in mobile and data center operations.

Micron and Intel have produced memory chips based on a new three-dimensional cross-point technology that will improve the density of memory for close-to-the-CPU processing, such as in-memory database operation. It improves on the speed of the typical solid state device.

Brian Shirley, Micron's VP of memory technology and solutions, said in an interview that NAND -- or non-volatile solid state drives -- have achieved great memory densities, but the data on them must be accessed in blocks, a slower process than being available over a random-access bus.

Likewise, the volatile DRAM used for internal server memory has achieved great speed of access, but has been limited in the amount of capacity it can provide on a single chip. Intel and Micron's 3D XPoint technology moves away from a memory chip architecture based on transistors, and combines speed of access with three-dimensional memory circuits yielding high density. Like NAND, 3D XPoint is non-volatile, with data remaining in place after the power is shut off.

3D XPoint is 1,000 times faster than the non-volatile memory found in solid state devices, and 10 times as dense as DRAM memory occupying the same amount of space, the two chip makers claimed in a statement on Tuesday. "It fills the gap. It combines the best of both DRAM and NAND solid state aspects," Shirley said from his office in Boise, Idaho.

[No one predicted this. See what 2015 predictions for memory foretold. Read: 2015 Storge Industry Outlook.]

Shirley acknowledged that memory breakthrough announcements are made each year, often representing merely theoretical advances or achievements in a lab that may never be mass produced in the factory. "There are a lot of PowerPoint presentations out there," Shirley conceded. But, he added, "Intel and Micron are talking about a technology that is in a production fab right now." 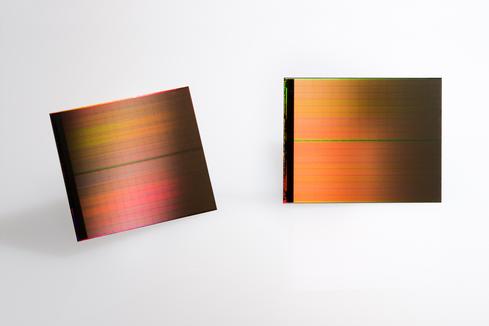 The two firms are manufacturing their first 3D XPoint chips in a Micron NAND fabrication plant in Lehigh, Idaho. XPoint memory products will be available from the two firms in 2016, Shirley said. If so, then they are likely to usher in a new era of more powerful database servers, big data analytics applications, and mobile devices.

Shirley said the chips' design gets away from transistor-based memory, and substitutes "interleaved rows of memory lines [circuits] that makes use of "a new combination of materials" that Intel and Micron declined to define in detail. "The net is a simple structure which we can manufacture, and which enables the high-memory density," sais Shirley. "And the exciting thing is that it has quite a bit of scalability still in front of it."

Manufacturers have found it increasingly difficult to shrink memory circuits and pack memory cells with sufficient electrons to produce highly reliable memory chip function. The 3D XPoint approach claims to do just that, with a series of scalability improvements still to come.

"Part of the magic of this technology is that the memory cells and memory arrays use very simple structures. They don't rely on transistors," said Shirley. Both Intel and Micron expect them to be manufacturable on a reliable, high-yield basis. They're using what is currently a NAND wafer plant in Lehigh for their pilot production line.

According to Shirley, the size of the memory cells can continue to shrink on the chips, in part, because it is "not a charge-based data storage approach. We are actually changing the atoms in the memory cell" as the basis for data retention without charge.

"It's a different mechanism. It gives us the high densities with the higher speeds as well," he said.

Charles Babcock is an editor-at-large for InformationWeek and author of Management Strategies for the Cloud Revolution, a McGraw-Hill book. He is the former editor-in-chief of Digital News, former software editor of Computerworld and former technology editor of Interactive ... View Full Bio
We welcome your comments on this topic on our social media channels, or [contact us directly] with questions about the site.
Comment  |
Email This  |
Print  |
RSS
More Insights
Webcasts
People Are The Most Important Part of Autonomous SOC
Cybersecurity's Next Wave: What You Should Know
More Webcasts
White Papers
Why Add Security to Your Skill Set and How to Do It
Balancing Hybrid Storage as Part of a Hybrid Cloud Data Management Strategy
More White Papers
Reports
Protection Strategies for a Cyber-Resilient Organization
Are Unprotected Cloud Databases Leaking Your Data?
More Reports

Tzubair, NAND Flash memory at one time was known to be able to support 5,000 reliable writes and rewrites. 3D XPoint supposedly has 1,000 times the endurance of Flash, according to joint Micron/Intel information.
Reply  |  Post Message  |  Messages List  |  Start a Board

"the size of the memory cells can continue to shrink on the chips, in part, because it is "not a charge-based data storage approach. We are actually changing the atoms in the memory cell" as the basis for data retention without charge"

I think that presents with a very unique approach towards storage. Eliminating the "charge-based data storage approach" and using atoms instead will not only save a lot of space it should make it possible to also have storage that works without power and can be read and written without the need for an electronic connection.
Reply  |  Post Message  |  Messages List  |  Start a Board

"I have a problem with the caching of the data in memory even after powering down. This is an inherent security risk I would rather not have to deal with"

@asksqn: I don't think that's a big risk. You have tons of data in the disk drive which is encrypted for security. Only a fraction resides in the memory that gets cleared upon power down. As long as there's proper encryption, I don't think there's a big security lapse involved here.
Reply  |  Post Message  |  Messages List  |  Start a Board

" It can also be written to and rewritten to many more times than solid state components can."

@Charlie: Any idea about its life in terms of the time duration for which it can be used for on avearage? Apart from the use, the time itself should also matter so that the ufront cost can be aportioned accordingly.
Reply  |  Post Message  |  Messages List  |  Start a Board

While speed is nice, I have a problem with the caching of the data in memory even after powering down. This is an inherent security risk I would rather not have to deal with.  In fact, I predict security researchers to point out this glaring security hole and XPoint, like all tech manufacturers, attempt to silence that research using the standard bludgeoning tool - the DMCA- to silence any research it does not like.
Reply  |  Post Message  |  Messages List  |  Start a Board

3D XPoint is a new memory technology that, if it lives up to its p;romise, will make it easier to equip small devices with much greater memory capacity. It can also be written to and rewritten to many more times than solid state components can.
Reply  |  Post Message  |  Messages List  |  Start a Board
Editors' Choice
Hot Topics