An iPad might or might not be the right choice in 2025, but in 2012 it made sense as a computing platform with a large variety of applications available. Critically for NEEMO 16, Reagan found an iPad app that simulated the "voice loop" used for radio communications between mission control and the spacecraft--the system for managing multiple conversations by different mission specialists, all going on simultaneously. The crew and mission control personnel used the iPad software, in combination with headsets, to talk to each other. All communications were fed through a communications delay emulator, a "black box" that spooled transmissions between the crew and mission control before letting them go through.

The NEEMO crew also experimented with texting as an alternative to audio communications, figuring that the time delay for replies might feel more natural in that medium. Because they couldn't find an iPad-based texting program that was compatible with their signal delay emulator, they used laptops for that portion of the experiment.

The planned asteroid rendezvous would require traveling about one-tenth of the distance between the Earth and the Sun, far enough that radio transmissions would take 50 seconds, one way. That's enough to interfere with normal conversation, particularly a technical conversation where it might be helpful to ask for clarifications. "You're looking at 1 minute, 40 seconds, best case, before any question can be answered," Reagan explained.

In other words, it helps a lot if you can make your initial communication as clear as possible.

"We know from 40-plus years of human space flight experience that we're not going to be able to train a crew on every single thing they might have to do on a space mission," Reagan said. "On a long mission, you're going to have to do things you weren't trained on specifically. The classic example is maintenance, where something needs to be repaired or replaced." That is, you could spend the rest of your life training in electronics and machine shop techniques and not cover every contingency, he said. 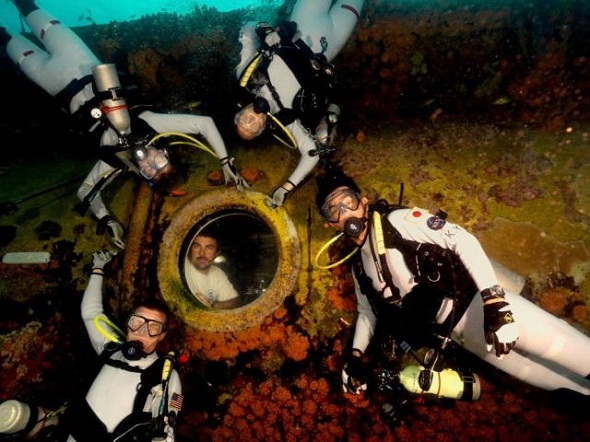 The crew gathers in front of the hatch to the Aquarius undersea laboratory at the start of the NEEMO 16 mission. (Photo courtesy NASA, Credit: Mark Widick)

"If you think about what you do in your own life, if you have a problem with your car, the first thing you might do is go to YouTube, and some kind soul might have posted a video showing how to fix it," Reagan said.

More to the point, think of the scene from the Ron Howard movie "Apollo 13," dramatizing the life-or-death challenge of saving the astronauts from suffocation because their air was running out. This is after Tom Hanks, in the role of astronaut Jim Lovell, delivers the movie tagline about trouble on board, and after the crew has retreated from the damaged command module, using the Lunar lander as a lifeboat. Because the lander was designed to support two astronauts, not three, engineers on the ground had to improvise a procedure to "make a square peg fit in a round hole" so the carbon dioxide scrubbing filters from one spacecraft would work with the life support system of the other. They pulled it off on the basis of radioed instructions from the ground, from which the astronauts made handwritten notes about what to do, in what order.

"That's exactly the kind of thing that was in the back of my mind when we were working on this," Reagan admitted. "That's the extreme case, the limiting case, of what we're trying to learn to do better."

And some duct tape.

The repair of the ISS power system recently used improvised tools to accomplish the task. There may not be any mission that didn't require some improvising.
Reply  |  Post Message  |  Messages List  |  Start a Board
Editors' Choice
Hot Topics