NASA Curiosity Visual Tour: Mars, Revealed
(click image for larger view and for slideshow)
"Houston, we have a problem. Think you can rustle up a quick PowerPoint on how to solve it?"

NASA put men on the moon and successfully addressed near-disasters such as the explosion aboard the Apollo 13 command module with vastly less computing power than you can carry in your pocket these days. The next time astronauts visit a virgin world, they might carry iPads, as did those training in an underwater habitat this summer for project NASA Extreme Environment Mission Operations (NEEMO). The exercise took place at the Aquarius Reef Base undersea research habitat off the coast of Key Largo, 63 feet below the surface, which provides a rough analog for the harsh environment and zero gravity environment of a space mission.

A big part of June's NEEMO 16 mission was practicing collaboration and just-in-time training techniques for a deep-space mission, where the speed of light is a significant obstacle to communication. The iPad "was actually one of the key technologies that allowed us to do a mission as complicated as we did," NEEMO mission director Marc Reagan said.

As a condition of the interview, I promised to make it clear that the National Aeronautics and Space Administration is not in the business of endorsing specific products. However, NASA is actively seeking to take advantage of consumer technologies where practical, Reagan said. Because consumer products and applications benefit from lots of development dollars and practical testing by thousands of users, "that's always going to be a better solution than a custom built application, if you can find one that does what you need to do," he said.

[ Read about iPads in a more down-to-earth environment: iPads In Factories: Early Lessons From GE. ]

The use of iPads on a space mission is not at all far-fetched. In fact, they ought to turn up aboard the International Space Station by the end of the year. "I think they're scheduled to go up on a launch in October," said Brandi Dean of NASA public affairs.

Reagan cautioned that commercial technologies must go through a far more rigorous screening process before they are allowed to fly in space. On a simulated mission like NEEMO, it's relatively easy to approve a device for use based on little more than the same Underwriters Laboratory certification you'd expect for a household appliance, he said.

For NEEMO 16, the Apple tablet computer was used to simulate time-delayed radio communication, organize mission plans, and deliver training. The just-in-time mode of training simulated on the mission could be an important element of addressing the next "Houston, we have a problem" moment and without a doubt will be part of the answer to many smaller problems.

Specifically, the NEEMO crew was practicing the kinds of tasks they would have to undertake during the exploration of a near-earth asteroid, which is what President Obama has set as NASA's next step in manned space exploration. The proposed mission, targeted for 2025, would send astronauts on a 270-day mission, most of which would be spent traveling to the asteroid, maneuvering to match its orbit, and then returning home. NEEMO specifically simulates the exploration portion of the mission, which would be about a two-week sprint to explore the space rock.

The NEEMO 16 crew included Commander Dottie Metcalf-Lindenburger of NASA; European Space Agency astronaut Timothy Peake; Japan Aerospace Exploration Agency astronaut Kimiya Yui; and Steven W. Squyres, Goldwin Smith Professor of Astronomy at Cornell University and chairman of the NASA Advisory Council. Space fans will recognize Squyres as the principal investigator behind the Mars Exploration Rover mission that included the Spirit and Opportunity robots. The NEEMO crew began and ended every day with a "space walk" by two of the astronauts--or aquanauts--coordinated by two other crew members aboard Aquarius. The mission also received logistical support from two crew members associated with the reef base. 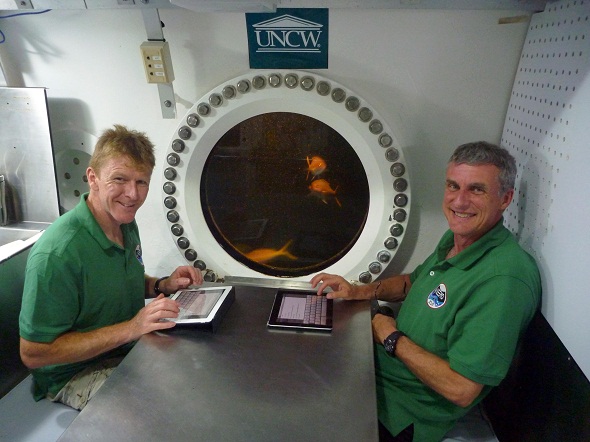 I heard about the use of iPads in this context from the people at Brainshark, who wanted to boast about the use of their SlideShark app for iPad and iPhone by the NEEMO crew to display PowerPoint presentations.

And some duct tape.

The repair of the ISS power system recently used improvised tools to accomplish the task. There may not be any mission that didn't require some improvising.
Reply  |  Post Message  |  Messages List  |  Start a Board