IT pros from Boston's professional teams -- the Patriots, Celtics, Bruins and Red Sox -- met at Gillette Stadium to talk tech, the future of live sports, and how to deliver real-time, high-definition video to a crowd of 70,000. 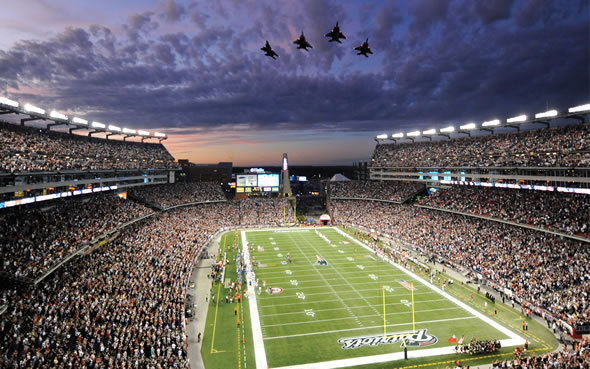 The good news for IT pros in less-glamorous organizations than the New England Patriots is that some problems are universal. The Pats are slated to face the Baltimore Ravens Sunday, aiming for their sixth trip to the Super Bowl in 12 years, but VP of content Fred Kirsch is more worried about building loyalty programs, managing social media, Payment Card Industry (PCI) compliance, and wrangling with the powers that be (in this case, the NFL) about shaking loose permission to deliver exclusive content to customers.

The CIO Mobility Innovation Summit, held Jan. 15 at Gillette Stadium in Foxborough, Mass., brought together IT pros from all the major Boston teams to talk about the intersection of technology and sports. Hosted by Enterasys Networks, which beat out unnamed rivals to win a multimillion-dollar contract to light up Gillette with a WLAN capable of servicing 70,000 fans, the summit highlighted the hard reality faced by many of today's franchises.

Jonathan Kraft, president of the New England Patriots and co-chairman of the NFL's Digital Media Committee, put it bluntly: "Live viewing is at risk, unless you make it more engaging, special and unique."

A panel including Kirsch, VP of content for the Pats and a leader of the WLAN effort; Jay Wessel, VP of technology for the Boston Celtics; Lorraine Spadaro, VP of technology and e-business for the Boston Bruins; and Heidi Labritz, director of business applications/IT for the Boston Red Sox, offered perspective on how these franchises plan to improve the fan experience. "The metric is butts in the seats," said Labritz.

The Patriots have no worries in the near term; the team has sold out every game since 1994 and has almost 60,000 people willing to plunk down $100 each just to be on the waiting list for season tickets. But at an average per-person $112 ticket cost per game plus parking and food, Kraft said the Pats can't afford to be complacent. The question for all sports franchises, he said, is whether people will continue to make the trek to the park as television picture quality and interoperability via smart features improve.

Broadcasters have good reason to try and keep sports fans at home: The Patriots sold the TV rights to their next 256 games for what works out to $6 billion per year, said Kraft. And at CES, Sharp showed off an 80-inch, 8K ultra-high-definition set with 7,680 x 4,320 resolution -- that's about 16 times what current HDTVs offer. Sure, these sets will take a few years to go mainstream, but once you have one of those babies on your wall, are you going to pay upwards of $200, once all's said and done, to go sit in the freezing cold of a Massachusetts winter and munch on stadium food? And that goes double for franchises that aren't as successful as the Pats.

Kraft's not waiting to find out. The answer: Pervasive wireless in the stadium, exclusive content and apps, baby.

While I don't necessarily want to personally use iPads, tablets, and other mobile devices while I am enjoying a live sporting event, I would see a huge value in having an app that would allow me to order and pay for food and find out how long I would have to wait in line to use the restroom. I think these apps would add real value for fans who might otherwise be deterred from attending a live game. The ability to listen to coach-to-QB communications would also really entice me to spend money to get to more live games.
Reply  |  Post Message  |  Messages List  |  Start a Board
Editors' Choice
Hot Topics