Early supporters of Pebble Technology Corp.'s Kickstarter campaign will be the first to get their Pebble Time wearable devices.

Smartwatch aficionados looking for an option beyond current market offerings will soon be able to order the Pebble Time, a smartwatch which sports a 1.25-inch, color e-paper display with LED backlight. Pebble Technology Corp. has announced that the devices will start shipping on Wednesday to early supporters of its Kickstarter campaign.

More than 78,000 backers brought Pebble Time into being by pledging more than $20 million dollars on Kickstarter, according to the company. Those who participated in the campaign will be the first to receive the smartwatch as part of their reward package. The company is finalizing mobile apps to be available in time for the smartwatch's market debut.

"Production is now in full swing since bringing the factory online at the beginning of May," the company announced on its Kickstarter page. "With things moving along at this rate, we expect all Pebble Time Rewards to be manufactured by the end of the month."

The watch was offered at a discounted price of $159 to early backers, down from its $199 list price. Second-tier supporters will pay $179.

The Pebble Time, which can connect with a user's iPhone or Android smartphone, counts Jawbone, Evernote, RunKeeper, eBay, and Pandora among its partners. The Pebble Steel, made with stainless steel, is water resistant and has an optical hard coating for scratch resistance. It's slated to be available in July.

[ Does anybody really know what time it is? This guy does. Read NTP's Fate Hinges On Father Time. ]

The smartwatch features an array of sensors, including a 3D accelerometer, compass, ambient light sensor, and microphone. A USB charging cable with magnetic connector charges the battery -- for up to seven days, the company claims.

Apps are accessed via a new My Pebble screen, formerly known as the Locker. It allows users to organize what's on their Pebble by Watchfaces and Apps/Timeline. 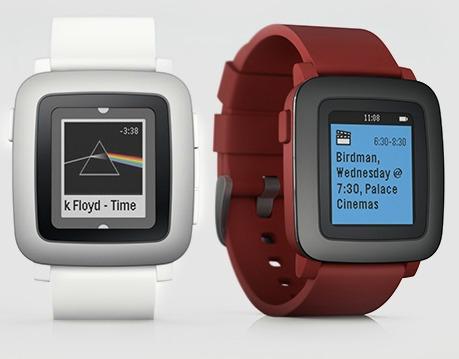 The launch follows Apple’s highly publicized and closely watched Apple Watch, which has met with mixed reviews even as it raises consumer awareness of smartwatches in general. LG and Samsung are among those offering Android-based smartwatches. NextMarket Insights projected in a 2013 report that the overall smartwatch market would grow from 15 million watches shipped in 2014 to 373 million by 2020.

[ Did you miss any of the InformationWeek Conference in Las Vegas last month? Don't worry: We have you covered. Check out what our speakers had to say and see tweets from the show. Let's keep the conversation going. ]

Nathan Eddy is a freelance writer for InformationWeek. He has written for Popular Mechanics, Sales & Marketing Management Magazine, FierceMarkets, and CRN, among others. In 2012 he made his first documentary film, The Absent Column. He currently lives in Berlin. View Full Bio
We welcome your comments on this topic on our social media channels, or [contact us directly] with questions about the site.
Comment  |
Email This  |
Print  |
RSS
More Insights
Webcasts
Detecting and Preventing Insider Data Leaks
Hybrid Cloud: The Great Balancing Act
More Webcasts
White Papers
Why Add Security to Your Skill Set and How to Do It
Accelerate Threat Resolutions with DNS
More White Papers
Reports
The State of DevSecOps Report
DNS Network Traffic Volumes During the 2020 Pandemic
More Reports

Daniel, I see your point. I felt the same way. I noticed that the nurse had a smart watch. I asked her if she liked it and why. She said that she's not going to take her phone out on the on her shift and then it allows her to see who is calling her and that she can reply with a brief, generic text message. she said it looks like she's just looking to see what time it is only her watch as opposed to using an actual mobile phone in her palm.
Reply  |  Post Message  |  Messages List  |  Start a Board

@daniel: While I agree with you, I also thought the iPhone, when it first came out, seemed frivolous.
Reply  |  Post Message  |  Messages List  |  Start a Board

@Angel: Your comment just goes to show the extent of Apple's branding success.  We're not just looking at smart watches and comparing; we're comparing them to the Apple Watch specifically -- looking to that particular device as the leader.
Reply  |  Post Message  |  Messages List  |  Start a Board

I think that although the Pebble smartphone idea is a joke it's probably not far from the truth. I struggle to really understand just what someone would need a smartwatch for – it just seems to me it is a peripheral for smartphones, right?
Reply  |  Post Message  |  Messages List  |  Start a Board

Interesting. I look forward to hearing the reviews for this smart watch, especially in comparison to the Apple watch.
Reply  |  Post Message  |  Messages List  |  Start a Board

In other news, Pebble Time will soon release a smart phone -- but the smartphone only works if you have the Pebble Time Smartwatch.  /sarcasm
Reply  |  Post Message  |  Messages List  |  Start a Board
Editors' Choice
Hot Topics