Samsung's latest wearables include a fitness band and completely wireless earbuds. Both items can track your workout, play music, and manage notifications.

The Gear Fit2 is a second-generation fitness band from Samsung that picks up where the original left off. The device features a 1.5-inch curved Super AMOLED display with 432 by 216 pixels. It is powered by a 1-GHz dual-core processor and has 512 MB of RAM and 4 GB of onboard storage. Built-in sensors include a gyroscope, GPS, a barometer, an accelerometer, and a heart rate monitor. It packs a 200mAh battery. It's compatible with Android devices that have at least 1.5 GB of RAM. The Gear Fit2 itself runs Samsung's Tizen operating system.

The Fit2 is able to automatically track activities (such as walking, running, cycling, rowing, and elliptical) and figure out exactly what the wearer is doing. The GPS and heart rate monitor are able to track workouts for distance/route covered and how hard the wearer exerts himself or herself during the activity. 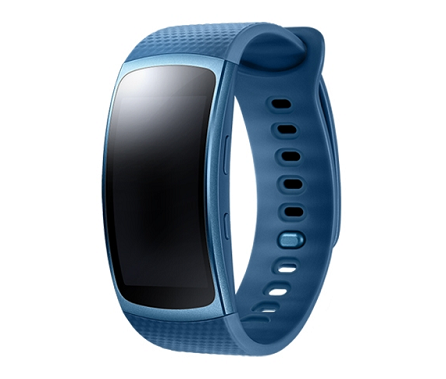 Samsung says the Fit2 can share data seamlessly with its own S Health app (found on Galaxy smartphones) and with handful of third-party fitness applications. The device can alert owners to incoming calls, email, messages, and calendar notifications so they are always informed. Further, the Fit2 includes a standalone music player so people can listen to music (via Bluetooth) while they work out.

The Gear IconX wireless earbuds offer many of the same features in an entirely different form factor. The IconX is truly wireless. Each earbud is a fully contained unit with its own battery -- there is no wire connecting the two. The earbuds include variously sized tips and a wing to help them remain in place.

It's rather amazing what Samsung was able to stuff into such a small package. The IconX earbuds each contain a 47mAh battery. The pair includes an accelerometer, a heart rate monitor, and capacitive touch controls. The IconX has 4GB of storage built in, so it can play music without a nearby smartphone. Each earbud has its own dynamic driver and two microphones. Users will need an Android handset to use them.

[Read Wearable Users Happy With Hardware, Less So With Apps.]

Samsung says the IconX can track distance, speed, duration, heart rate, and calories burned during workouts and seamlessly sync the data back to S Health. (Samsung didn't say if the IconX supports third-party fitness apps.) A Voice Guide, available in 15 languages, can provide feedback during workouts as well as help manage music playback.

Samsung didn't share a few pertinent details about the IconX, such as price and exact availability. The company also didn't saw how long those little batteries will last. The carrying case, however, includes a 315mAh battery. It can recharge both earbuds twice.

The market for wearables is forming two major segments, says IDC: smartwatches and fitness bands. Samsung has smartwatches locked up with the Gear S2 Classic series and now has a nice offering of fitness-minded products.