The eight-bay system for SMBs comes standard with a 6 Gb SAS interface, a data transfer rate of 800 MB per second, and a maximum of 24 TB.
Antone Gonsalves
Contributor
April 15, 2011 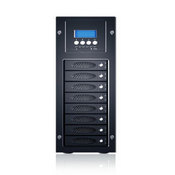 The MR8X6 has a data transfer rate of more than 800 MB per second, making the product suitable for video editing or server database applications, according to Sans Digital. The system provides storage expansion of up to seven more MS8X6s, each with a maximum of 24 TB, using the hardware RAID controller in the systems.

"The MobileRAID MR8X6 is a versatile RAID storage product that could be utilized in a large variety of data storage applications," Stanley Chan, director of business development for Sans Digital, said in a statement.

Other enterprise features include remote storage management and email notification for critical events. All these features come standard.

The MR8X6 provides hardware RAID 0, 1, 5, 6, 10, 50 and 60 data protection against hard drive failure and supports clustering applications and storage failover through dual-channel SAS interfaces. The system has a built-in processor for handling RAID algorithmic calculations, offloading the workload from the CPU in the host computers or servers.

The MobileRAID MR8X6, introduced Wednesday, has a starting price of $3,750.

Sans Digital also provides rack-mount RAID storage. The company launched last month the AccuSTOR AS108XP, a 1U eight bay system that supports 2.5-inch SATA or SAS hard drives or solid-state drives. The system has a data transfer speed of more than 650 MB per second and is suitable for video editing, server database, or data backup applications. The starting price is $939.