SEARCH
A minimum of 3 characters are required to be typed in the search bar in order to perform a search.
Announcements
Event
Discover the latest in hybrid work trends, including new technologies - Learn more at Interop.com!
Event
SupportWorld Live: May 15-20, 2022 | MGM Grand, Las Vegas, NV
PreviousNext
Mobile
4 min read
article

Symantec compares the security architecture of mobile operating systems from Google and Apple, but OS improvements are only part of the story.
Kurt Marko
Contributing Editor
July 05, 2011
In light of Research In Motion's continuing poor financial performance, executive departures, and tepid tablet sales (subscription required), it's clear that the competition for smartphone and tablet pre-eminence is now a two-horse race: Android and iOS, via Google (and its stable of hardware licensees) and Apple. Estimates show these two now account for almost two-thirds of the smartphone market and are the two platforms gaining share at the expense of RIM, Microsoft, and Palm/HP.

Since your next phone or tablet will almost certainly be running one of these operating systems, what's a security-conscious buyer to do? Sure, most people are swayed by more subjective factors, such as Apple's sex appeal or Google's openness and product diversity, but if you're a paranoid, tech-savvy IT type, which platform is least likely to cause security headaches for you and your enterprise? To help answer that question, security researcher and Symantec chief security architect Carey Nachenberg has put both systems under a microscope, detailing his findings in a new white paper. For those who don't want to wade through the 22-page report, here are a few highlights.

The good news is that mobile operating systems, both of which are Unix variants (Android based on Linux and iOS on OS X, which has its roots in FreeBSD), are more secure than a Windows PC. This is probably not too surprising since they build on years of experience in OS security and are designed for more narrowly focused tasks, unlike a general-purpose, do-everything PC. Still, as the paper highlights, both embody most, if not all, of these five "security pillars":

-- Traditional access control: techniques such as passwords and idle-time screen locking to protect the device itself. -- Application provenance: curation (testing, verifying, and tamper-proofing) of individual applications, and subsequent secure signing (with the author's identity) and hashing (using a digital signature). -- Encryption: protecting data on the device in the event of loss or theft. -- Isolation: limiting an application's ability to access sensitive data or system resources on a device. -- Permissions-based access control: granting each application a set of permissions that limits its access to specified device data and systems.

Nachenberg uses two categories to evaluate each mobile operating system: first, how resistant it is to various modes of attack, and second, how well it implements the above-mentioned five security strategies. On both counts iOS wins, but neither OS makes the honor roll (see charts below). When it comes to attack resistance, iOS scores a C-plus (on a 4.0 scale) versus Android's D-plus. In fairness, neither does anything to mitigate social engineering attacks, so if we omit this category from grading, iOS gets a B while Android pulls a C-minus.

Yet OS improvements are only part of the security story, because by automatically synchronizing email, calendars, contacts, photos, and even document files (via services like Dropbox, Evernote, and Apple's forthcoming iCloud), tablets and smartphones are veritable magnets for sensitive personal and enterprise data. While OS features such as process isolation and data encryption greatly improve information security, they're not foolproof, particularly if a persistent, knowledgeable attacker actually gets possession of a device. As Nachenberg concludes, "This back door connectivity results in the loss of potentially sensitive enterprise data across third-party systems that are out of the enterprise's direct control and governance."

While it's valuable for IT to evaluate the merits of each platform's security architecture (and on this score, Apple is leading) before formally adopting a mobile device for enterprise use, it's more important to develop plans for controlling and managing mobile devices, regardless of platform. This means investigating add-on mobile security utilities such as antivirus and VPNs, central mobile device management systems, and data loss prevention software. As Nachenberg rightly points out, as consumer devices, smartphones and tablets typically trade off security for convenience and usability; however, through planning and judicious deployment practices, IT can tip the balance and reduce the risks of these increasingly popular information appliances. 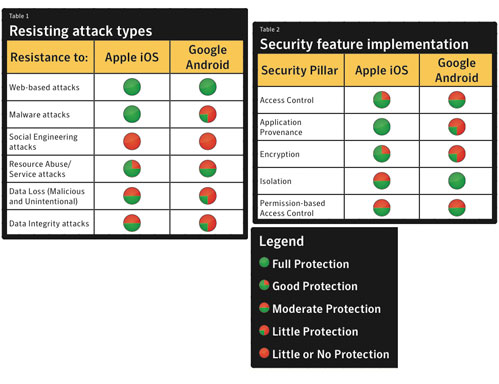