SEARCH
A minimum of 3 characters are required to be typed in the search bar in order to perform a search.
Announcements
Report
Find out what you need to know so that you can plan your next career steps and maximize your salary.
Event
Explore strategies, new technologies, and best practices to provide a secure infrastructure - Learn more at Interop!
PreviousNext
Mobile
News 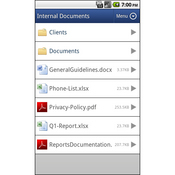 ShareFile Mobile Folders
ShareFile on Thursday announced both iPhone and Android applications for its file sharing and storage platform.

The company had previously offered non-native mobile access, but decided to build apps specifically for Apple's iPhone and Android-based devices in response to a growing number of customer requests, according to ShareFile CEO and founder Jesse Lipson.

"Native mobile applications have been something that our business users have started to increasingly demand, especially over the past six to 12 months," Lipson said in an interview. The Android app is available now, with the iOS version to follow in early Q2. While the iOS is optimized for the iPhone, it should work with the iPad, as well.

According to Lipson, the iPhone and Android apps were a logical next step in ShareFile's product development after launching its Sync feature earlier this year. Sync enables one- and two-way synchronization between a customer's PCs and their Web-based ShareFile folders.

The majority of ShareFile's customers are small and midsized businesses. The new mobile apps allow users to access their ShareFile folders on the go. Lipson gave a personal example: On the way to a recent meeting, he realized he'd saved the most current copy of his PowerPoint presentation locally on his desktop. An employee dropped the file in his Web-based ShareFile folder and he accessed it from his phone.

Apple iOS and Android were relative no-brainers as ShareFile's first optimized mobile apps, according to Lipson. But the company's approach was geared around adding other device-specific apps not too far down the line. ShareFile used the open source PhoneGap platform rather than build each app from scratch, which Lipson said should streamline additional mobile development. His company expects to roll out BlackBerry and Windows Phone apps, for example, in the near future.

Lipson said the boom in mobile devices and platforms has created a development headache for software companies, especially at smaller firms like ShareFile. Building applications just for the Web, he said, is a relative walk in the park.

"Now it's getting back into this fragmented situation where every time you build a new feature you have to build it for the Web, iPhone, Android, now with tablets there are different screen sizes, BlackBerry, Windows Phone," Lipson said, noting that there's fragmentation even within Android. "It gets to be very cumbersome, so we've chosen to try to work with this higher-level platform."

ShareFile used PhoneGap to build the core of the application in HTML and JavaScript. Its own development team then wrote the native code for the iPhone and Android apps. "Overall, it definitely saved it quite a bit of development effort to do it that way," Lipson said.

Tablet optimization is next on the horizon for ShareFile, and will eventually supersede smartphones in terms of the company's product development priorities. Though the core functionality of its mobile app will work on tablets, ShareFile is looking to tailor its mobile interface for various screen sizes and operating systems. Given the influx of new tablets on the market, that is easier said than done.

"Our team is working through: How do we efficiently build out a tablet strategy without having to build 12 different versions of the ShareFile app?" said Lipson. "Over the long term, the tablet will probably be more of a development focus for us than the phone."