Odyssey Marine Exploration uses the latest sonar technology and robotic divers to unearth historic vessels from the ocean floor.
Kelly Sheridan
Staff Editor, Dark Reading
July 12, 2013
Odyssey uses two working-class ROVs, Zeus and Zeus 2, to physically inspect wrecks and obtain artifacts. Both use limpet suction devices on their "arms" to recover items ranging from porcelain figurines to 600-pound objects. Yet there is one more big step before excavation can begin. "Before we disturb the site or touch anything, we have to have a record that shows the site as it was," Gordon said.

Thousands of high-resolution photographs are taken and stitched together to form a singular image called a photomosaic, or pre-disturbance survey. To record the GPS coordinates of the photomosaic, the team places acoustic transponders on the wreck site and seabed. Measurements are taken acoustically by bouncing sound waves between the wreck, transponders and datum points.

Once the photomosaic is created, the ROV physically inspects the wreck and recovers artifacts. GPS coordinates -- latitude, longitude and depth -- of each artifact are recorded while also accounting for tidal flow. The team can then geospatially recreate the wreck site with accuracy and show where objects were found in relation to the photomosaic.

The ROV is operated by technicians on board the Explorer who rely on high-definition cameras, digital still cameras and HMI lighting to navigate the wreck. During the excavation, the ROV sends digital data to the Explorer, where it is interpreted as positioning data. The inertial navigation system in the ROV is constantly updated, leading to a two-way stream of data between the Explorer and the ROV. Odyssey's DataLog program records all GPS data in real time so that the team knows where they are working, and exactly where each artifact comes from, within a few centimeters' accuracy. Using satellite broadband technology, the team transmits large data feeds back to the mainland.

This technology is sufficient to uncover most of the wrecks that Odyssey has discovered; however, the SS Gairsoppa is an exception. Because of the wreck's depth, Odyssey chartered the deep-sea Seabed Worker, which contains steel-cutting capabilities and working-class ROVs rated to work at such depths.

"Really, the hardware are just tools," said Gordon about the ease of swapping vehicles. "The methodology we use and the expertise to manage projects, those are unique to Odyssey." 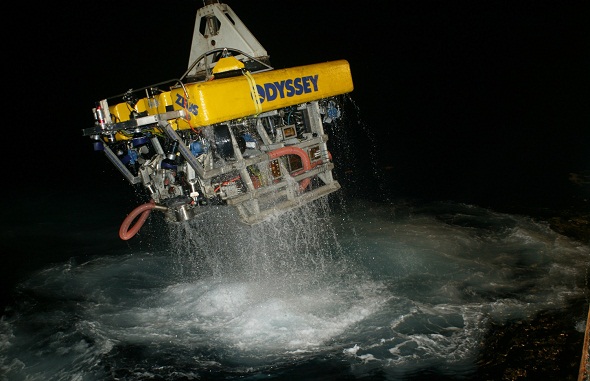 The Zeus remotely operated vehicle returns to the surface.

Since its founding, Odyssey has mapped over 17,000 square miles of seabed. Ten thousand hours have been spent using advanced robotic technology to explore shipwrecks that date from 1622 through the 20th century.