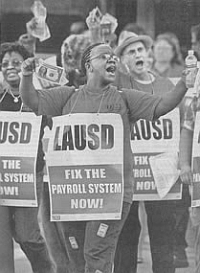 One teacher, interviewed by NPR has been receiving a monthly paycheck for $96.01 since June. Seven months, two consulting firms, and $10 million worth of fixes later, payroll problems stemming from the three-phase SAP rollout persist.

Did I say problems? The LA City Beat prefers to characterize the system "issues" as a "felony act of callousness and stupidity".

A similar situation on a smaller scale reportedly occurred at LA Community College, and at the San Bernardino and Minneapolis school districts.

While the teachers union preps for organized protests, school district officials are in talks with Deloitte Consulting, the firm hired to manage the system integration. For the record, Deloitte isn't saying much beyond a written statement that asserts the company fulfilled its contractual obligations, NPR reported yesterday.

The lesson here? Choose your vendors carefully, and work closely with them. Don't be left holding a sack of problems bigger than what you started with.