Thoughts On The Motorola Droid

The Droid has a very sleek and angular design. Even though it has a full QWERTY keyboard, it's barely thicker than an iPhone - it'll slide into just about any of your pockets. It definitely has more heft than other devices, but I think it has a good feel in the hand. One thing that bothered me is the volume rocker on the spine of the device feels very cheap and loose. Overall though, I think it's an excellent design that will turn some heads (if you care about those things).

The 3.7-inch screen is ample, if a bit narrow, and it's an absolute delight. The 480 by 854 resolution means text is sharp and crisp, and the Droid has delivered the best reading experience I've ever had on a smartphone. The colors are vivid as well, and the capacitive touch screen is extremely responsive most of the time. One thing I didn't like is that the back, menu, home, and search buttons on the face aren't physical buttons. This means I would sometimes accidentally hit these while trying to interact with the screen. This only happened a few times, but it can get annoying. The screen's also a smudge magnet. Despite these criticisms, it's very responsive and is on par with anything the competition is doing.

For those hoping Motorola cracked the nut and delivered an iPhone-like touch screen with a BlackBerry-like keyboard, I got some bad news: the keyboard's not that good. It's not raised enough, too tough to differentiate between keys by touch, the feedback's not sufficient, and there's not enough "clickiness" for my liking. The d-pad's responsive but generally useless. The good news is that I have found no need to use this cruddy keyboard because the virtual one is great. I wish the individual tiles were bigger, but I've been able to blaze out long messages quickly and accurately with the on-screen keyboard. The auto-correct software is really good, easy to program in new words, and it adjusts to your tendencies.

I know one of the main selling points of the Droid is to have a keyboard, but this would have been a better device with a touch-only interface. It would shave off some of the thickness, and it would be the best-looking smartphone on the market. So, it sounds like I hate the Droid, huh? I'm still very satisfied with my purchase but I do think there's room for improvement on the industrial design without hampering the user experience.

I've fallen for Android. It's not as polished as the iPhone, or as strong of a messaging device as the BlackBerry, or even as fluid as webOS, but I dig Google's mobile operating system. The Droid is the first device to be powered by Android 2.0 and it brings a host of new features. One of the most-needed new features is the ability to manage multiple e-mail accounts, and the incredibly useful Google Maps Navigation. This turn-by-turn navigation service is highly accurate (as long as you have a steady data connection) and will even switch to Street View once you reach your destination. This should be coming to all the other platforms eventually, but for now this is one of the killer, exclusive features for the Droid. 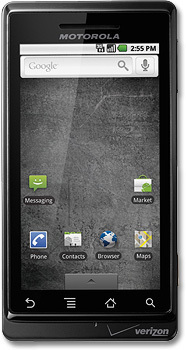 Other than that, there aren't too many noticeable changes with the latest rev of Android. Like I said in the HTC Hero review, Android's pretty much a little computer in your pocket. This has negatives like having to manage tasks, but I'm very impressed with the functionalities it provides. The multitasking is what really makes me smile - I can download a podcast of any length in the background, switch to a browser to load a page, hop over to the Android Market while the page loads, and then flip back to the browser when it's loaded. The Droid has the horsepower to handle this too, as I've yet to run into lag or long wait times.

Like most Android devices, the Droid has good integration with Google's online services. It was a breeze to get Google Voice working, Droid has the best Gmail client out there, and the calendar integration is solid as well. The Android Market is also rounding into shape with more than 12,000 programs, including apps from all the major publishers you'd want. One complaint is that there are only three panels on your home screen while other Android devices have up to seven screens to fill up with apps. As I've mentioned before, Android still has the best notification system in the business. You're alerted about new e-mails, texts, updates and more in a very non-obtrusive way that is easy to manage.

I have to warn you though, even though the enterprise features are boosted, I still wouldn't recommend this as your primary device for all mobile professionals. As Michael Gartenberg points out, the Exchange support is not up to snuff, there's little encryption, and the remote management capabilities are not as robust as what most IT departments. It's a really great device if you're deep into the Google ecosystem like I am though.

A big advantage the Droid has over the iPhone is that it uses Verizon's superior network and the smartphone delivered great voice and data coverage all over San Francisco. The call quality was excellent, and recipients said I sounded loud and clear. One issue I had is that there's no physical call buttons - every call is initiated or received via the touch screen. I also have to drill through a menu to accept calls because of Google Voice, so I spend far too much time looking at my phone while accepting calls.

The 2.0 software has also boosted the Webkit-browser, and it's a really nice Internet surfing experience. I think the high-resolution screen cures a lot of ills because it's very easy to read text on nearly any Web site, and the zooming, for the most part, is intelligent and smooth. JavaScript support is pretty good, the visual bookmarks are well-implemented, and all the sites I visit on a routine basis are easy to view and navigate.

As a music machine, the Droid (and Android in general) is a bit hampered by the lack of desktop syncing software. I don't mind that much because I fill up the 16 GB with podcasts I download over the air, or Internet radio from Pandora or Last.fm. There's also the ability to mount it as a drive and drag and drop tunes or videos, and there's on-deck access to Amazon's MP3 store. Videos look incredible on the screen - colors are vivid and I didn't run into any audio/video synchronization issues. I think it's an above-average media player, but the lack of syncing software does put it behind the iPhone and even BlackBerry in terms of ease of use.

While rereading the text I just wrote, I realized there are tons of criticisms about the Droid. Please don't get me wrong - I really like this smartphone and it will be my primary device for at least a year. It's a highly-capable device that may not be right for every mobile professional, but Google fans will be in love. It's the best phone on Verizon, the best phone with Android, and may very well be the best phone we see in 2009 (my top five list is coming in a few weeks).

Let me know how your time with the Droid has been or if you have any other questions about it. Feel free to drop me a line at [email protected] or tweet me @marinperez.