Thoughts On The Palm Treo Pro 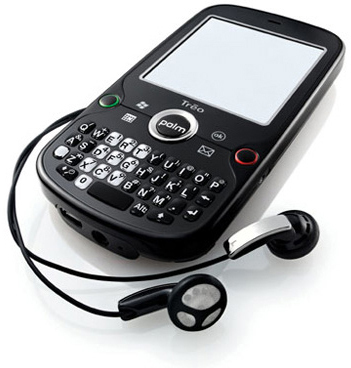 First of all, the Pro is not an iPhone competitor. Sure, it can play music and video well with a mobile version of Windows Media Player, but this handset is strictly aimed at the enterprise. Setup is quick and easy, and the device comes with no software -- simply connect it to your computer and the software loads from the phone.

In terms of design, the Pro is gorgeous. It's sleek, and thin (measures 4.4-by-2.3-by-.5 inches), and it just feels good in the hand. It will easily slide into your pocket, and the black finish is eye-catching -- although it's a smudge magnet. For better or worse, the QWERTY keyboard is similar to the Cento's. I had no problem tapping out e-mails, but I know some prefer larger keys.

Palm also has done a great job with the shortcut keys. There's a one-click Wi-Fi button on the side, volume and quick-launch camera buttons, and soft key shortcuts to launch mail and calendar. I love the ringer switch on top: simply slide it over to change your phone from ring to silent. It's a little thing, but I can't count how many times I've forgotten to turn my ringer back on.

The Pro rocks Windows Mobile 6.1 Professional Edition, which means your company probably already has an established ecosystem of software and hardware to go with it. Of course, it also means you'll be yelling at your phone because of the sluggishness and clunky interface. Palm has done things like add the shortcut keys and put a Google search bar on the home screen, but you still have to click through far too many menus.

It's compatible with Microsoft Exchange servers, so push e-mail, calendar, and contacts are no problem. You also can set it up with POP3 and IMAP e-mails, which I did quickly and easily. The phone has Microsoft Office Mobile Suite, so you can view and edit Word and Excel documents, as well as view PowerPoints. I have to say, viewing a PowerPoint on a smartphone normally looks like crap, so I was pleasantly surprised at how good it looked on the Pro. Additionally, Apple's App Store may get all the hoopla and media coverage, but there are thousands of applications for Windows Mobile for work and play.

There's also a PDF reader, various other business apps, and the dreadful mobile version of Internet Explorer. I immediately threw Opera Mobile 9.5 on it and was happily surfing. In terms of connections, the HSPDA connection was pretty darn zippy, and the 803.11 b/g Wi-Fi was simple to turn on and worked well.

The 2.5-inch touch screen sports a 320-by-320 display, and it's responsive and bright. I did find myself having to use the stylus for touch input, and some may not like that. The display won't wow you like the BlackBerry Bold's screen, but it's definitely top notch.

I didn't get a chance to play around with the GPS that much, but I do know that Google Maps comes preloaded and your contact book can be integrated with it. CNET's Bonnie Cha suggests road warriors subscribe to TeleNav for robust navigation features. The camera would probably be an afterthought for users, and at 2-megapixels, it should be. There's a much-appreciated standard 3.5-millimeter headphone jack, so listening to music, or watching video, is a breeze. The handset's memory can be expanded to a whopping 32 GB via the mircoUSB slot. Unfortunately, you have to take off the battery cover to access the slot, but at least you can leave the device on.

Is the Treo Pro right for you and your company? It's hard to say. The Windows Mobile software does help streamline some infrastructure and save on costs, it should be a relatively easy device for an IT department to manage, and it's a powerful workhorse. But the device is selling in the U.S. unlocked for $549, and it's not necessarily better than other Windows Mobile smartphones that can be had for less. While having an unlocked phone can have its advantages (especially if you're a globe trotter), you'll have to use AT&T's services to get the most out of this phone's mobile broadband capabilities any way.

Still, bulk buyers won't be paying that price any way, and if you're looking for a true business-class device, you should take a hard look at the Treo Pro.